How to Use Fear to Your Advantage 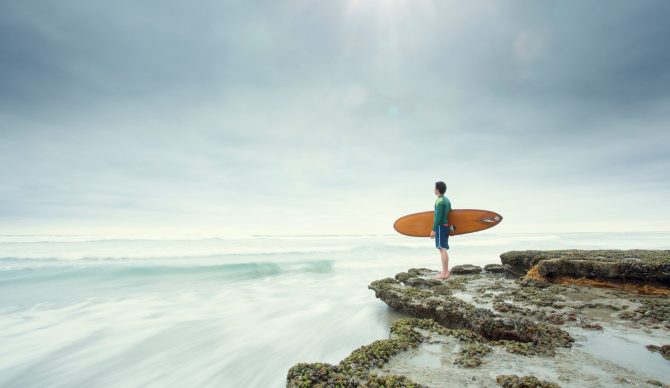 Editor’s Note: Enroll in Jaimal Yogis’ Guide to Meditation and Mindfulness to learn more about combatting negativity bias, and other mindfulness practices. The Inertia readers get a 10% discount with code INERTIA10.

I’ve spent years talking to neuroscientists, psychologists, and athletes who surf the biggest waves and jump off the biggest cliffs about fear. One thing I’ve learned from them is that you should forgive yourself for everything you feel. We shouldn’t take responsibility for our emotions because our emotions are faster than we are.

So how do we harness emotions that come naturally, even negative ones like fear, and use them to our advantage in athletic performance?

When you’re hit by a dagger of your own making or a real dagger that someone throws at you — the very things that wrap us up in negative emotions — you need to forgive yourself or accept yourself for feeling. Often, especially for people who want to start improving themselves or want to become more peaceful, a quick pile of judgment can come with noticing this new wave of emotions. We judge ourselves by saying “I’m not doing this right. I’m still feeling frustrated,” and then any amount of negativity exacerbates with believing we should be feeling different.

Those thoughts and feelings work lightning fast, and they work before you’re even aware of them. Our biological systems have saddled us, to some extent, with emotions that we don’t always need in the modern world. In the wild, we needed to use fear to survive. But now our amygdala and the limbic system don’t necessarily differentiate between a newscast about something scary and the real thing.

As one of my meditation teachers, Robert Thurman, says, meditation is an evolutionary sport. There are plenty of scientific studies on the effects of mindfulness on the brain and we’ve learned benefits like, for example, after just eight weeks of about 30 minutes a day, the amygdala (your brain’s fear center) actually decreases in size. Stories of higher functions about happiness and compassion and well-being come as the gray matter in those areas of the brain increase. We’re essentially evolving in eight weeks of mindfulness, physically changing and restructuring the brain.

So instead of judging yourself for noticing those negative emotions when they start to pile on, you can stop and say, “Oh, wait, no, I’m a mindfulness practitioner. It’s okay to feel. It’s okay to have this wave. It got there before I did. That’s natural. That’s just part of being alive.”

And this is when you have a chance to decide what you’re going to do with that energy.

This is energy that you can use to do things. Athletes have mastered this and so have expert surfers; feeling a little adrenaline, getting excited about it, and actually transitioning that to a flow state. If you have zero excitement or zero adrenaline, you don’t necessarily get to peak performance. So what we start to learn is that the fear and emotions that come naturally — the ones we are inclined to judge negatively — are necessary for performance. But we can make the most of this with mindfulness training.

This positive framing is something that usually has to come first from being mindful of what you’re feeling. Before you’re mindful, you’re really just living from that place. You’re just in the churn of the wave, or maybe you get lucky and you have a great mindset already. Some champion athletes are naturally this way, going after challenges and continually opening and expanding their comfort zones. But most of us have to learn it.

None of this means you shouldn’t sometimes heed fear. Sometimes, fear is telling us something that’s very rational and reasonable, and so I’m not trying to say fear is all in your mind. But I am saying you always have an opportunity to say, “Fear can help me. Fear can help me train methodically for (surfing) Mavericks or whatever wave intimidates you.” You’re stepping back through mindfulness and you’re the director of your narrative, rather than the fear-based narrative running you.

Editor’s Note: Enroll in Jaimal Yogis’ Guide to Meditation and Mindfulness to learn more about combatting negativity bias, and other mindfulness practices. The Inertia readers get a 10% discount with code INERTIA10.