A Danish Community Spent $150,000 to Clean Up a Beach, then Dropped It All Back in the Ocean 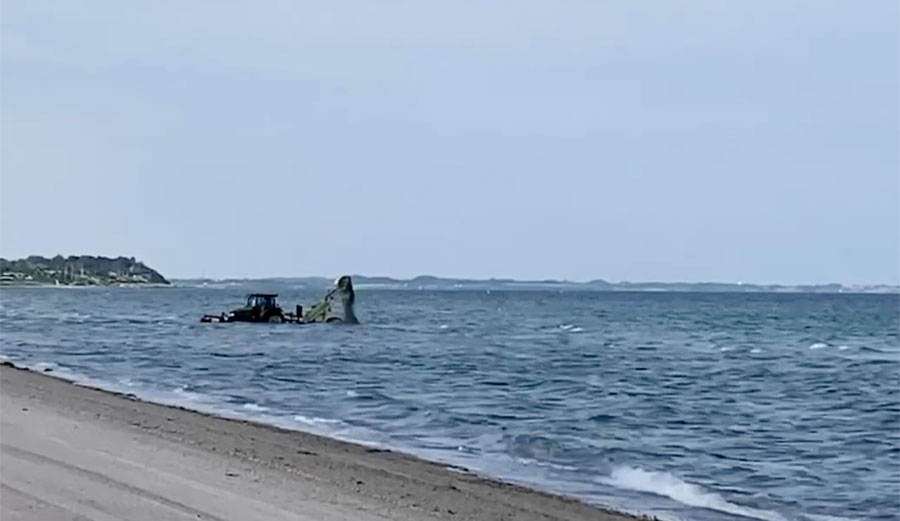 Beach cleanups are generally a good thing. A bunch of like-minded, environmentally concerned people take to the sand to pick up as much collective trash as possible. It’s a never-ending project, of course, but it goes without saying that if you enjoy the beach, you should, as the saying goes, “leave the beach cleaner than you found it.” But in an attempt to make the beach look a little nicer, a small Danish community recently did something….dumb.

According to reports, the Slagelse Municipality spent $150,000 to have a bulldozer remove seaweed from Stillinge Beach. They did it twice a week during the summer months — which seems like a decent undertaking. Tourists enjoy sand more than seaweed, after all. The problem, however, is what they did with it all: they simply carted it back out into the sea, apparently just a few yards off shore, and dropped it back into the water. Unfortunately, all that seaweed the bulldozers moved was full of garbage. Torkel Gissel Nielsen, a professor at the Technical University of Denmark, told the DR, the Danish Broadcasting Corporation, that the practice was “completely idiotic.”

“This is by no means a helping hand to nature,” Katherine Richardson, a professor in biological oceanography at the University of Copenhagen, wrote in an email to Vice. “This is about one thing — convenience for beach goers.”

Villum Christensen, the Deputy Mayor of the Slagelse Municipality, defended the practice. It wasn’t necessarily to make a long-lasting environmental impact. Instead, it was simply to make the beach look tidy. He told DR that beach goers want the beach to be neat and clean, like vacation destinations in Southern Europe. “We all have gone down south to the clean beaches in Mallorca and Gran Canaria,” Christensen said. “It’s from there that I have taken the inspiration that when you come to Stillinge Beach, it should be neat and clean.”

Villum went on to explain that smaller bits of trash, like little pieces of plastic detritus and cigarette butts, will “end up [in the ocean] for the most part either way.”

And while that may be a depressing truth, it’s only a depressing truth because we frankly suck at cleaning up our messes. There are a few projects here and there, most notably Boyan Slat’s Ocean Cleanup, that will make small dents in the problem, but unless we figure out a way to stop throwing our crap into the rivers and oceans, we’ll still be facing a very large plastic problem for… well, forever.