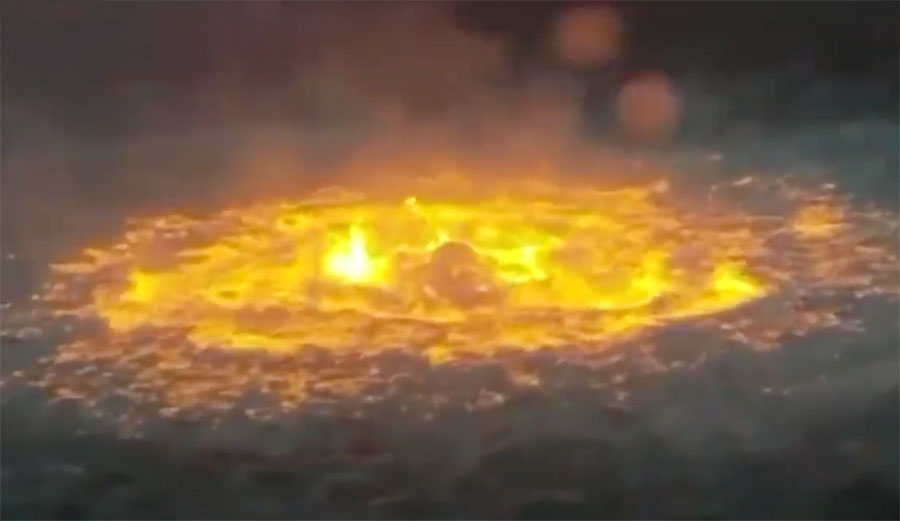 A screenshot from aerial video of the “eye of fire” in the Gulf of Mexico on July 2. Image: Screenshot/YouTube

A few days after a video of a huge fire in the ocean off Mexico went viral, Pemex, the company responsible, declared that no environmental damage occurred. Pemex also stated that the fire was caused when lightning struck a gas leak. Video immediately caught the eye of the internet, which dubbed the blaze the “eye of fire” in the Gulf of Mexico.

The fire, which started in the early morning hours of July 2, took nearly five hours to extinguish. According to reports, it started after gas from a leaking underwater pipeline bubbled to the surface and was struck by lightning.

The pipeline that caught fire was connected to a platform on Pemex’s flagship Ku Maloob Zaap oil development. No injuries were reported, and Pemex said it would investigate the cause at the time. “The turbomachinery of Ku Maloob Zaap’s active production facilities were affected by an electrical storm and heavy rains,” the Pemex incident report read. The report also noted that crews used nitrogen to get the blaze under control.

Although the company stated that its crews were able to avoid any environmental damage, it should be noted that Pemex has a long and flawed track record of major industrial accidents at its facilities.

Gusatvo Alanis, a board member with Mexico’s environmental law center CEMDA, told Reuters he thinks it is much too soon to conclude that the fire caused no environmental damage. According to a statement signed by more than two dozen environmental groups, including Greenpeace as well as CEMDA, Pemex should commit to creating a “detailed study of the (environmental) impact caused by the fire” as well as a plan to repair the damage.