Australia’s Soil Could Be Full of Microplastics 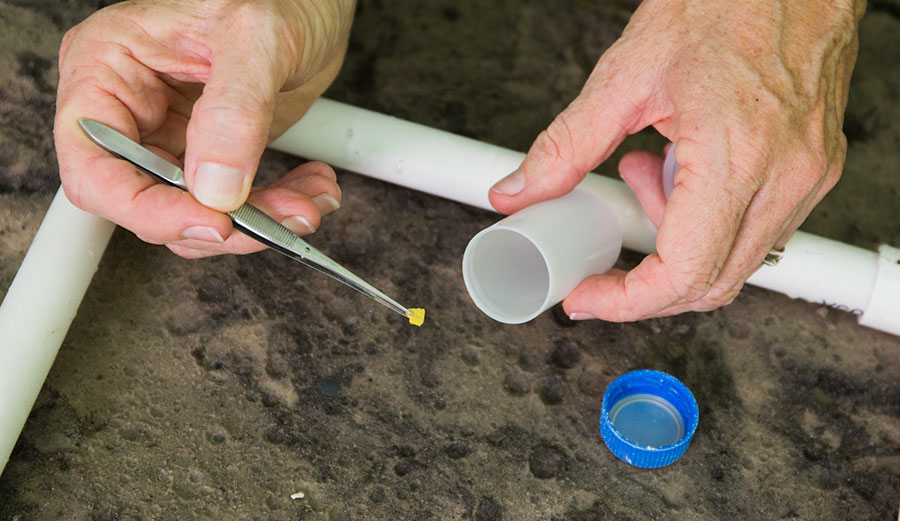 Microplastic in the soil is extremely difficult to track (or remove). Florida Sea Grant, CC BY-NC-SA

Microplastics in the ocean, pieces of plastic less than 5mm in size, have shot to infamy in the last few years. Governments and businesses targeted microbeads in cosmetics, some were banned, and the world felt a little better.

Dealing with microbeads in cosmetics is a positive first step, but the reality is that they are just a drop in the ocean (less than a billionth of the world’s ocean).

Microplastics in soil may be a far greater problem. Norwegian research estimates that in Europe and North America, between 110,000 and 730,000 tonnes of microplastic are transferred to agricultural soils each year.

Here lies the issue: we know almost nothing about microplastics in global soils, and even less in Australian soils. In this article, we take a look at what we do know, and some questions we need to answer.

How microplastics get into agricultural soil

Sewage sludge and plastic mulch are the two biggest known contributors of microplastics to agricultural soil. Australia produces about 320,000 dry tonnes of biosolids each year, 55% of which is applied to agricultural land. Biosolids, while controversial, are an excellent source of nutrients for farmland. Of the essential plant nutrients, we can only manufacture nitrogen. The rest we must either mine or recycle.

Sewage treatment plants receive water from households, industry, and stormwater, each adding to the load of plastics. Technical clothing such as sportswear and quick-dry fabrics often contain polyesters and polyamides that break off when clothes are washed. Tire debris and plastic films wash in with the stormwater. Treatment plants filter microplastics out of the water, retaining them in the sludge that is then trucked away and spread over agricultural land.

In agriculture, plastic mulch suppresses weeds, keeps the soil warm and damp to assist germination, and improves yield. Over time, these mulches break down, and some fragment into smaller pieces.

Biodegradable bioplastic mulches are designed to break down into carbon dioxide, water, and various “natural substances.” Environmentally friendly plastics are often more expensive, raising the question of whether businesses will be able to afford them.

Other potential sources of plastics in agricultural soil include polymer sealants on fertilizers, pesticides, and industrial compost. Unsold food is often sent to the composting facility still in plastic packaging, and with plastic stickers on every apple and kiwi fruit.

The Australian Standard for composts tacitly recognises that microplastics are likely to be present in these products by having acceptable levels of “visible contamination.” Anyone who has bought compost or garden loam from a landscaping supplier may have noticed pieces of plastic in the mix.

There might be other pathways we don’t know about yet.

What happens once microplastics are in the soil?

Here we stand at the edge of the cavernous knowledge gap because we don’t know the effect of microplastics in our soil. The overarching question, physically and biologically, is where do microplastics go?

How plastics fragment and degrade in the soil depends on the type of plastic and soil conditions. Compostable, PET, and various degradable plastics will behave differently, having different effects on soil physics and biology.

Fragments could move through soil cracks and pores. Larger soil fauna might disperse fragments vertically and laterally, while agricultural practices such as tillage could push plastics deeper into the soil. Some fragmented plastics can absorb agrochemicals.

Soil microbes can break down some plastics, but what are the byproducts and what are their effects? Newer, biodegradable bioplastics theoretically have limited impact as they break down into inert substances. But how long do they take to break down in different soil and climatic conditions, and what proportion in the soil are non-degradable PET plastics?

Both the main form of carbon in soil and polythene (the most common type of plastic) are carbon-based polymers. Could the two integrate? If they did, would this prevent plastics from moving deeper into the soil, but would it also stop them breaking down?

Could plastics be a hidden source of soil carbon storage?

Bioaccumulation is when something builds up in a food chain.

Research into microplastic accumulation on land is sparse at best. A 2017 study in Mexico found microplastics in chicken gizzards. In the study area, waste management is poor and most plastics were ingested directly from the soil surface as opposed to having bioaccumulated.

Nematodes can take up polystyrene beads suggesting some potential for bioaccumulation, however earthworms have reduced growth rate and increased mortality when they ingest microbeads.

Larger microplastics are unlikely to cross plant cell membranes, but it’s possible that plants can absorb the chemicals formed when plastic degrades. Plants have natural mechanisms to keep contaminants out of their fruiting bodies – pieces of plastic in apples or berries is highly unlikely – but root vegetables and leafy greens are a different story.

Metals can accumulate in leafy greens and the skin of root vegetables – could plastics or their byproducts do the same?

This is before we even get to nanoplastics, which are 1-100 nanometres wide. Can plant roots can absorb nanoplastics, and can they pass through an animal’s gut membrane?

The first step is to quantify how much plastic is currently in the soil, where it is, and how much more to expect. This is more difficult in land than water, as it’s easier to filter plastics out the ocean than to separate them from soil samples. The smaller the plastics are, the harder they’ll be to track and identify – which is why research must start now.

Research needs to address the different types of plastics, including beads and other synthetic fibres. Each is likely to act differently in the soil and terrestrial ecosystems.

Understanding how these plastics react will inform the next obvious questions: at what quantity do they become hazardous to soil, plant and animal life, and how can we mitigate this impact?

Plastics in soil represent artifacts of human civilization. Soils are full of human artifacts; if this was not the case then there would be no field archaeology. However, the effects of microplastic may persist far longer than our own civilization. We must fill in our knowledge gaps swiftly.