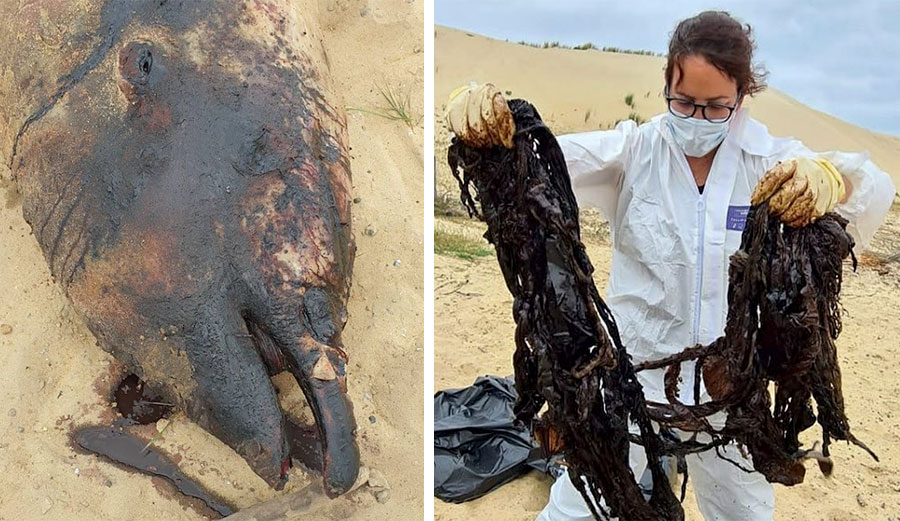 The whale was found on the beach, and it was absolutely stuffed with trash. Photos: Itsas Arima/Instagram

Plastic isn’t something that should be inside us. Unless it’s part of an artificial heart or a new hip, it’s best to keep it on the dry side of the human body. Same, of course, goes for animals. Unlike us, however, animals sometimes think that a floating bit of plastic is edible. You’ve seen the pictures. Those birds. Those whales. Well, we can add another one to the list: a female Curvier’s beaked whale washed ashore in early May with a little over 35 pounds of plastic garbage smashed into its guts.

The whale, which washed ashore in Messanges in southwest France, was found by beachgoers on May 8. It was partially decomposed already, but after the environmental conservation groups Pelagis Observatory and Itsas Arima did an autopsy, they concluded — very reasonably, I might add — that it died because it had 35-fucking-pounds of plastic in its belly.

After so many pieces of plastic get ingested, the creature’s stomach is full and it dies of starvation with a full belly. “This waste lines the walls of the stomach and intestines,” Willy Dabin, Pelagis Observatory’s stranding network coordinator, explained via TVA Nouvelles, “which can cause blockages and prevent nutrients from entering the blood.”

Included in the whales stomach were shopping bags, pasta packages, and wrappers for chips and crackers, among other things. According to reports, the whale might have been eating plastic because it had a parasitic condition that ruined its kidneys, which likely impacted its ability to hunt. Curvier’s beaked whales are generally very effective hunters, diving thousands of feet to find squid and deep-sea fish to eat. The kidney condition may have affected its ability to dive, so researchers have theorized that it was eating what it could find on the surface. Which, since we’re the wonderfully effective polluters that we are, was plastic. Lots of plastic.

“We found that the animal was thin and had a significant parasitic disease that weakened it, possibly preventing it from continuing to eat normally,” wrote Itsas Arima, who photographed the whale, on Instagram. “She therefore fell back on what was around her and she came across … our waste.”

This is far from the first time this has happened, as you know. Back in 2018, a sperm whale washed up in Indonesia with 13 pounds of plastic inside it. In 2017, another Curvier’s beaked whale was euthanized when scientists found it too was full of plastic. A Pilot whale was found in Thailand with 80 plastic bags in its stomach. I could go on, but I don’t want to because it’s gross and sad that we, as humans, have created a way of living that requires other creatures to die for our conveniences.