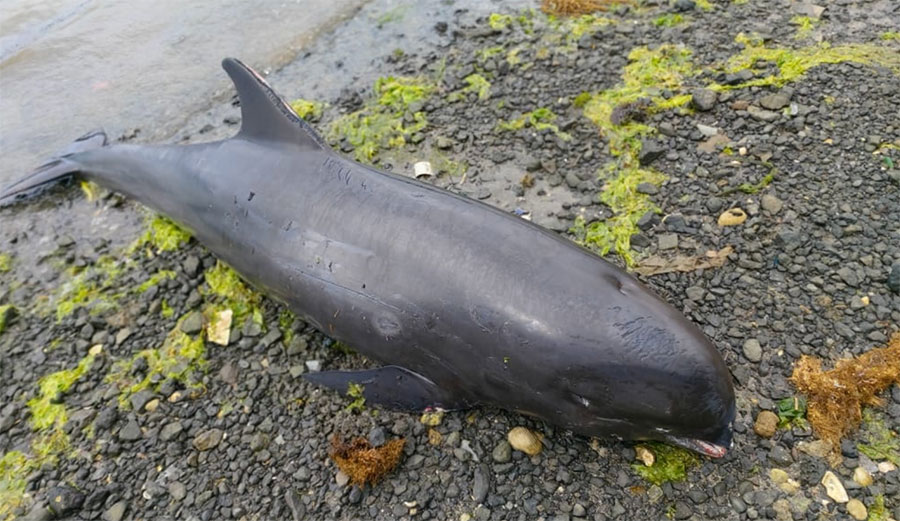 Seventeen dolphins washed up on the shores of Mauritius after a Japanese tanker ran aground. Now, environmental groups are crying foul. Photo: Greenpeace Africa/Twitter

On July 25, something catastrophic happened in Mauritius. A vessel loaded with 200 tons of diesel and nearly 4,000 tons of oil ran aground on a coral reef. It floundered there, with cracks rapidly appearing in its hull. Oil and fuel spilled out at alarming rates into the surrounding area, and now, just over a month later, dead dolphins are washing up on beaches. Seventeen dead dolphins washed up on the shores of Mauritius Wednesday, and seven more were found the following day.

The Japanese tanker at the center of the catastrophe, MV Wakashio,  is owned by the Nagashiki Shipping Company. Cleanup efforts were launched in the hours following the accident but were quickly hampered by foul weather. A few days later, Prime Minister Pravind Kumar Jugnauth declared a state of environmental emergency and asked for help from the international community. Then, after it broke into two pieces, the decision was made to scuttle the ship on Monday, upsetting many in the community – and environmentalists around the world.

“Out of all available options, the Mauritian government is choosing the worst one,” Happy Khambule, Greenpeace Africa Senior Climate and Energy campaign manager, said in a statement released after officials announced their intentions. “Sinking this vessel would risk biodiversity and contaminate the ocean with large quantities of heavy metal toxins, threatening other areas as well, notably the French island of La Réunion. Mauritians had nothing to gain from the MV Wakashio crossing their waters and are now asked to pay the price of this disaster. More pollution further risks their tourist-based economy and fish-based food security.”

The death of at least 17 dolphins is a great loss for Mauritius’s #Biodiversity, and necessitates a thorough investigation.

If the recent oil spill is indeed the cause of this tragedy, then those responsible for it MUST be held accountable! #BreakFreeFromFossilFuels
📸 :Shav pic.twitter.com/RCLsZUcgpM

Although environmental groups have been quick to point the finger, it’s not yet clear exactly how the dolphins died. “The dead dolphins had several wounds and blood around their jaws, no trace of oil, however,” Jasvin Sok Appadu, who works for the fisheries ministry, told Reuters. “The ones that survived, around ten, seemed very fatigued and could barely swim.”

Appadu went on to say that the dead dolphins were taken to the Albion Fisheries Research Centre for autopsy. The results are expected in about a week.

While it’s clear that the ecological impact from the spill is devastating, its full impact isn’t yet known. Mauritius’ economy relies heavily on tourism and it could potentially be impacted for decades. According to the Mauritius Marine Conservation Society, nearly 10 miles of coastline have been affected by the spill. If it continues the way it’s heading now, it could impact the Blue Bay Marine park, which is home to a variety of species of fish and coral that are endemic to the island.

Eco-Sud, a local Mauritian environmental outfit, demanded that the results of the dolphins’ autopsy be released to the public. Greenpeace Africa tweeted, “If the recent oil spill is indeed the cause of this tragedy, then those responsible for it MUST be held accountable!”

At least one group, however, says it’s not probable that the dolphins died as a result of the spill. “Likely they followed a school of fish into the lagoon, got confused, could not find their way out to sea again and tried to head out directly over the coral reef instead of finding the pass,” Owen Griffiths, of the Mauritius Marine Conservation Society, told AFP. “In their panic and stress, they collided with corals, became exhausted, and died. At this stage, we have no idea of the cause of death. An autopsy with stomach content analysis and lung examination – to look for oil traces – needs to be done.”