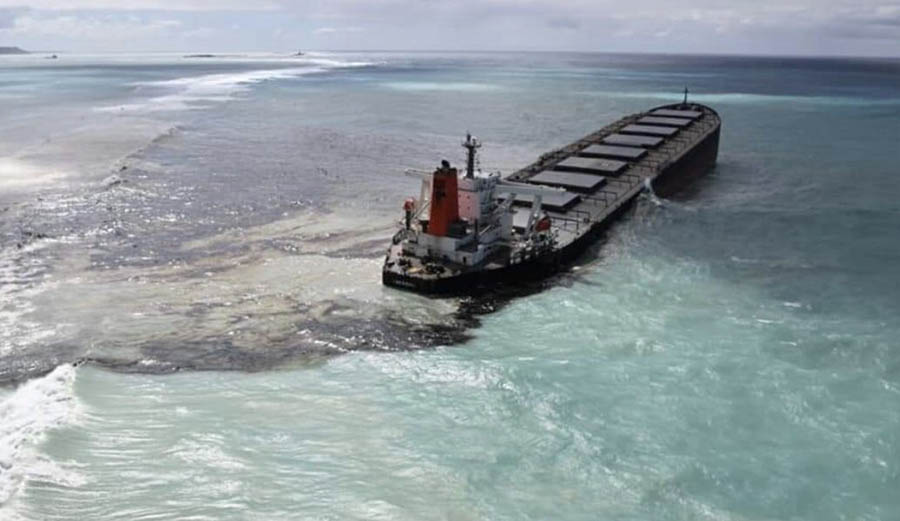 The MV Wakashio ran aground on Jul 25. Photo: Twitter/Hugo Clemente

On July 25, a ship loaded with 200 tons of diesel and 3,800 tons of oil ran aground on a coral reef in Mauritius. Since then, several large cracks have appeared in the hull. Already a disaster of unmitigated proportions for the ocean life that calls the reef home, if the MV Wakashio does break apart, the ecological impact would be devastating. As of this writing, more than 1,000 tons of diesel and oil have already escaped.

“The current oil spill on the reef near Pointe d’Esny on the southeast coast of the Mauritian island is likely one of the most terrible ecological crises ever seen on the small island country,” Greenpeace Africa wrote in a statement.

Mauritius, known for its waves, beaches, and its world-class reefs, relies heavily on tourism. The island, once dependent on exporting sugar, built up a strong tourism industry over the years. The accident occurred in a particularly sensitive area: Pointe d’Esny is a well-known sanctuary for rare wildlife, as well as wetlands that have been designated as a site of international importance.

The tanker, called the MV Wakashio and owned by the Nagashiki Shipping Company, ran aground on the southeast coast of the island. Soon after, oil was observed spilling from the vessel. Cleanup efforts were launched, but have since stalled due to high winds and large waves. On Thursday, Prime Minister Pravind Kumar Jugnauth declared a state of environmental emergency and asked for help from the international community.

Greenpeace weighed in, confirming that the spill is likely to be one of the worst ecological disasters Mauritius has ever seen.

“Thousands of species around the pristine lagoons of Blue Bay, Pointe d’Esny and Mahebourg are at risk of drowning in a sea of pollution, with dire consequences for Mauritius’s economy, food security, and health,” Greenpeace said in a statement.

According to reports, the Nagashiki Shipping Company said it had tried to free the tanker, but efforts were hampered by persistent bad weather. Now, many in the local community have taken matters into their own hands. Despite a government request to let the officials handle the cleanup, volunteers have been filling sacks with straw to create oil barriers, as well as beginning to deal with the oil that’s already washed up on the beaches. “People have realized that they need to take things into their hands,” environmental activist Ashok Subron told AFP news agency on Sunday. “We are here to protect our fauna and flora.”

It’s a daunting task, though, and there is help on the way. Emmanuel Macron, the president of France, announced that the country would be sending equipment from the nearby island of Réunion, along with crews to deal with the spill. Japan has also sent a team.

Japanese officials are taking full responsibility and have vowed to do everything in their power to “resolve the issue.” A few days after the accident, the executive vice-president of Mitsui OSK Lines, Akihiko Ono, apologized profusely for “the great trouble we have caused”.