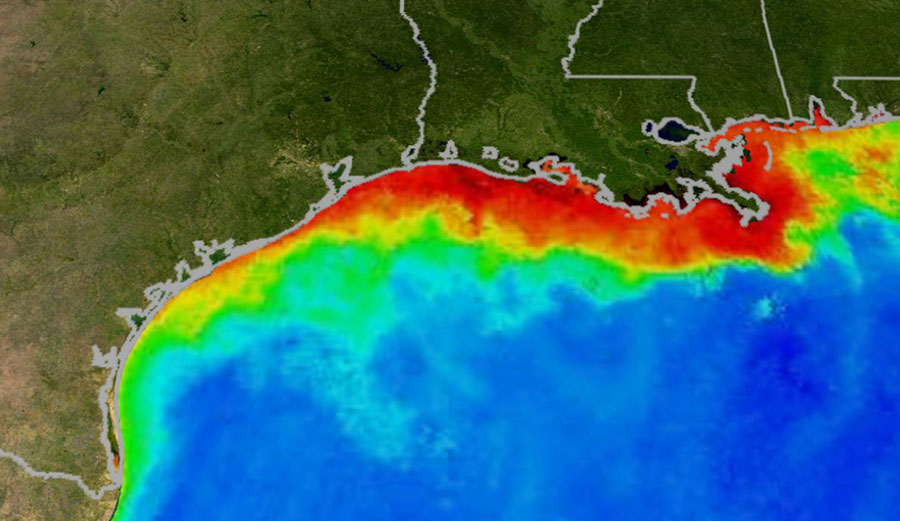 See that dead zone? Yeah, it’s not going anywhere no matter what we do. Image: NASA

Unless you’ve got your head in a soundproof box, you’ve heard about the massive dead zone in the Gulf of Mexico. It’s nothing new, this dead zone—it’s been happening for decades, in fact—but in recent years, it’s gotten much larger. In August of 2017, it was found to be the “largest ever measured.” And now, according to a new study published in Science, it appears it’s basically too late to do much about it.

Caused mainly by the vast amounts of agricultural runoff from the industries that serve our lust for more of everything, the dead zone is a 9,000 square mile area of ocean that is so starved of oxygen there’s almost nothing living there.

“It’s long been known that the way the meat industry feeds the insatiable American public’s lust for meat–poultry, beef, and pork, mostly–is pretty fucking toxic to the environment,” we wrote a few months back. “According to Mighty, the environmental group that looked into what, exactly, is causing the increase in the size of the dead zone this year, the average American ate 211 pounds of meat in 2015. The CDC put the average American male at 195 pounds. Just a bunch of gluttons eating more than our weight in meat every year.”

So here’s how it happens, in very simplified terms. The fertilizer-laden runoff from vast cattle ranches inevitably makes its way into the waterways and, eventually, into the Gulf. Once there, the fertilizer continues to do what it does: fertilize. Only now, it fertilizes algal blooms, which occur naturally. When algae are given a massive dose of nitrogen and phosphorus, however, it flourishes.

From there, the phytoplankton have a feeding frenzy and their populations explode. Then, since there are just god damn many of them, huge portions of them die off, sink to the bottom, and the even tinier creatures that break them down use up way more dissolved oxygen than they should. And there you have a dead zone.

The study found that in order to shrink that dead zone to about half the size by 2050, we’d have to drop the nitrogen levels in the sea to zero. Which, of course, is next to impossible.

“These coastal dead zones are considered by many to be one of the primary threats to marine species,” lead author Dr Kimberly Van Meter, a postdoctoral fellow at the University of Waterloo (UoW), told IFLScience. “The Gulf of Mexico’s summer dead zone forms right in the heart of one of North America’s most important fisheries, and continuing damage to fish habitat could severely threaten the regional economy.”

So here’s the bit that’s depressing (if all that other stuff wasn’t depressing enough already). For a while, researchers threw out vague estimates that if we were able to drop the nitrogen levels by 60 percent, that dead zone would shrink enough to bring a bit of blush back into the Gulf’s whitened cheeks. This new study, however, took four possible future scenarios, ran the numbers, and found that we’re basically screwed. In the first scenario, they kept things going as they’re going now. Then, they dropped the nitrogen levels by 25, 75, and 100 percent.

What they found was that even if we got rid of all of the nitrogen we’re dumping into the Gulf, there’s enough “legacy nitrogen” soaked into everything in the Mississippi River to keep things trucking along horribly for decades.

“Can anything be done?” asked IFL Science’s, Robin Andrews. “The study’s senior author, UoW associate professor Nandita Basu, maintained that we must maintain current conservation measures, but ‘we may need to consider more large-scale changes in our crop production system,’ including picking crops that ‘can dramatically reduce the amount of nitrogen running off of fields.'”