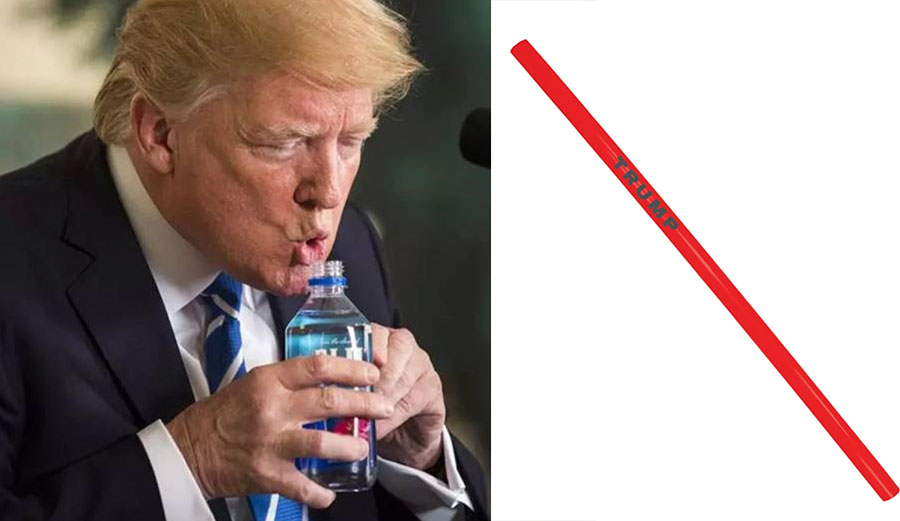 The need for straws is real. Photos: Screenshot/DonaldJTrump.com

Have you ever used one of those ridiculous paper straws and thought to yourself, “man, there just ain’t anything that beats a good ol’ plastic straw when it comes to sucking”? Those paper ones get all moist and fold over on themselves, causing much unnecessary suffering. How many chests have caved in under the pressure of sucking through a thick paper straw? Thousands? Millions? Getting that flimsy, weak, liberal straw through the hole in the lid of a 40-ounce Slurpee is enough to make any red-blooded American’s blood boil. Well, don’t worry, because Donald Trump has your back. The Trump campaign is selling 10 packs of Trump-branded plastic straws for $15. Actually, that is a real thing that is happening. “Liberal paper straws don’t work,” the description reads. “STAND WITH PRESIDENT TRUMP and buy your pack of recyclable straws today.”

“I do think we have bigger problems than plastic straws,” Trump recently said to reporters. “You have a little straw, but what about the plates, the wrappers, and everything else that are much bigger and they’re made of the same material?”

“I do think we have bigger problems than plastic straws,” Pres. Trump says. “You have a little straw. But what about the plates, the wrappers and everything else that are much bigger, and they’re made of the same material?” https://t.co/NkJuIoh4fP pic.twitter.com/La6uTTpmeH

And he’s right. If I throw a barrel of used motor oil into the sea, it stands to reason that since it’s already there, I might as well throw an old refrigerator full of Freon in, as well. I mean, we’re already on track to have more plastic in the ocean than fish, so there’s no reason to even try. If my car is heading towards a wall at 100 miles per hour, there’s no point in hitting the brakes because I’m already heading towards the wall, right?

Now you may be fooled by the fact that Trump’s fundraising website says these straws are reusable and recyclable. “Oooh,” you might think. “Reusable AND recyclable!” But here’s the thing about that. All plastic straws are already reusable and recyclable. It’s just that no one reuses or recycles them because human beings are, for the most part, kind of shitty when it comes to cleaning our collective house. Our kitchens might be sparkling, but our world isn’t. Here’s an interesting thought, though: I’ll bet the fact that Trump’s straws have his name on them will actually cause them to be reused at a higher rate than most other plastic straws.

Science Advances published a study back in 2018 that found that 91 percent of plastic isn’t recycled. The rest of it ends up in landfills, blowing around like dirty little tumbleweeds, or floating in our vast, great ocean. Some of it, as you’ve seen, ends up stuck in a turtle’s nose or as a meal for some sad (dead) bird or some sad (dead) whale.

According to IFLScience, “Trump 2020 campaign manager Brad Parscale has revealed in a tweet that over $200,000 has already been raised through the sale of these straws.” That works out to about 13,333 packs of ten, which, according to math, is 133,333 red plastic Trump-branded straws. But if that outrages you, just remember: liberal paper straws don’t work.