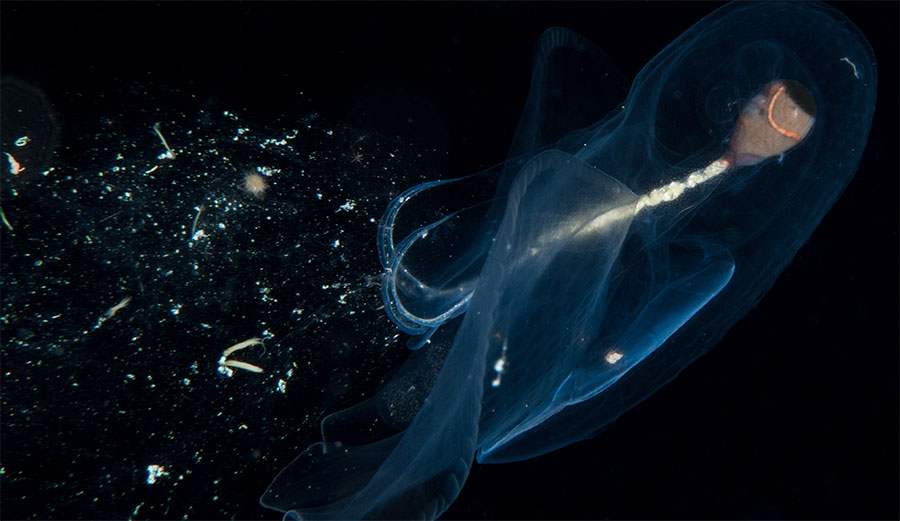 All animals must eat to survive. If you’ve heard the term “grazer” before, it may bring to mind familiar farm animals, such as cows or sheep munching on pastureland. But the ocean has its own suite of grazers, with very different — even bizarre — body forms and feeding techniques. Instead of teeth, one group of these invertebrates uses sheets of mucus to consume huge quantities of tiny plant-like particles. In our new paper, my colleagues and I suggest a new categorization for this overlooked group: “mucous-mesh grazers,” in recognition of their unusual feeding strategy.

Unlike the mucus in our noses, which appears amorphous and blobby, the mucous sheets of these ocean grazers can be structured into ornate meshes and nets. These mucous sheets can function like a filter to ensnare food as small as bacteria. The grazers themselves are mammoth in comparison: up to 10,000 times bigger than their food. If people ate food that small, you’d be picking salt and sugar grains off your dinner plate.

Marine biologists like me used to think mucous grazing was a “catch-all” feeding strategy – the idea was these guys would just chow down on whatever their mucous sheet caught. But recent technological advances are helping us understand that mucous grazers can be picky eaters. And what they consume — or don’t — influences ocean food webs. 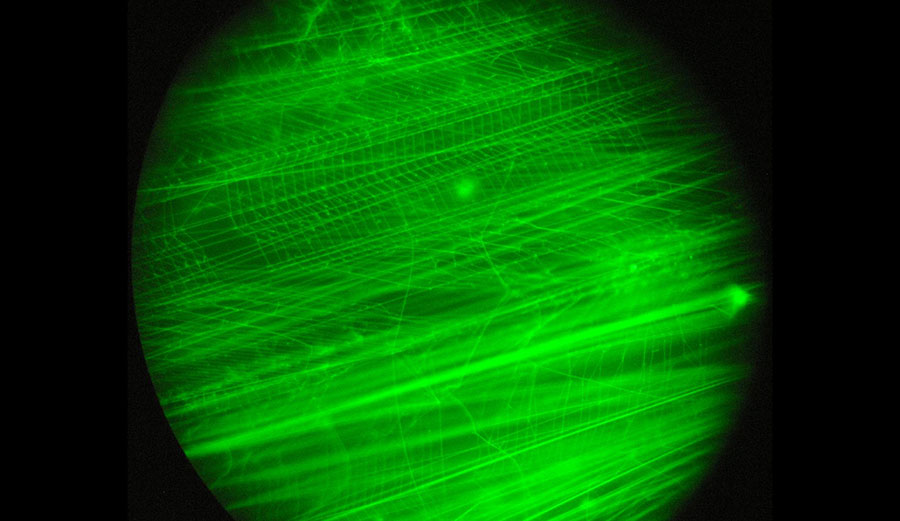 Ornate filtering meshes (amplified 1,000 times and stained bright green in this image) capture particles much smaller than the grazers themselves. Image:
Kelly Sutherland/CC BY

How does mucous-mesh grazing work?

Mucous-mesh grazers include salps, pyrosomes, doliolids, pteropods and appendicularians. They are typically centimeters in length, roughly spanning the size of your fingernail to the size of your hand. Some form colonies comprised of many individuals in long chains that can be much longer. These creatures are large and watery compared to their hard-bodied planktonic counterparts. If you stepped on one, it would squish, not crunch. A mostly water body enables them to grow large quickly.

Mucous-mesh grazers are free floating and suited to the open ocean. They live far from shore, where food is scarce and often small. The tiny holes and fibers of their mucous meshes enable them to capture microscopic particles, which they subsequently swallow, sometimes along with the mucus.

Unlike spiders that spin their feeding webs, these grazers have a special organ, called an endostyle, that secretes their mucous mesh. Depending on the grazer, the mucous mesh can be located either inside or outside the body. One group, for example, secretes a mucous bubble big enough for the animal to live inside like a house. Another group, nicknamed sea butterflies, secrete mucous webs that attach to their wing-shaped feet. These mucous webs range in size from an inch to over 6 feet.

Historically, scientists assumed mucous-mesh grazers ate anything that passed through the mucous sieve — similar to a strainer in the drain of the kitchen sink catching everything of a certain size that flows in. Recent research by my lab and others challenges this assumption and shows that their feeding may be highly selective. The mucus might capture certain food particles perfectly, while completely rejecting other particles on the basis of their size, shape or surface properties.

For example, when presented with a mixture of rod-shaped and spherical food particles – differently shaped but otherwise similar in size – one species of mucous-mesh grazer preferentially swallows the spherical particles.

That’s a bit like choosing tater tots over French fries: They’re both made of potatoes and are roughly the same size but they have different shapes. The mucous grazers’ food “choice” is passive, though, having to do with how differently shaped prey orient in seawater and intercept the mesh.

Grazers can “pick” prey, but prey may also be able to have some say in the matter — either passively or actively. For instance, some bacteria have Teflon-like surfaces and don’t stick to the mucous meshes, so they’re almost never consumed. How all of the different prey properties might influence grazing has been underappreciated until recently.

Understudied but not unimportant

Oceanographers are interested in how material moves through the ocean and how the process could be mediated by organisms. Mucous mesh grazers might be an overlooked piece of the cycle.

The fact that they don’t capture all prey equally has important consequences for how carbon moves through the ocean. After mucous grazers feed, they package undigested food particles into mucus-bound fecal pellets or other castoff material. Repackaging prey particles with sticky mucus concentrates small prey into larger aggregates, which makes them sink more quickly. This ultimately moves organic material to the ocean depths, potentially storing it for years or even centuries. At depth, this material is unavailable to the majority of marine organisms that live near the surface.

Until the past decade or two, scientists didn’t have technological tools to watch what was happening with mucous-mesh grazers in their native habitat at the appropriate tiny scales. Because these organisms are quite fragile, now researchers in my lab and others use scuba diving or robots to directly observe them underwater. These close, careful observations using high-speed cameras and underwater microscopes or doing feeding studies in the natural environment have shown us how they select certain particles and reject others.

Further advances will combine underwater methods with recent developments in imaging and genetic sequencing to shed light on the role of mucous-mesh feeders in shaping the structure of the ocean’s microbial community. Underwater imaging allows for undisturbed observations of these fragile creatures. Researchers can watch how individual particles behave on the mesh and whether they are ultimately captured. Genetic sequencing used in the context of feeding studies helps scientists identify and distinguish the groups of tiny microbes that are often invisible to the naked eye.

Knowing which particles are consumed and which aren’t tells us about the impact that the mucous grazers have on ocean food webs.

Picky eating by mucous-mesh grazers may have profound implications for biogeochemical cycles, particularly in light of shifting ocean conditions. Environmental factors like ocean temperature, availability of nutrients and the type and amount of prey present influence when and where mucous grazers appear, how long they stick around and their impact on ocean food webs.

A more tropical species of mucous-grazing pyrosomes (Pyrosoma atlanticum) provides a case study. Typical in warmer waters as far north as Southern California, they confounded scientists and fishermen alike when they appeared off the Oregon coast in 2014.

No one knows why the pyrosomes appeared, but ocean temperatures warmed around the same time. Like other mucous-mesh grazers, the fine pyrosome filter allows them to graze on the smaller particles that are associated with warmer, less nutrient-rich surface water – prey too small for most other animals to catch. Along with other researchers along the West Coast, my lab is actively working to understand why the pyrosomes appeared, how they might affect the marine ecosystem, and if they will persist.

Grazers in the ocean are inherently more challenging to study than those than on land; we continue to learn more about who they are through what they eat.

This article was co-authored by Keats Conley, a research biologist for the Shoshone-Bannock Tribes’ Department of Fish and Wildlife.