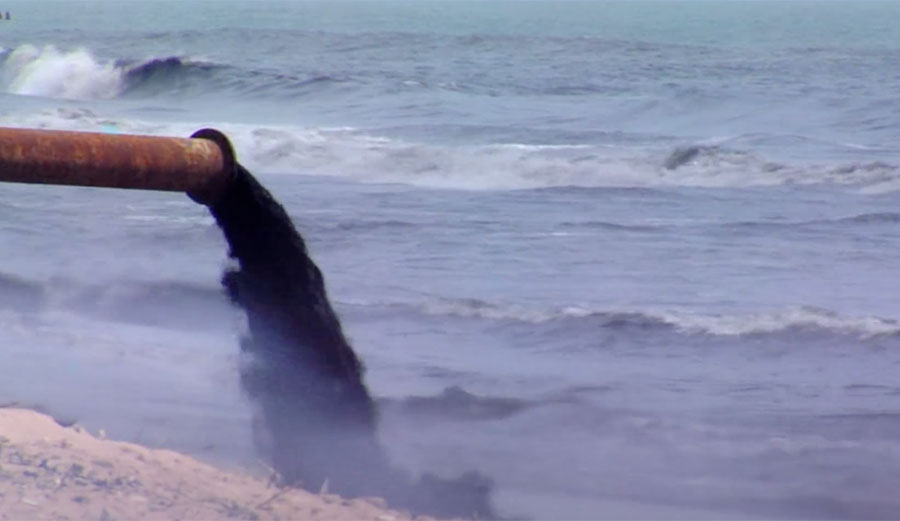 Each year, we dump vast amounts of sewage into the sea. Photo: YouTube/Screenshot

There are a lot of humans on this planet. Too many, some might say — around eight billion, which is certainly a lot of people. Every single one of those people poops on a regular basis, and all that poop generally enters some kind of sewage system. A new study recently documented exactly how much human excrement impacts coast areas and in the process, it shows where and how much is actually entering our oceans.

Unless you’ve got an outhouse on top of a hole in the ground, you’re probably shitting in a toilet. Toilets, as you likely know if you’ve ever thought about toilets, lead to sewage systems, either septic fields or a larger system used by many. Hopefully, those sewage systems involve some kind of treatment, because hoo boy, the ocean sure does eat up a lot of our poop. Out of sight out of mind doesn’t really apply here, either.

The study, which was reported in PLOS ONE, a science journal that aims to “accelerate the pace of scientific advancement and demonstrate its value,” holds some pretty staggering shit-related numbers. By calculating amounts of fecal pathogens and nitrogen flushed into the ocean at over 130,000 sites around the globe, they found that nearly half of the nitrogen and pathogens is coming from 25 places.

Researchers found that human sewage introduces 6.2 million tons of nitrogen into coastal ecosystems around the globe every year. Some 63 percent of that nitrogen comes from treated sewage, five percent from septic systems, and (this is gross) 32 percent from “untreated input” – a fancy way of saying “turds that go directly into the ocean.”

“The sheer scale of how much wastewater is impacting coastal ecosystems worldwide is staggering,” the study authors said in a statement. “But because we map wastewater inputs to the ocean across more than 130,000 watersheds, our results identify target priority areas to help marine conservation groups and public health officials to work together and reduce the impacts of wastewater on coastal waters across the planet.” 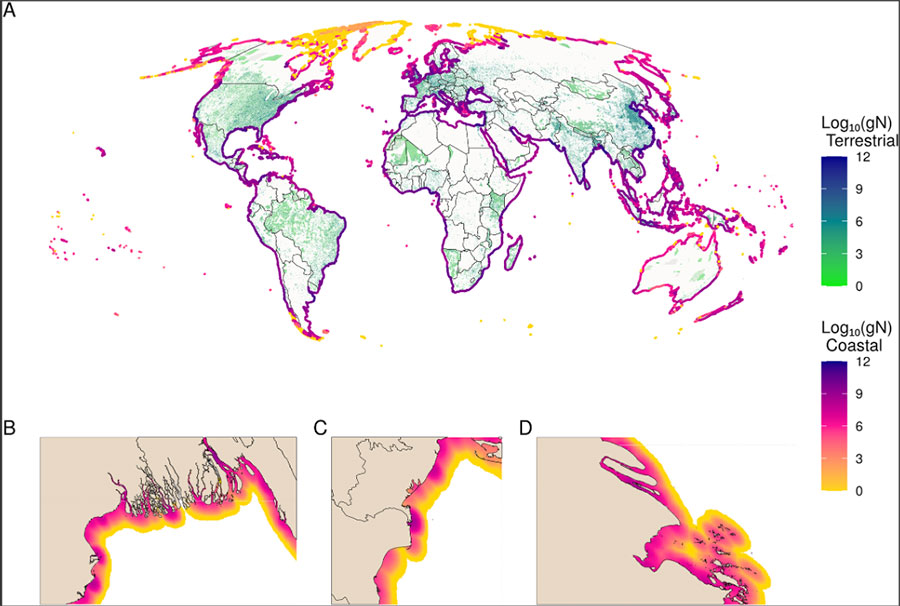 A) Global map of the terrestrial sources (green to blue) and coastal diffusion of inputs (yellow to purple) of total wastewater N, measured in log10(gN) in both. Coastal plumes have been buffered to line segments to exaggerate patterns to be visible at the global scale. Insets show zoomed-in views of the B) Ganges, C) Danube, and D) Chang Jiang (Yangtze) Rivers, showing wastewater plumes at high resolution. Graph: PLOS ONE

According to IFLScience, 25 watersheds make up almost 50 percent of all wastewater nitrogen. They’re mostly in India, Korea, and China. The latter is where the Yangtze River flows — a famously disgusting stretch of water — and contributes 11 percent of the global total. Raw sewage is a major issue in a handful of countries, like China, India, and a few in Africa.

The research was conducted by scientists at the University of California, Santa Barbara. They were attempting to measure the impacts our wastewater has on not only public health, but marine life, as well. Nitrogen is a necessary component for a healthy ecosystem, but it’s a delicate balance — too much can create enormous blooms of algae, which leads to a vast network of inter-related problems, like dead zones. Add sewage to the amount of farming runoff in the mix, and you’ve got a concoction flowing into the ocean that is particularly bad.

“The researchers mapped out where areas with coral reefs and seagrass were also meeting hotspots of nitrogen output,” wrote Tom Hale for IFLScience. “They found parts of China, Kenya, Haiti, India, and Yemen are likely to have coral impacted by the outlaw of sewage, while seagrass exposure hotspots were identified in Ghana, Kuwait, India, Nigeria, and China. This, however, might just be the tip of the iceberg and is likely to be having a knock-on effect throughout the wider ecosystem.” 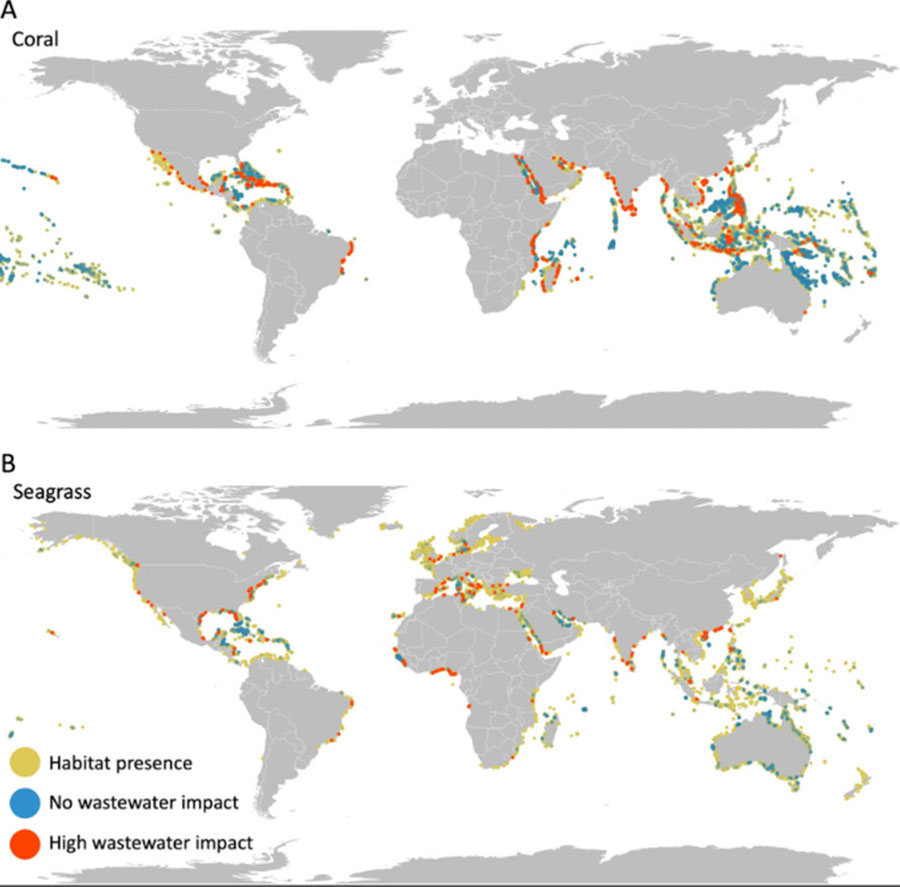 Maps show where A) coral reefs and B) seagrass beds are heavily impacted (raster cells in top 2.5% of exposure; red dots), not impacted (no exposure to wastewater N; dark blue dots), or impacted but not in the top 2.5% (yellow dots). Raster cells are represented as points which visually over-represents the habitat; red is overlaid on top which makes it visually dominant; blue points are transparent and overlaid on green/yellow points such that higher densities of un-impacted areas are brighter blue. Graph: PLOS ONE

Excessive wastewater flowing into our coastal ecosystems is bad, in no uncertain terms. It’s bad for animals, marine life, public health, and economies that rely on our natural world. The study concluded that “wastewater inputs are likely to interact with the plethora of anthropogenic stressors to coastal ecosystems, leading to declining fisheries, habitat loss and degradation, and human health impacts.”

With any luck, the researchers hope that their findings could help form international collaborations to help create better strategies to deal with the colossal amount of literal shit we dump into our oceans.