Opinion: Dana Rohrabacher Is the Biggest Kook in Congress and Here’s Why He Needs to Be Replaced 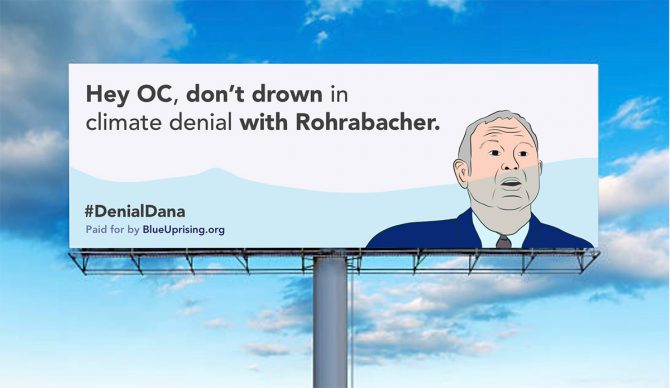 When Rohrabacher isn’t dabbling in light treason with his crew at the Kremlin, he has been a disastrous congressman for the environment. He has styled himself as the “surfers’ congressman,” posing for photos during the Vans U.S Open, surfboards on the wall of his congressional office, staging photo ops of himself “surfing,” and introducing legislation to honor Kelly Slater. It couldn’t be further from the truth, though. At the same time he’s sought to bolster his “surf cred,” he has also voted for some of the most harmful environmental legislation and has repeatedly and proudly denied climate change:

Constituents may be interested to learn of the growing scientific consensus that global warming is not manmade if it is in fact even occurring.

In fact, Rohrabacher has a 0% rating from the League of Conservation Voters as a result of his environmental voting record. It’s surprising the surf community in Orange County has allowed Rohrabacher to represent them year after year. And how has the surf industry allowed this guy to play in their own backyard this whole time? The good news is that Dana has run out of time. We, the surfing community and ocean enthusiasts will find and support candidates who will fight for the ocean.

To be clear, this isn’t a Democrat or Republican “thing,” this is a “we don’t want the State of California to be underwater in ten years” thing. There are a number of candidates who are running in the California primary who would, at the very least, be an improvement upon Dana Rohrabacher. Here are some of them:

-Paul Martin, Republican, prioritizes green jobs and the health and safety of our oceans;

-Michael Kotick, Democrat, whose opening statement on his website acknowledges that climate change is real;

Brandon Reiser, a Libertarian, who really loves the word freedom;

Laura Oatman, Democrat, her website includes a solid 10-point plan that has more weight than anything Dana has introduced in Congress. Excluding honoring Kelly Slater’s win at Bells, of course;

Harley Rouda, Democrat, previously Republican, could do well by pulling votes from both parties.

With the help and encouragement of some really good people, we have started a CrowdPAC campaign to put up a billboard in Orange County. We need your help to make it a reality. Please visit our page here. If you would like to get more involved, please email blueuprisingpac@gmail.com – all trolling and violent threats will be met with screenshots.

Together, we can help protect the ocean we love. After all, I’ve never met a surfer who doesn’t love the ocean. Except, apparently, Dana Rohrabacher.