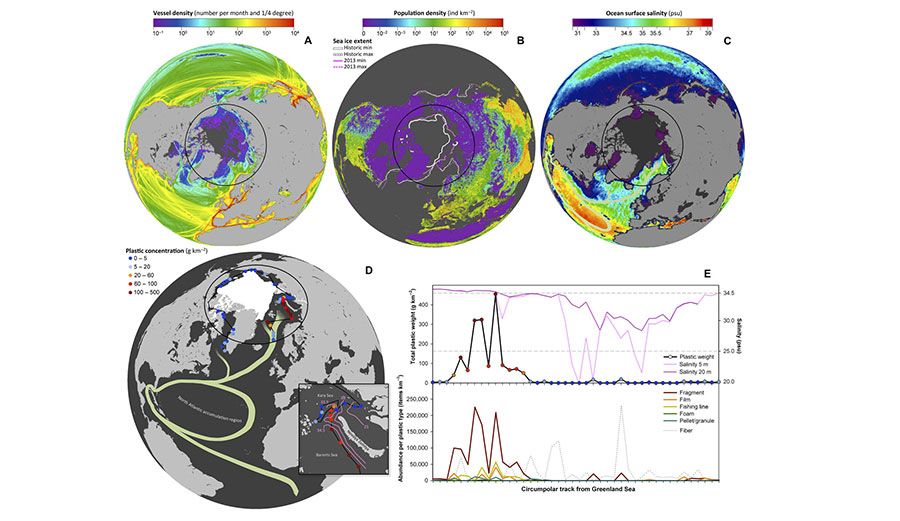 Environmental conditions and concentrations of floating plastic debris in the Arctic Ocean. Get a closer look at ScienceAdvances.com

You’ve surely heard of the Great Pacific Garbage Patch. There are, in fact, more than one garbage patch, but for some reason, the singular one mentioned above seems to take all the notoriety. According to Nat Geo, “the Great Pacific Garbage Patch is not the only marine trash vortex—it’s just the biggest. The Atlantic and Indian Oceans both have trash vortexes. Even shipping routes in smaller bodies of water, such as the North Sea, are developing garbage patches.” And good news! Two more colossal ones have been discovered in the Arctic Ocean. Somewhere around 300 billion pieces of plastic are floating around at the end of the Earth. High five, humans!

In short, garbage patches are enormous floating consolidations of trash, mainly comprised of plastic. Gyres–a whole system of spinning ocean currents created by wind patterns and the Earth’s rotation–suck in floating debris, where it eventually ends up in the middle of one of many giant gyres, creating a bunch of garbage so big it can take weeks to sail through. They’re not actual islands, as many seem to think, but miles of garbage floating on the surface or just beneath.

The new study recently published in Science Advances found that our trash has made its way all the way to the Arctic. Most of it comes from (prepare yourself for science) thermohaline circulation, which is a global current that depends on the varying salinity and temperature of different parts of the ocean. It’s the thing that pumps warm water into the Arctic, and plastic from the North Atlantic is being pumped right along with it.

Normally, it’s the subtropical gyres that suck in the most garbage. Because of their proximity to major pollution sources, they’re the obvious choice for researchers studying garbage patches. “The possibility of plastic accumulation at polar latitudes has been overlooked because of the lack of nearby pollution sources,” the abstract of the study reads. “The Arctic Ocean was extensively sampled for floating plastic debris from the Tara Oceans circumpolar expedition. Although plastic debris was scarce or absent in most of the Arctic waters, it reached high concentrations (hundreds of thousands of pieces per square kilometer) in the northernmost and easternmost areas of the Greenland and Barents seas.”

The trash ending up in two regions is accumulating at an alarming rate. “These ‘dead end’ patches are quickly growing in size to the point where they are starting to rival the Great Pacific Garbage Patch,” wrote IFL.com.

The lead author of the study, a biology professor at the University of Cádiz, was more than a little shocked.“The growing level of human activity in an increasingly warm and ice-free Arctic, with wider open areas available for the spread of microplastics, suggests that high loads of marine plastic pollution may become prevalent in the Arctic in the future,” the study said. “The uniqueness of the Arctic ecosystem makes the potential ecological implications of exposure to plastic debris of special concern.”