On September 14, the eyes of the surfing world were focused on Lower Trestles and the 2021 Rip Curl WSL Finals. WSL commentator Peter Mel dropped a nugget of wisdom when he described the overhead waves and incredible conditions as a “beautiful swell that traveled thousands of miles and focused on (the) cobblestone reef.”

The waves that produced a riveting day of professional surfing at Lowers were a product of distant storms meeting coastal ecosystems protected by the 2,000-acre San Onofre State Beach, which includes surf breaks from Trails in the south to Cottons on the north.

There is no more intensely surfed zone in all of Southern California, which is why San Onofre State Beach is one of the most popular state parks in the Golden State.

In her UC San Diego dissertation, Briana Marie Iatarola described the area as, “Two cobble deltas, as well as substrate and sediment transport (that), play critical roles in the formation of Trestles’ reef and waves. The large cobbles produce two fan-shaped deltas on the seafloor. The first, which is fed by the Cristianitos and San Mateo Creeks. The other is located south of Lowers at Church and sustained by the San Onofre Creek. The creeks’ circulation and transport of sediment coupled with cobble substrate help produce Trestles’ sandbars, which affect the shape of waves.”

“Its estuary, wetlands, creeks, and uplands shelter an astonishing 11 federally listed endangered species. It is the only coastal watershed south of Ventura which is un-dammed. This natural hydrology is essential for many plants and animals that depend on periodic flooding and dry spells. At San Onofre State Beach, visitors can access this unique, pristine, and nearby wilderness, and experience what our world used to be like.”

The affection for Trestles and the fabled waves, trails, and campgrounds of San Onofre by surfers and the general public alike are why a proposal to build a highway through the middle of San Onofre State Beach was met by such incredulity and outrage. The political power of the Transportation Corridor Agency to push its “highway from hell” by lobbying agencies, cities, and top government officials in Southern California, Sacramento, and Washington D.C. meant that coastal protectors had to up their game to protect a globally recognized surf spot, a popular state park, and what big wave surfer Greg Long calls “an ecological treasure.”

Given the TCA’s strong political connections that almost allowed the toll road agency to plow a highway through a San Onofre State Beach, a coalition of environmentalists, surfers, and indigenous peoples joined together to “Save Trestles.” In the process, they advanced how surfers and coastal defenders go about protecting our shorelines and surf spots.

Just as the everyday cutting-edge and innovative surfing at Lowers is advancing the technical side of the sport, the innovative and cutting-edge tools and techniques used in the effort to stop the TCA Toll Road furthered the coastal environmental movement.  Here are a few ways in which the Save Trestles campaign and movement helped to transform efforts to forever protect surf spots and the coastal ecosystems that house them.

When I first heard of the TCA’s proposal to build a large highway project that was slated to plow through the existing San Mateo Campground in the San Mateo Creek Watershed just upstream of Upper Trestles, I was outraged.

“How can anyone build a highway within a state park,” I remember asking during the Sierra Club and Surfrider Foundation-organized lobbying trip to Sacramento in 2005. “Isn’t the park already supposed to be protected?” 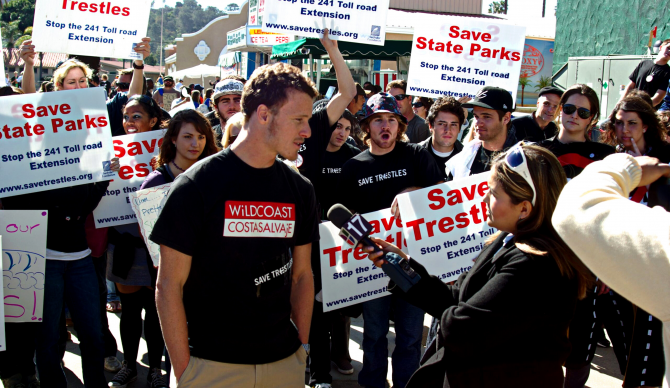 Ben McCue at the 2008 Coastal Commission Hearing on the proposed TCA toll road at the Del Mar Fairgrounds. Photo: WILDCOAST

It turns out there were no laws on the books in California that stopped anyone from proposing to build road projects within California’s state parks.

“One of the key lessons from the Save Trestles movement and Save San Onofre Coalition,” says WILDCOAST Associate Director Zach Plopper, “is that we need to embed every park or protected area with multiple layers of legal safeguards, stewardship, and enforcement programs — so it can’t be ruined by a development project, poaching and pollution and is actually protected.”

No surf spot is 100 percent protected forever. We can’t become complacent. We need to continually evolve our tools and strategies to conserve our waves and breaks.

Long-held stereotypes about cheap surfers by municipal and tourism authorities pretty much everywhere have hurt our ability to use economic arguments to advance surf protection initiatives. That is until Surfrider CEO Chad Nelsen and other surf economists developed the field of surfonomics to evaluate the economic impact surf spots have on local economies.

“For decades surfers have been ignored as an important part of the coastal tourism economy, but it turns out they are actually significant contributors to local businesses in surf towns,” Nelsen says.

“Surfers are avid – many surf over 100 days a year – and they travel to adjacent towns for waves, year round and at all times of day, and spend money in local communities when they visit,” he says. “In many ways, they are perfect visitors. Surfonomics measured this at Trestles and found that surfers spend between $8-13 million dollars a year in San Clemente when visiting Trestles. When making the argument that the toll road should be denied, the Coastal Commission staff referenced my research to demonstrate the importance of the recreational resources found at Trestles and San Onofre State Beach.”

Since then, the global appreciation of the economic power of surfing has really advanced efforts to identify the value of saving our natural wave-riding venues. And forums like the Global Wave Conference have done a lot to promote the global movement to use a variety of tools including economics to protect surf spots around the world.

Until recently, very little attention was paid to the value of Southern California’s indigenous peoples, who were unjustly forced into inland settlements and reservations away from their ancestral and coastal homelands and villages.

This was especially the case for Panhe, a close to 10,000-year old Acjachemen village that was located within San Mateo Creek throughout what is now San Onofre State Beach. Acjachemen leaders such as Rebecca Robles made a convincing case to California Coastal Commissioners back in 2008 that the cultural and religious significance of Panhe, or San Mateo Creek, merited permanent protection.

The advocacy of the Acjachemen over the potential destruction of Panhe played a key role in helping convince state agencies, such as the California Coastal Commission, to deny a Coastal Permit to the TCA for its toll road project.

Since then, organizations like the Sacred Land Institute, Native Like Water, as well as the Southern California Tribal Chairman’s Association among many others, have done an outstanding job of communicating the value of cultural landscapes for conservation and the importance of connecting Native American communities, especially youth, to their ancestral lands and waters in Southern California. But there is much more to do to recognize the value of cultural coastal landscapes that are key ecosystems as well as important areas for indigenous peoples worldwide.

The Save Trestles movement and the ongoing Save San Onofre Coalition brought people from all walks of life together to preserve surf spots, watersheds, campgrounds, and a beloved state park. It illustrates that preserving our coast is a team effort. Saving waves requires constant vigilance and the combined energy of surfers and coastal conservationists, indigenous peoples, as well as the beach-going public. If we are to continue to fight for the places we love and give us meaning and joy, we need to broaden our coalition to protect the coast so we can preserve our surf spots, protected areas, cultural landscapes, and natural ecosystems for generations to come. 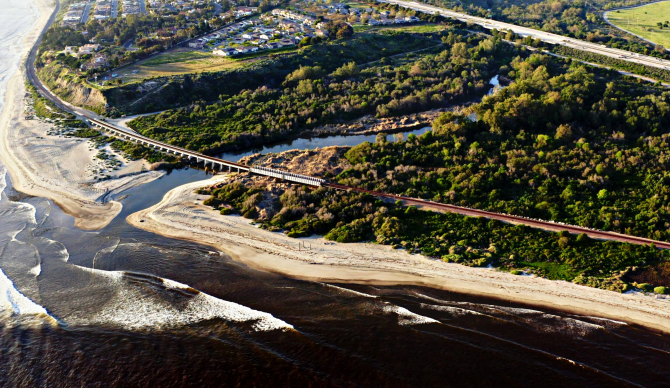