Seaweed Could Be Indonesia’s Answer to the Global Plastic Crisis 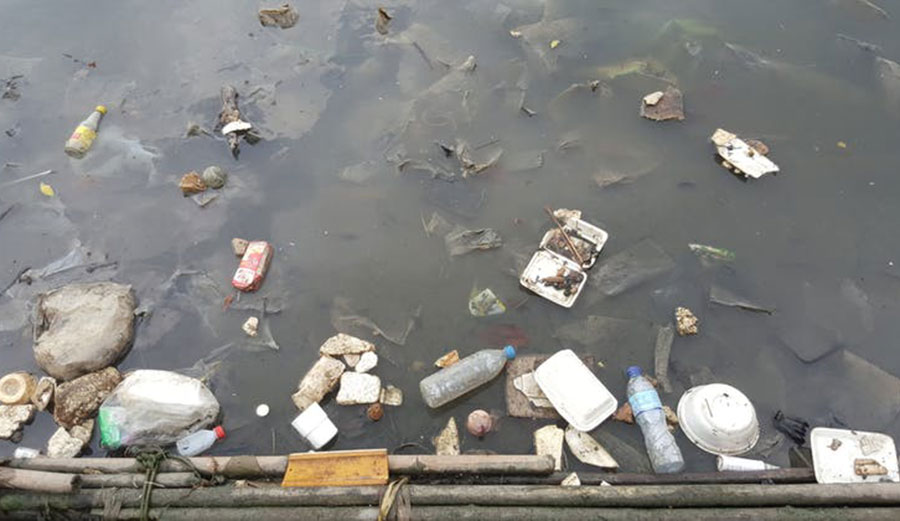 The most dangerous element from discarded plastic waste is microplastics. Image: Shutterstock

The impacts of global plastic use have reached an alarming level. Based on the latest data, 9 billion tonnes of plastics have been produced since the 1950s, creating 7 billion tonnes of waste. Plastic waste not only damages the environment and threaten animal life but also harms human populations.

One of the most dangerous elements of plastic waste is tiny pieces of debris known as microplastics. These are damaging the environment, mostly the ocean, and in much greater amounts than originally thought. A recent study shows the number of microplastics has reached up to 51 trillion particles, or 236,000 metric tonnes, globally. These tiny particles can end up in people’s stomachs via drinking water or eating seafood, which could present health risks.

Various attempts to minimise plastic use have been introduced. One involves developing plastic materials, known as biodegradable plastics or bioplastics, that decompose naturally in the environment.

My research aims to show how seaweed can be the best material for use in bioplastics. This article argues that Indonesia can play a key role in developing seaweed-based plastics.

A number of countries have recently introduced policies to encourage the use of degradable plastics and recycling to minimise plastic use. The UK will ban all sales of single-use plastic, including plastic straws and cotton swabs, next year. Cities in the US have declared war on plastic straws. Seattle has launched a campaign dubbed “Strawless in Seattle”, while New York is considering a ban on plastic straws. In 2017, Kenya introduced the toughest plastic bag ban with a penalty of four years in jail or a $40,000 fine.

However, it is impossible to stop plastic use. So far, plastic is the most convenient and versatile material for various purposes and brings huge benefits to our lives. People’s continued dependency on plastic has encouraged the rise in the production of plastic now and in the future.

The plastic industry is huge and is expected to continue expanding. In 2014, the plastic packaging industry was valued at US$270 billion and this is projected to increase to $375 billion by 2030.

One way to control plastic use is through recycling. However, things are not as easy as expected. Plastic products come in a hundred or more varieties. These variations are so huge that it is difficult to sort them out for the recycling process. Therefore, only about 9% of plastic waste is recycled. Around 12% is incinerated. The rest ends up mostly in landfills or the ocean.

Bioplastics offer an alternative. The bioplastics are commonly made from plants or bacteria and are more environmentally friendly as well as sustainable.

The global bioplastic production capacity will increase to 6.1 million tonnes in 2021 from 4.2 million tonnes in 2016 due to people’s increasing awareness of eco-friendly products. People have started using bioplastics in their daily lives, with uses ranging from shopping bags and disposable housewares to electronics. Big brands such as Coca-Cola, Heinz, Unilever, Nestle, Danone and Nike have started using bioplastics for their packaging.

Why seaweed for bioplastics?

The materials commonly used to produce bioplastics are corn, sugarcane, vegetable oil and starch. However, using these ingredients for plastics has raised some concerns.

First, the production of bioplastics requires a huge investment in the land, fertilisers and chemicals. Second, the use of these plants for plastics will trigger a competition between plants for food versus plants for plastics, which will lead to food price hikes and food crisis.

Seaweed is so far the best candidate for bioplastics as it manages to answer both of the challenges above. First, it is cheap. Unlike other terrestrial plants, seaweed can grow without fertilisers. It does not take up huge space on land as it grows offshore. By using seaweed for bioplastics, the production of agricultural commodities for food will remain intact, so no food price hikes nor food crisis will occur.

Indonesia is the largest archipelago in the world and two-thirds of its territory is water. Indonesia is one of the world’s largest seaweed producers, accounting for more than a third of global seaweed production. Indonesia’s seaweed exports were valued at around US$200 million in 2014, with production reportedly increasing at about 30% per year.

Indonesia is also the world’s largest producer of red seaweed, whose carbohydrate element is the key ingredient for bioplastics. A recent report suggests that Indonesia is a highly suitable place for red seaweed farming due to its climate, nutrients and geographical conditions.

Indonesia is also one step ahead of other countries in developing seaweed-based plastics. Indonesian start-up Indonesia Evoware has invented cups and food containers made from farmed seaweeds and sold them commercially.

With its potential, Indonesia should play a key role in developing ecofriendly-plastics from seaweed to avert a global plastic crisis. When water bottles or shopping bags from seaweed-based plastics become waste, we will have nothing to worry about as the waste will just go back to where it came from.