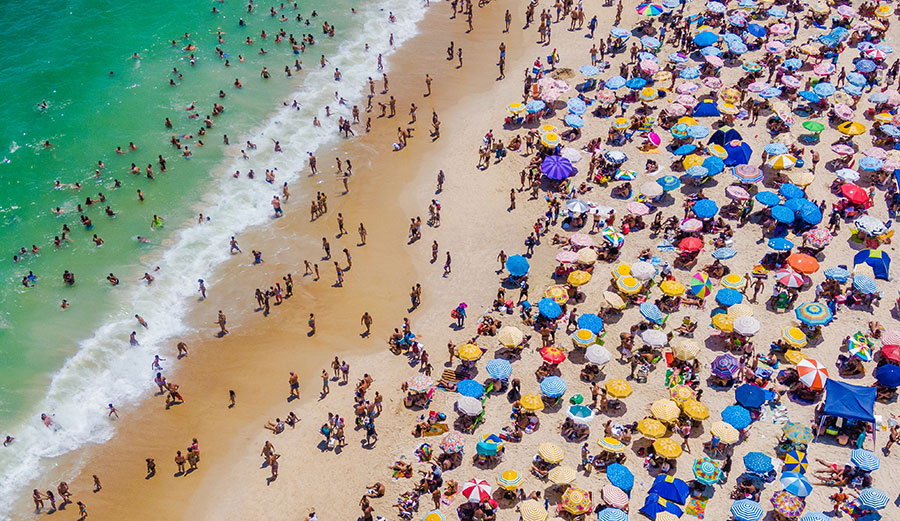 Up to half of the world’s sandy beaches are at risk of disappearing by the end of this century if no action is taken to limit greenhouse gas emissions. That’s according to a new study, published in Nature Climate Change. Even assuming a better outcome for action on climate change, where global emissions peak around 2040, well over one-third (37 percent) of the world’s beaches would be lost by 2100.

Researchers had previously analysed satellite images showing shoreline change from 1984 to 2016. They found that a quarter of sandy beaches worldwide had already eroded at a rate of more than 0.5m per year, shedding over 28,000 square kilometres of land to the sea.

The rate at which sea levels are rising is accelerating by about 0.1mm per year each year. But sea-level rise won’t be even across the globe. The term “sea level” can be misleading – the sea surface is not flat. Much like the atmosphere, it has high and low-pressure areas that create mounds and troughs. Some of these are created by major currents, so changes that will take place as the oceans warm will change the topography of the sea surface. Some areas will receive less than the predicted average sea level rise, but many will see more.

More than 60 percent of sandy beaches in Gambia and Guinea-Bissau may be lost to erosion by rising seas, while Australia is expected to lose nearly 12,000 km of sandy coastline. For small island states such as Kiribati, the Marshall Islands, and Tuvalu, losing 300m of land – as predicted for some – would be catastrophic. 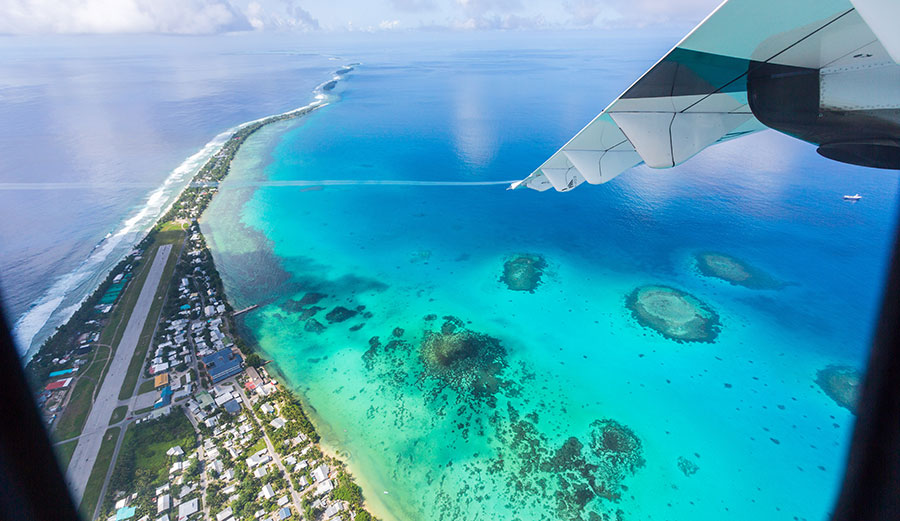 An aerial view of Funafuti atoll, Tuvalu, shows the airstrip of Vaiaku international airport. There is little space for the coast to retreat as sea levels rise. Photo:Maloff/Shutterstock

Sandy beaches occupy more than one-third of the global coastline and of all the different types of beaches, sandy beaches are the most heavily used by people. Many coastal areas have been built on, for industry, housing, and tourist resorts.

These “softer” parts of the shoreline have always been at the mercy of ocean storms and the tides. But the predicted sea-level rise on top of these daily inundations pushes the boundary between coast and sea inland, a process known as coastal retreat.

The build-up of people and concrete at the landward fringe of sandy beaches has created an abrupt barrier to coastal retreat, preventing beaches from moving inland as sea levels rise. Instead, sandy stretches of coastline are at risk of being eroded and washed away entirely.

Warming seas also promise more intense and frequent storms, which are capable of moving entire beaches overnight. Porthleven Beach in Cornwall, UK lost all of its sand during a storm in January 2015, to be returned by the tide a few days later.

A million tons of sand on Porthleven Beach completely disappeared overnight & reappeared the next day! pic.twitter.com/GBs7y1dtxv

Soft sandy beaches are continuously moved by waves and currents – depleting them in certain areas and depositing them in others. This transport of sand is normal, but the combined force of higher sea levels and stronger storms could spell extinction for many beaches.

All of this is very worrying for the millions of people who call these regions home. The world’s sandy coastlines tend to be densely populated, and are becoming more so over time. In other research, it was found that sea-level rise by 0.8m could erase 17,000 square km of land and force up to 5.3 million people to migrate, with an associated cost of USD$300-1,000 billion globally. In Africa alone, up to 40,000 people per year could be forced to migrate due to land loss by coastal erosion if no adaptive measures are in place by 2100.

But it isn’t just climate change. Humans are actively accelerating coastal erosion by removing sand from beaches in enormous quantities and at much faster rates than it can be naturally renewed. Gravel and sand is extracted from rivers and on beaches for use in construction – and at a faster rate than fossil fuel extraction in some areas.

Coastal ecosystems that bind and trap sediment, like mangrove swamps, are also being destroyed. The world lost almost 10,000 square kilometres of these habitats between 1996 and 2016. Meanwhile, sediment supply to the coast is also affected by building dams and irrigation systems upstream. 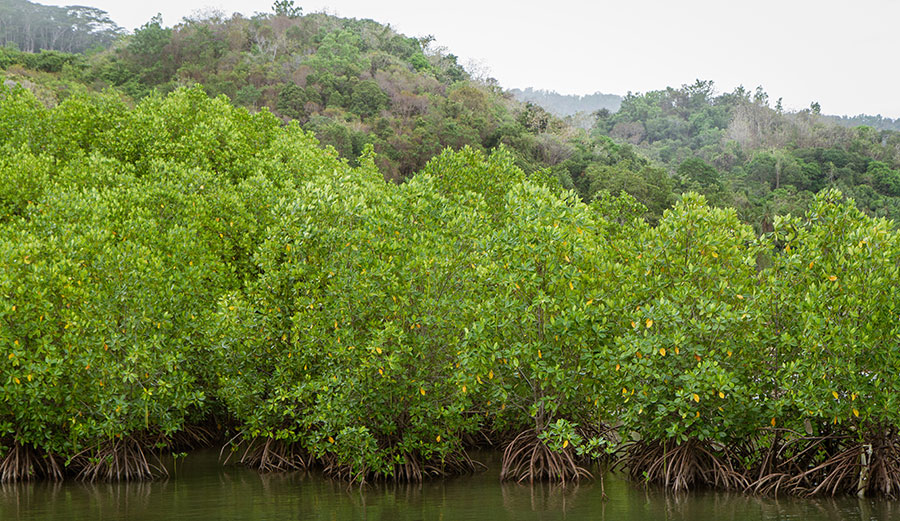 Mangroves are effective buffers against storms and help trap more sand around the coast. Photo: Ibenk_88/Shutterstock

Sea level rise is inevitable, but how bad it will be is still not certain. Replenishing the most endangered beaches by pumping sand onto them – a process called “coastal nourishment” – could cost USD$65–220 billion in total, but that’s still less than one-fifth of the economic cost of taking no action at all on sea-level rise. It could reduce land loss by up to 14 percent, lower the number of people that might be forced to migrate by up to 68 percent, and shrink the cost of forced migration by up to 85 percent by 2100.

Even “moderate emission mitigation policy”, as the new study calls it, in which global emissions peak around 2040, could prevent 40 percent of the landward retreat of shorelines by 2100. On average, this would save more than 40m width of sandy beach around the world, from an average loss of around 250m.

Coastal nourishment can have its own ecological problems, so it would have to be done with careful attention to the local environment. But much of what needs to be done to save the world’s sandy beaches lies within our grasp already – if we can just reduce the rate at which we’re consuming sand and burning fossil fuels. By doing that – and expanding and protecting coastal habitats – the terrible predictions from this new research might never come to pass.