This started as a mountain range. Photo: Bas Meelker/Shutterstock.com

There’s more to beach sand than meets the eye. It has stories to tell about the land and an epic journey to the sea. That’s because mountains end their lives as sand on beaches.

Over time, mountains erode. The mud, sand, gravel, cobbles, and boulders they shed are washed into streams, which come together to form rivers. As they flow down to the sea, all this sediment is ground up and worn down in nature’s version of a rock tumbler.

Big rocks break down into smaller pieces, so most of what reaches the sea is mud. These silt and clay particles are too small to perceive with the naked eye. But you can see individual grains of sand, which are just bigger bits of rock.

Next time you’re at the beach, pick up a handful of sand and look closely at it. Are all the grains the same color, or a rainbow assortment? Are they jagged and angular, or smooth and round? 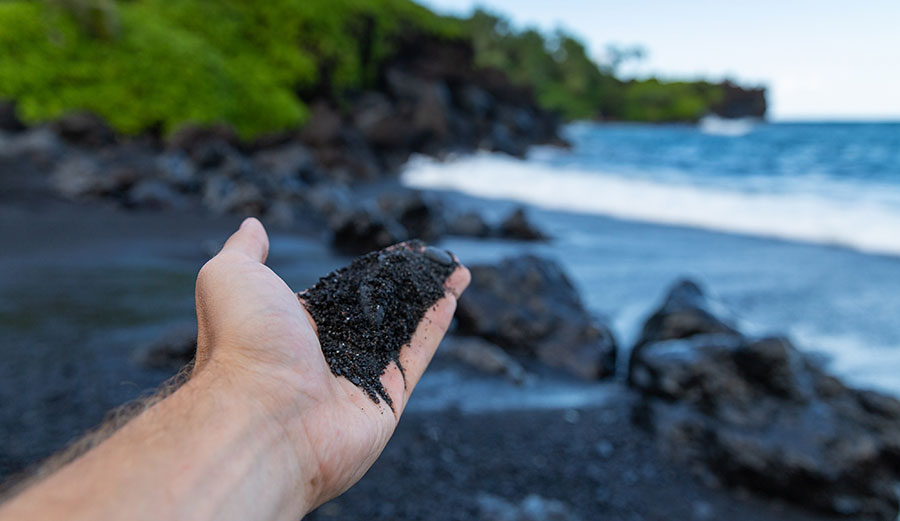 Some beaches in Hawaii have black sand because the islands were formed by erupting volcanoes. Many volcanic minerals are dark colored. Photo: dronepicr/Wikipedia, CC BY

Different colors of sand come from different minerals, like khaki feldspar, smoky white quartz, green olivine or black basalt. The mix of colors in beach sand tells you what kinds of rocks produced it.

The shape of sand grains also provides clues about where they come from. Angular grains of the same type of sand have not traveled as far as smooth round grains, which have been more worn down. And weak rocks break down to mud faster than hard rocks, so sand tends to be made of the harder types that break down slowly.

But the beach is just a temporary stop for sand. Big waves pull it offshore, and smaller waves push it along the coast. So keeping a beach nourished with sand is essential for keeping it sandy.

Yet today many beaches are starving. Many dams trap the sand that flows down rivers, piling it up in reservoirs. All in all, human activity has cut off about half the sand that would otherwise end up on the world’s beaches.

But humans haven’t turned the waves off, so as beach sand washes away and isn’t replenished, the shoreline erodes. That means that many beaches around the world are shrinking, slowly but surely. So next time you dig your toes into beach sand think about the epic journey it took to arrive beneath your feet. Take a moment to think about where the sand came from and where it’s going.