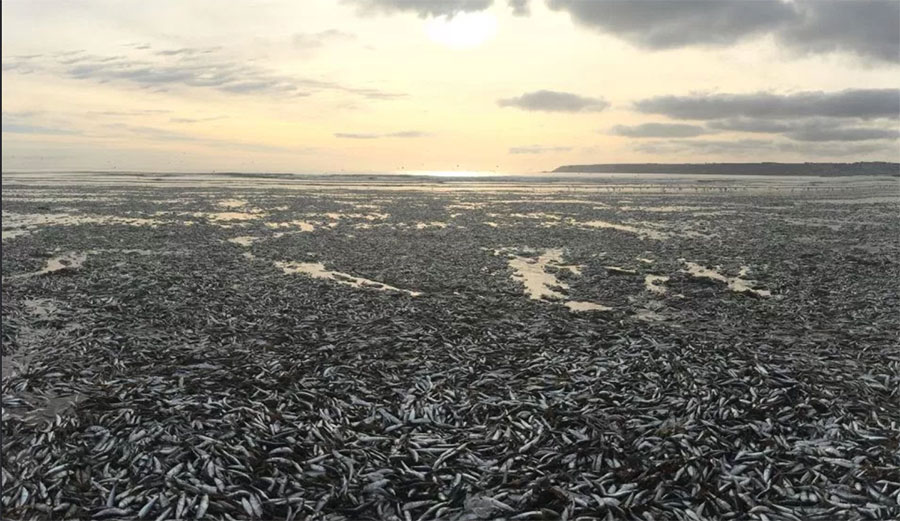 Tens of thousands of dead fish washed up on a Cornish Beach. Photo:The Sun/Caters News Agency

It must have been an incredibly morbid sight. Walkers on Marazion beach in Cornwall, at the south-western tip of mainland Britain, recently discovered tens of thousands of dead fish had been washed ashore overnight. One eyewitness told the Plymouth Herald the fish stretched “as far as the eye could see”.

People speculated that pollution or natural predators such as dolphins or porpoises chasing the fish ashore may be to blame. But a much simpler explanation soon unfolded when the Cornish Sardine Management Association said that one of its vessels had been fishing close inshore and had had to release one of its catches for safety reasons.

Exactly what happened in this case remains unclear. But why would a ship ever need to dump fish for safety reasons? After all, catching lots of fish is surely the entire point. In any case, a European Union discard ban was first implemented in 2015 in order to stop this sort of thing.

The ban applies to the discarding of commercially valuable species for which an EU catch quota is set. The process is being phased in gradually and first on the list are “pelagic” fish like mackerel or herring that live in the midwater to close to the surface of the sea. These species of fish were chosen because they are seen as the least complicated fisheries that generally have few bycatch species associated with them.

Other more complex fisheries like those for cod, Norway lobsters (scampi) and Dover sole, that have a greater mix of species in their catches, will gradually come under the rules of the discard ban. By 2019, all quota species will be encompassed by the legislation.

TV chef Hugh Fearnley-Whittingstall’s Fish Fight campaign successfully made it seem abhorrent to throw back perfectly edible fish simply because a vessel had no quota. Yet the Marazion stranding highlights the potential tension between well-intended legislation designed to reduce waste, and the issue of vessel safety and perhaps unintended consequences of management measures.

Most of the fish in question were reported to be sardines. At present, sardines are not a quota species and hence are exempt from the EU’s discards ban, which means there is probably no further cause for concern from a legal perspective.

But thousands of dead fish on a popular beach is a horrible sight, whatever the law says. It makes fishermen appear wasteful and creates a negative impression of the entire fishing industry.

So what went wrong?

Although fishing is a highly sophisticated business these days, it remains imperfect. Mistakes can happen, no matter how experienced the skipper may be.

In sardine fishing, the net is typically laid around the shoal and tightened like a bag. The net is then retrieved slowly to the side of the vessel and the fish are brought aboard. In the case of the Marazion deaths, the vessels involved will be relatively small and have limited storage space so keeping everything balanced is crucial.

If by sheer bad luck the net encircled a shoal of fish that was larger than the skipper realized, the boat is immediately put in a dangerous situation. A large catch on one side of the vessel will create an imbalance that will make it much more prone to capsizing when in rough seas. A fisherman died off the coast of nearby Devon in 2012 when his heavily-laden trawler capsized in similar circumstances.

Therefore if the catch is physically too large to retrieve, the vessel would have no choice other than to release the bottom of the net so that the catch falls away.

So surely the fish will swim off? Sadly not in this case. Many midwater species like sardines and mackerel are quite delicate and vulnerable to damage due to the high number of fish caught in the net. In this instance, the sardines would most likely have been incapacitated as a result of being hauled to the side of the vessel, and when released from the net they would have been washed ashore with the action of tide and waves.

No one wants this to happen – not least the fishermen themselves. Improving the welfare of fish within nets is an emerging area of research, as reducing stress during capture improves the quality (and price) of the fish that end up in restaurants.

Sonar that can better estimate the size of schools of fish, along with other improvements to fishing technology, will gradually eliminate the sort of mistakes that led to the reported fish kill. Fishermen have every incentive to adopt these technologies as slipping fish is not only undesirable, but also a dangerous, even life-threatening situation.