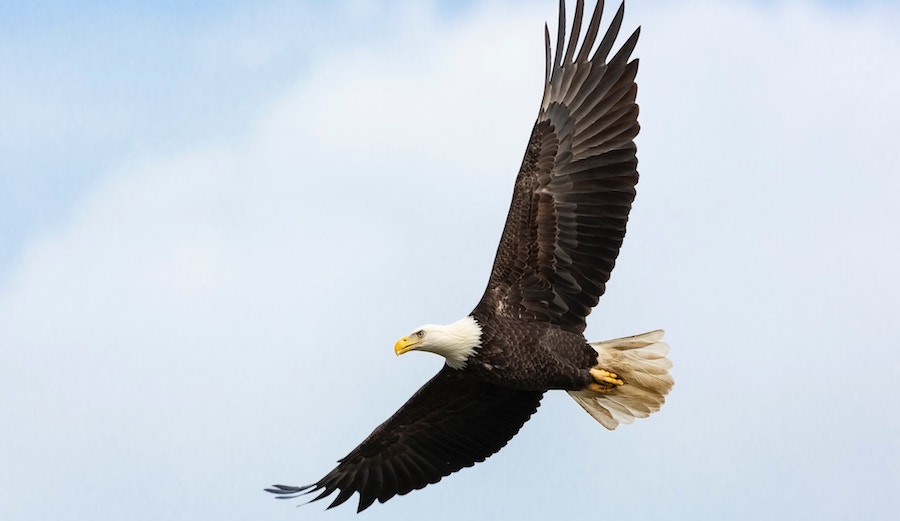 The Endangered Species Act was instrumental in the protection of the bald eagle and countless other species. Photo: Mathew Schwartz

In its latest effort to loosen longstanding U.S. environmental protections, on Monday the Trump Administration moved to significantly weaken the landmark Endangered Species Act. The 1973 law is credited with saving a number of severely endangered species, including the bald eagle. But, according to the New York Times, the new changes would make it easier to remove certain species from the endangered list. “The revised rules appear very likely to clear the way for new mining, oil and gas drilling, and development in areas where protected species live,” the Times explains.

From buying television ads to blast Interior Secretary Ryan Zinke and his decision to shrink at least three national monuments to filing suit against the Trump Administration, Patagonia and its founder, Yvon Chouinard, and CEO, Rose Marcario, haven’t shied away from taking the president and his environmental record to task. But in her latest scathing rebuke of the Trump Administration’s policies, Marcario took to LinkedIn to explain why efforts to weaken the Endangered Species Act are problematic. You can read the entire letter, below:

A recent report from the United Nations confirms that as many as one million animal and plant species are in danger of disappearing forever in the coming decades, largely because of climate change and our reckless use of land and resources. Humans are cutting down too many trees, catching too many fish, spraying too many chemicals, and extracting and burning too many fossil fuels. Yet, instead of leading our country and the world to fight the extinction crisis and the climate crisis, the Trump administration is waging war on the Endangered Species Act, which was signed into law by a Republican president and has helped protect more than 1,650 species since 1973.

This threat must serve as a galvanizing call-to-action for all of us. Protecting critters, creatures and their habitats is going to take immediate, decisive action from governments, companies, and communities across the world. As Patagonia’s founder Yvon Chouinard likes to say, “If you want to save the polar bear, you have to start by permanently protecting the Arctic.”

Our extinction crisis should worry all of us, especially those of us that like to spend time outside. It affects all of us — no matter where we live or who we vote for. Biodiversity may sound like an abstract concept, but it has massive consequences. For example, if bees and other pollinators die off, we can forget about the world’s food supply. There would be deadly famines and devastating economic consequences. But even if the worst-case scenarios don’t happen, contributing to the extinction of countless species is just wrong — a total abdication of our responsibilities as stewards of our natural heritage — especially when there is a law on the books that we know works.

We need to get serious about the extinction crisis: The United States government must commit to protect 30 percent of our land and water by 2030, on the way to protecting 50 percent by 2050, and urge other nations to do the same. This is a big goal, but that’s exactly what we need to meet a big crisis. As of today, just 15 percent of the world’s land and seven percent of its oceans are protected in nature reserves and wilderness areas. We need to do a lot better.

We also must recognize that we’re up against a vicious cycle that’s only getting worse. The fossil-fuel companies and big chemical-agriculture conglomerates most directly destroying ecosystems are also major emitters of the greenhouse gases that drive climate change. And climate change, in turn, is making it harder for many animals and plants to survive in their natural habitats. That’s why, at a minimum, we urgently need a moratorium on extraction activities on our public lands and waters because those actions ravage wilderness areas many animal and plant species depend on. We must redirect the massive subsidies currently going to mining, logging and fossil-fuel companies to instead fund land and water conservation efforts, the recovery of endangered species and a transition to clean renewable energy.

We must transition away from destructive chemical agriculture, which poisons our land and water, to focus on regenerative organic agriculture. Instead of monoculture cash crops treated with excessive amounts of fertilizers and pesticides, regenerative organic farms use time-tested practices — like crop rotation, composting and free-range grazing — that improve soil and water quality, sequester carbon and promote biodiversity.

Infuriatingly, but not surprisingly, the Trump administration is pushing in the opposite direction. They just announced new rules that will gut the Endangered Species Act — which has long enjoyed bipartisan support — and will likely result in opening the way for destructive mining, logging, and oil and gas drilling in fragile habitats that must be protected. They say they want to prioritize economic development, but they’re going to jeopardize our thriving outdoor recreation industry and so much more.

This is all part of the administration’s war against climate science and the planet. They are also rolling back the Clean Power Plan with no credible replacement and seeking a massive expansion of offshore drilling that would make more than 90 percent of US waters available to oil and gas companies. They are slashing protections on our public lands and making it easier to dump chemicals in streams and wetlands, and drill for oil and gas in pristine wildernesses. It’s not surprising that air quality in America is getting worse under this president, with 15 percent more days with unhealthy air in his first two years in office than in the previous four, reversing decades of improvement and threatening our health and safety.

This is the exact wrong approach. Instead, we must build on the progress that was made in February when a strong majority in Congress passed the most significant public lands and waters legislation in a decade — expanding wilderness and parks, protecting rivers and establishing four new national monuments. That’s proof that it’s possible to do the right thing, even in these polarized times.

If we don’t act soon, thousands of animal and plant species will go the way of the dinosaurs. This is about the bees, the climbers and the trees. And if we work together and take a stand now, we can preserve the world’s biodiversity for future generations.