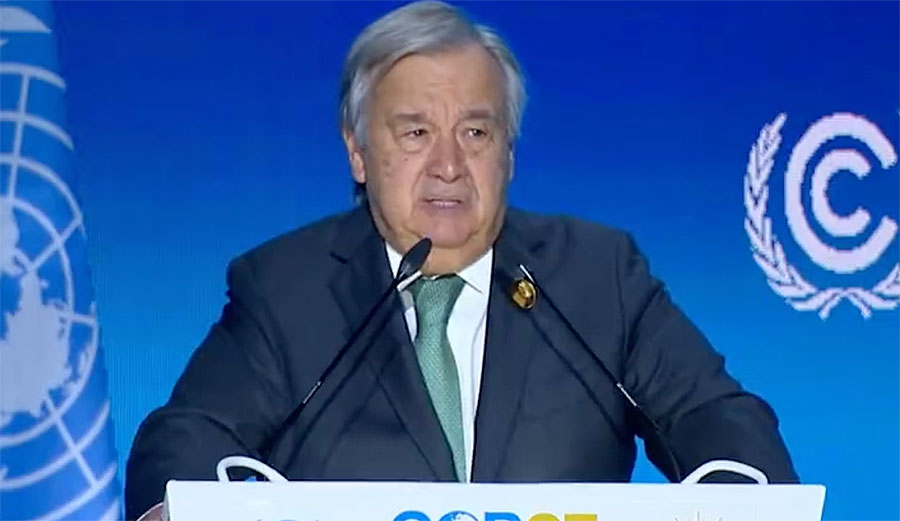 UN Secretary‑General António Guterres: “We are on a highway to climate hell with our foot still on the accelerator.” Image: Twitter

You know by now — or you should, at least — that scientists are more than worried about the direction the planet is heading. At the recent COP27 climate summit in Egypt, UN Secretary‑General António Guterres had some words of dire warning. “We are on a highway to climate hell,” he said, “with our foot still on the accelerator.”

Guterres said those words during the COP27 opening ceremony in Sharm el-Sheikh on November 7. “In just days, our planet’s population will cross a new threshold,” the Climate Chief continued. “The eight billionth member of our human family will be born… What will we tell that child when they ask what we did for the planet?”

Despite the fact that we know we need to do something about our planet’s rising temperatures, due mostly in part to humans in our search for more money and more comfort, we’re not doing enough.

“We are in the fight of our lives,” Guterres warned. “And we are losing. Greenhouse gas emissions keep growing. Global temperatures keep rising. And our planet is fast approaching tipping points that will make climate chaos irreversible.”

It’s time for nations to come together in solidarity, fully respecting all human rights and guaranteeing a safe space for environmental defenders & all actors in society to contribute to our climate response.

We need all hands on deck for faster, bolder #ClimateAction.#COP27 pic.twitter.com/HHJcl9E1Ot

It wasn’t all doom and gloom, though. Guterres did go on to say that, with the right interventions, we can still solve the problem. It won’t be an easy fix; readjusting the global population’s way of thinking is certainly no small task. But since we caused the problem, we can likely fix it.

“Human activity is the cause of the climate problem,” he explained. “So human action must be the solution. Action to re-establish ambition. And action to rebuild trust – especially between North and South. The science is clear: any hope of limiting temperature rise to 1.5°C [2.7°F] means achieving global net zero emissions by 2050. But that 1.5°C goal is on life support – and the machines are rattling. We are getting dangerously close to the point of no return.”

Global net zero is an extremely lofty goal, of course, but if science is to be believed — which it is — it’s necessary. There isn’t much time left before we hit the point of no return that scientists have been talking about for years now, but there’s still time. The only thing that remains to be seen is whether or not we’ll use it wisely.

“We need all hands on deck for faster, bolder climate action,” Guterres said. “A window of opportunity remains open, but only a narrow shaft of light remains. The global climate fight will be won or lost in this crucial decade – on our watch. One thing is certain: those that give up are sure to lose. So, let’s fight together – and let’s win.”