A New Underwater ‘Tent’ Might Make the Ocean Your Next Campsite 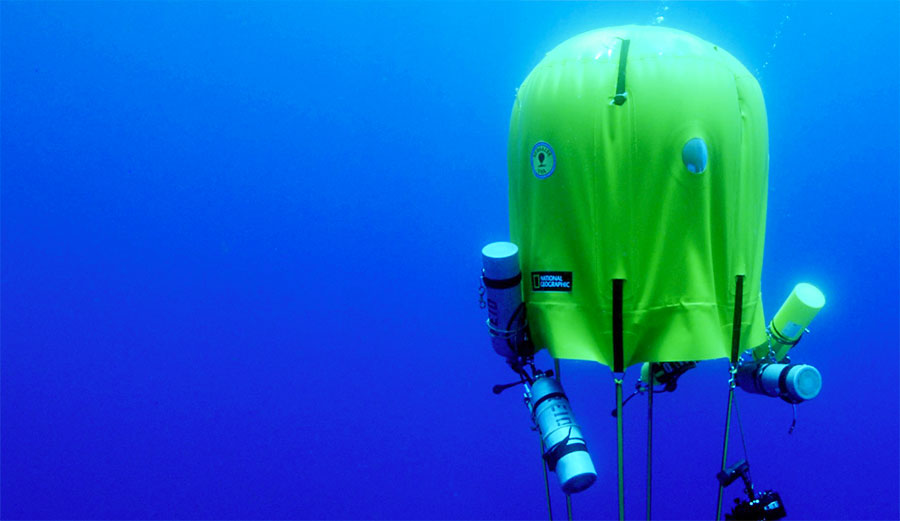 “…they enable the divers to respire equally well by letting down a cauldron; for this does not fill with water, but retains the air, for it is forced down straight into the water; since, if it inclines at all from an upright position, the water flows in.” -Aristotle (probably)

Humans are not meant to be underwater. At the very most, we’ve got a few measly minutes under there before we return to the surface, gasping for air with ropes of snot running from our noses. Our ears need to be popped on the way down, we need to wear great big plastic bubbles around our eyes to see, we often need to encase our bodies in a second skin made of rubber just to swim around, and we strap giant plastic fins to our feet in an effort to move around under there. We have fashioned all kinds of contraptions to increase the amount of time we have exploring that vast, mostly unexplored part of our world, but despite all of them, we cannot escape the fact that we are just not meant to be underwater. Still, though, have you ever seen a fish try to walk? They are laughably bad at it.

Thanks to a newly patented invention called the Ocean Space Habitat, however, we can now stay under for a little bit longer and go a little bit deeper. In short, it’s an underwater campsite, created by National Geographic explorer Michael Lombardi and a professor at New York University named Winslow Burleson. According to National Geographic, “the inflatable Ocean Space Habitat is a portable life-support system for divers who want to go deeper and stay longer than conventional SCUBA allows.”

See, even SCUBA has its limits. For every 30-or-so feet of depth, the weight of the water above a diver increases by 15 pounds per square inch. That pressure is why we can’t simply wrap our lips around a 100-foot garden hose and swim around to our hearts’ content. By the time you’ve hit about 20 feet, the weight of the water is strong enough to squash the weak little muscles that expand and contract your lungs enough to make breathing nearly impossible.

Although we’ve overcome that pesky little hurdle—in 1942, Jacques Cousteau and Emilie Gagnan created the valve system that let divers breathe compressed air—SCUBA comes with a few dangers, too. The deeper a human goes, the more dangerous things become. To get back to the surface without their joints filling with gas bubbles, a diver has to stop at various depths on the way up, waiting for a period of time to let that gas dissipate. The longer the diver is down, the longer they must wait—which, as you’ll remember, is a huge pain in the ass when you have to carry a tank of air around with you. That’s why Lombardi and Burleson came up with their wet little campsite: to let divers have a place to decompress easily without having to worry about running out of air or using a prohibitively expensive hyperbaric chamber.

Like most great ideas, the Ocean Space Habitat is extraordinarily simple: it’s an air-filled tent with SCUBA tanks hanging off it. The idea was first hatched back in 2012, after the NOAA shut down their last permanent underwater habitat. Lombardi was awarded a grant to try out a new concept. “This represents the end of an era,” he said at the time, “where large, costly, immobile habitats for science will take the backseat to a next wave of improved techniques for human exploration and intervention of the seafloor.”

According to Nat Geo, inside the Ocean Space Habitat, “several divers at a time can swim up into the dry chamber, remove gear, talk, eat, process samples, and even sleep through the decompression process.”

Habitats aren’t anything new—in fact, diving bells have been around for a long, long time. “They enable the divers to respire equally well by letting down a cauldron, for this does not fill with water, but retains the air, for it is forced straight down into the water.” Do you know who wrote that? Aristotle did, all the way back in the 4th century BC. Since then, of course, things have evolved just slightly, but the Ocean Space Habitat takes that very early idea and does it with better equipment.

The underwater tent is portable enough to be checked as luggage and relatively easy to break down and set up at a different site. “I like to think [it offers] an opportunity for a truly ‘immersive’ experience,” Lombardi wrote in an email to National Geographic. “The tent allows us to take home a bit more than we would as temporary visitors using conventional SCUBA techniques.”

While Lombardi is excited about the scientific applications, he’s most excited about something else: opening the doors for recreational divers who will get to stay under much longer than they ever have before. “Imagine if a tourist, normally limited to a one-hour dive, could stay under through that magical transition from sunlight to twilight to darkness—with all the life that emerges,” he said. “People could experience the ocean in a whole new way.”