What You Think You Know About the Climate Is Probably Wrong 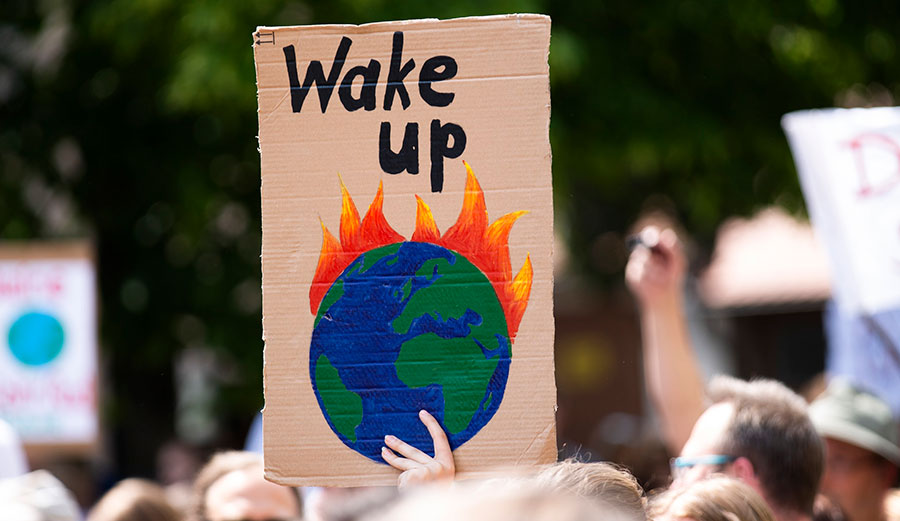 There’s a lot you likely don’t know about the climate. Photo: Markus Spiske/Unsplash

We humans have a natural tendency to focus on negative stories. We tend to assume things are worse than they really are, and going downhill fast. We forget how bad things were in the past and how far we’ve come.

In reality, the world is often better — and getting better — than we think, something I wrote about in my book, The Perils of Perception: Why We’re Wrong About Nearly Everything. Murder rates, deaths from terrorism and extreme poverty are all down. Life expectancy, health, and education levels are up. And yet, there is one vital, urgent exception to this rule: we still don’t realize how badly wrong our global climate and environment have gone.

A new survey of Britons which tested understanding of some key facts about the environment reveals the extent of environmental misperceptions. Rather than asking people what they thought might happen, this study instead focused on assessing knowledge of the world as it is right now.

One question, for example, was how many of the past 22 years have been the hottest on record?

The answer is 20, but the average guess was just 12. And one in five people guessed five or fewer.

Britons also overestimated some facts, such as how much air travel contributes to greenhouse gasses. The average guess was that 20 percent of global greenhouse gas emissions come from air travel, when in fact it only accounts for around 2 percent. Respondents also assumed that air travel’s emissions are about equal to that of all other forms of transport put together, when in reality, the latter contributes about ten times as much as flights. This is due to the relative rarity of flights compared to other forms of transport. 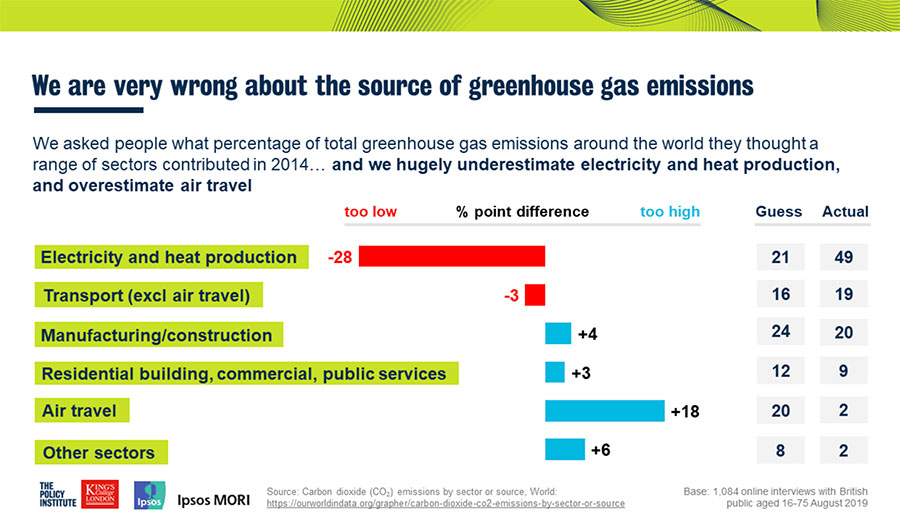 Yet despite aviation’s relatively limited contribution to emissions overall, one of the most effective environmental actions we can take as individuals is to fly less. A study by Swedish academics puts skipping one transatlantic flight as the third most effective action we can take, only behind the much more extreme options of having one fewer child and living entirely car-free. Curiously, only 25 percent of the British public pick out skipping a flight as one of the top three. Instead, 52 percent of people guessed that recycling was one of the best things we can do to reduce our emissions – when it’s seventh in this list of nine actions. 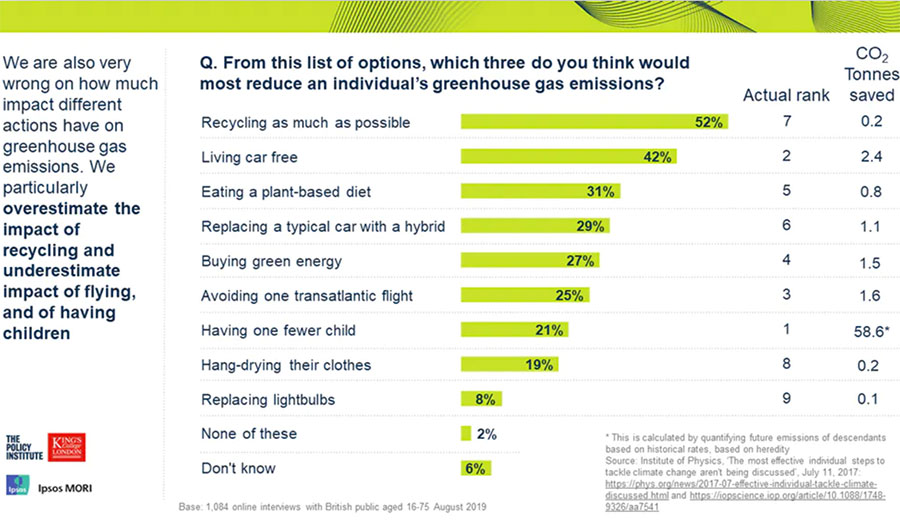 We are very wrong on what would most reduce our greenhouse gas emissions. Image: The Policy Institute, King’s College London

And that’s not our only misperception about recycling: we massively underestimate the problem of plastic waste. Britons guessed that about half of the 6.3 billion tons of plastic waste humans have produced globally is still out there in the environment (in our oceans, our soil, our water, even inside our bodies), when in reality it’s an incredible 79 percent. And how much plastic waste has been recycled? Respondents guessed about a quarter, when in reality it’s only 9 percent.

We also don’t realize just how extreme the loss of animal species over the past decade has been. Only a third correctly identify that the population sizes of mammals, birds, fish and reptiles in the world have declined by 60 percent since 1970. 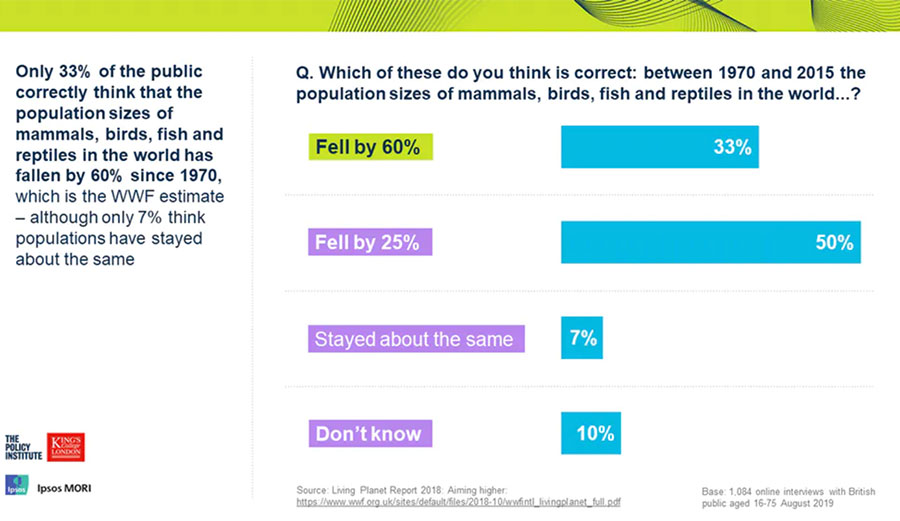 Only a third of us correctly guess that animal populations have dropped by 60 percent since 1970. Image: The Policy Institute, King’s College London

Anxiety and Other People

But our lack of understanding of the scale of the issues doesn’t mean we’re not worried. In fact, recent polling of Britons by Ipsos MORI measured record-breaking levels of concern. Our new polling also shows that two-thirds of Britons reject Donald Trump’s assertion that global warming is an “expensive hoax” – and instead two-thirds agree with the recent UK Parliament declaration that we are facing a “climate change emergency, with the threat of irreversible destruction of our environment in our lifetime”. 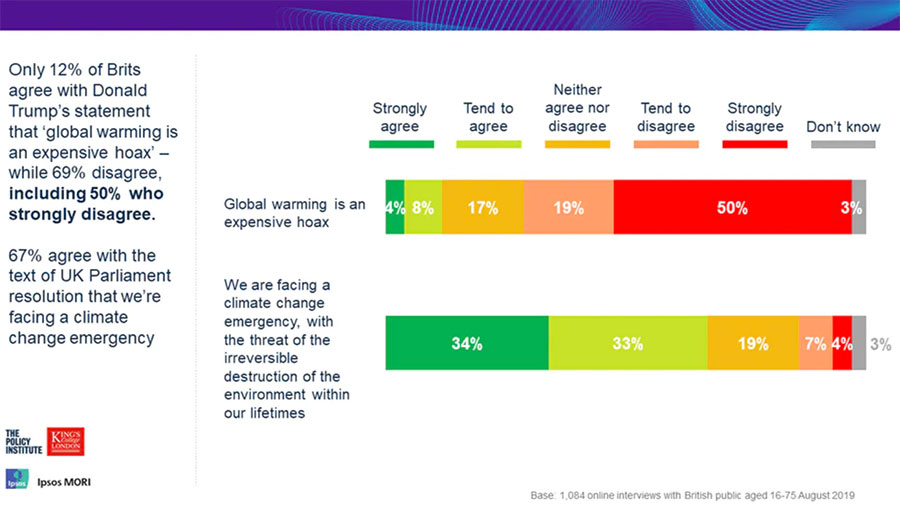 Our largest misconceptions seem to be around what other people think, a phenomenon that academics call our pluralistic ignorance: our perception is that other people’s attitudes are the problem.

Despite record levels of public concern, 73 percent believe that other people are not worried enough — while only 16 percent say we ourselves are not worried enough. Half of us say that other people think it’s too late to do anything to prevent a climate change emergency, but only one in five of us admits to having given up hope. This misunderstanding of the norm is serious, as it affects our own sense of efficacy: if others aren’t bothered, what’s the point in us acting? 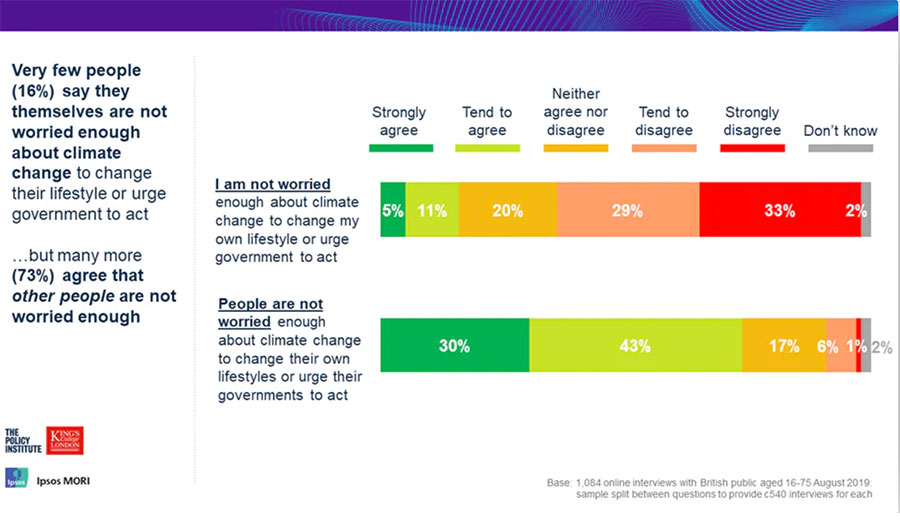 ‘Other people’ are not worried enough about climate change. Image: The Policy Institute, King’s College London

It’s naive to think that bombarding people with facts will incite them to act, no matter how extraordinary or terrifying these facts may be. But it is equally as naive to think that we can figure out exactly the right emotional buttons to push: we just don’t know enough yet about how fear, hope and a sense of efficacy interact in motivating action in different people.

Nevertheless, a little more understanding of the scale of the issues and how we individually can act most effectively couldn’t hurt. And perhaps most crucially, we need to remember that we are not alone in our concern. Anxiety about climate change has become the norm, and this is a fact that we can harness and put to use.