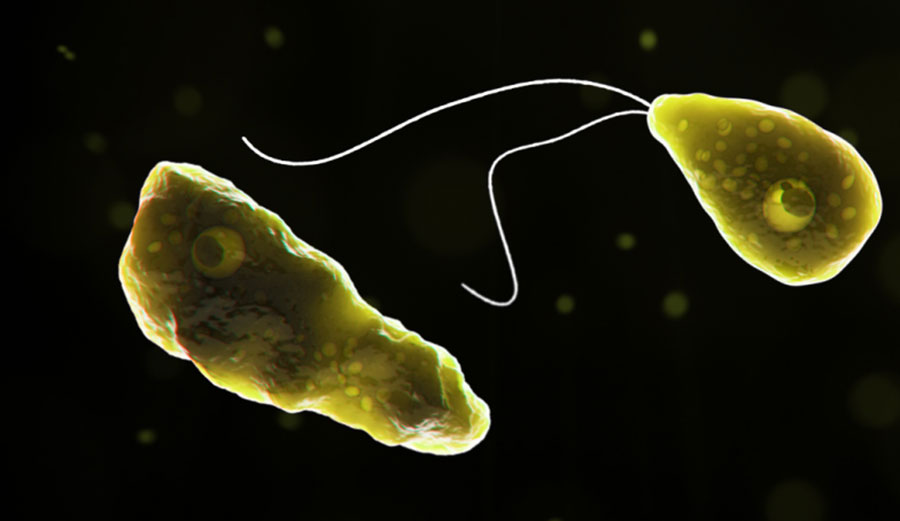 Composed of a single cell, amoeba seem harmless enough: They look like playful critters waltzing under the spotlight of a microscope until they come upon a group of bacteria. Then, these previously innocuous amoeba suddenly morph into sinister blobs, engulfing the bacteria and slowly ripping them apart with a bevy of digestive enzymes. It’s hard to cry over murdered bacteria, but the digestive power of amoeba is the stuff of nightmares when it plays out in a human brain.

Infections with Naegleria fowleri, the so-called brain-eating amoeba, are extremely rare, but also extremely deadly. Only 146 cases have been reported in the U.S. since 1962, with only four surviving the infection; so there is a 97% chance of death. Sadly, on July 22, a 59-year-old North Carolina man became the first person to die of the infection this year after swimming in a lake at a water park.

I study parasites and have a particular interest in those that target the brain, which is why this amoeba captured my interest.

How N. fowleri Gets Into the Brain

N. fowleri dwells in warm bodies of fresh water where it dines on bacteria in the sediment. As such, most infections with this amoeba in the U.S. have occurred in southern states, especially Texas and Florida, during the summer. When the sediment of a lake is disrupted, amoeba get stirred into the water. Swimmers can then inhale the parasite through their nose. From there, N. fowleri invades the olfactory nerves and migrates to the brain, where it causes a dangerous condition called primary amoebic meningoencephalitis.

While swimming in fresh water is the most likely source of this amoeba, this same organism and other species of amoeba can cause brain infections in people who use tap water instead of sterile water or saline when using the nasal-flushing Neti pot.

The brain is moist and warm, just like the lakes and hot springs where the amoeba thrives. But the brain doesn’t have bacteria for the amoeba to eat, so the organism attacks brain cells for nutrients.

The immune system does not sit idly by, however, while the parasite eats its way through the brain. It unleashes a massive swarm of immune cells to the infected zone, which causes inflammation and brain swelling. Unfortunately for the person whose brain is infected, this battle is being waged inside a sturdy skull, which cannot expand to accommodate a swelling brain. The increase in cranial pressure disrupts the brain’s connection to the spinal cord, compromising communication with other parts of the body like the respiratory system. 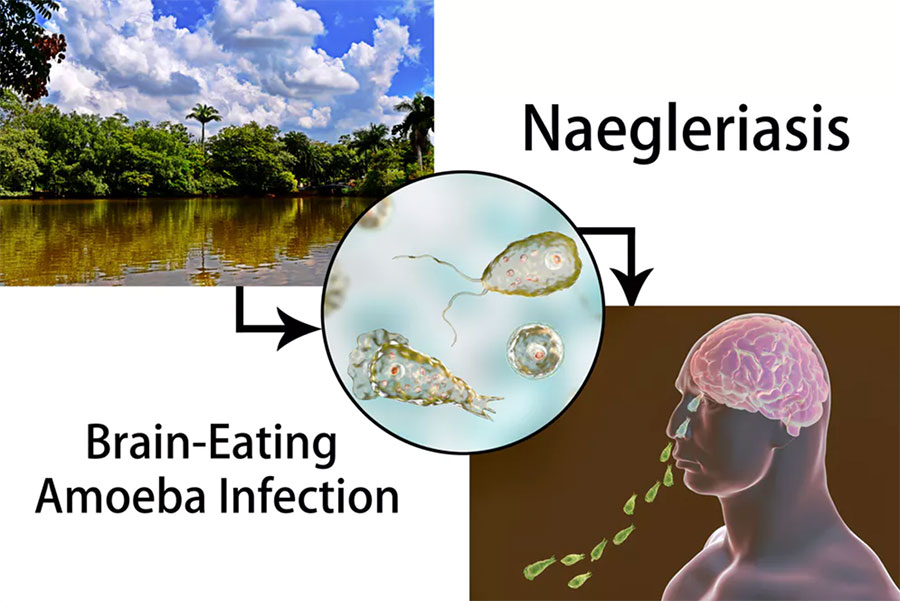 A Stealthy and Quick Assassin

Symptoms can appear as early as two days, or as late as two weeks, following inhalation of N. fowleri. The first symptoms include headache, fever, nausea and vomiting, and a change in the sense of smell or taste (due to damaged olfactory nerves mentioned above). The infection rapidly progresses through the central nervous system, producing stiff neck, confusion, fatigue, loss of balance, seizures and hallucinations. Patients usually succumb to the infection within five to seven days after the onset of symptoms.

There are several reasons why N. fowleri is so deadly. First, the presence of the parasite leads to rapid and irrevocable destruction of critical brain tissue. Second, the initial symptoms can easily be mistaken for a less serious illness, costing valuable treatment time. Third, there is no quick diagnostic test for N. fowleri, and patients are often mistreated for viral or bacterial meningitis.

Finally, there are no established medications with proven efficacy against the amoeba, although miltefosine is showing promise. Compounding the problem is the fact that most drugs have trouble penetrating the brain and, as primary amoebic meningoencephalitis is a rare disease, very little research is being conducted.

It is important to keep in mind that millions of people are exposed to N. fowleri and never fall ill. Those who study this amoeba don’t know why a tiny subset of exposed individuals develop primary amoebic meningoencephalitis; they may have a genetic difference that makes them more vulnerable to the infection, or may have forcefully inhaled an overwhelming amount of the parasite.

So if you’re going swimming in warm freshwater lakes or streams, especially if you like diving or going under water, consider wearing a nose clip to help keep amoeba parasites out of your brain. Experts also advise that people avoid stirring up the sediment at the bottom of these bodies of water where the amoeba live.