Needless to say, we at The Inertia are beyond stoked to have our annual EVOLVE summit back up and running as an in-person event, and a massive thank you goes out to everyone who made it to the SmogShoppe, a gorgeous 100 percent, solar-powered venue that played host to our gathering in the Culver City Design District. With a sold-out crowd in attendance, the night was chock-full of inspiring conversations, exciting films, and delicious food and drink thanks to Sierra Nevada, White Claw, and Wahoo’s Fish Tacos, with sustainable drinkwear by Klean Kanteen and non-alcoholic beverages by Liquid Death Water and Health-Ade Kombucha.

“It’s a completely different world from when we last gathered in person two years ago,” said The Inertia‘s Zach Weisberg. “Making time and space to safely unite and celebrate folks on the vanguard of social and environmental impact – and inspiring innovation and embracing the best qualities of humanity – curiosity, optimism, and respect – that’s what it’s all about. Our goal is to absorb some of these thoughts and, as a community, take them with us into the world – to continue to enjoy the oceans and mountains, and make them and the surrounding culture a little better – in whatever small, or preferably, huge way that we can.”

The night kicked off with a conversation on Surf and Outdoors as a Force for Good between Mario Ordonez Calderon and Kat Reynolds, co-founders of Un Mar de Colores, as well as Ryan Harris of Earth Technologies Surfboards who showed up with a quiver full of pink surfboards from his recent Pink Board Project to raffle off. The conversation centered around the work that Mario and Kat have been doing to expand access to surfing in underserved communities, and the specifics of how their program tackles the underlying sociological norms that historically have made surfing and the outdoors in general less accessible to their pupils. 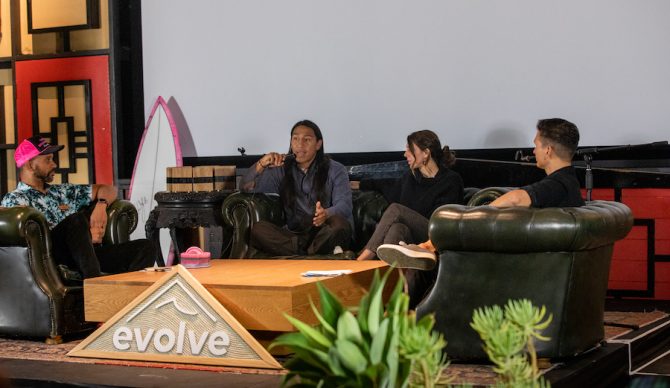 Ryan Harris, Mario Ordonez Calderon and Kat Miller chat about the power of surf and the outdoors as a force for good. Photo: Megan Youngblood

“From my perspective, being the child of immigrants, you’re kinda pushed to succeed more than you are pushed to enjoy yourself,” said Mario. “And then there’s parents not knowing what surfing is or how to react to it. The first time I went surfing, up at County Line, I went over the falls and took a fin to my arm. Ended up getting 17 stitches and when I came home my dad said: ‘Porque hicistes eso, no sabes que estas haciendo.‘ Basically, “Why would you do something you don’t know how to do?” And he’s the most supportive dad in the world, but that’s the cultural hump that I had to get over. And that’s part of what Mar de Colores does. We work with the parents as well to show them that what their kids are doing is beneficial, and teach them how to read the water so they can take their kids surfing in a safe way.” 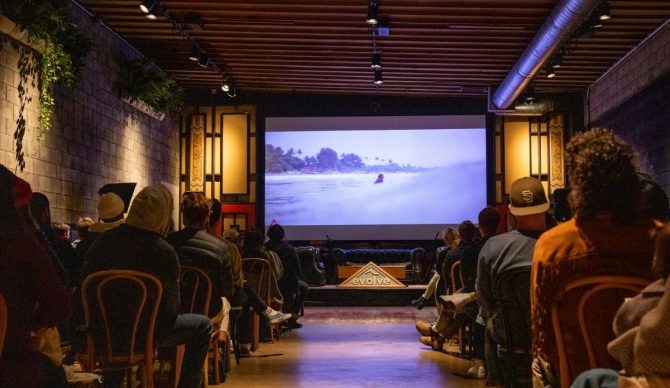 A packed house enjoys We Are Like Waves, a film by The Inertia‘s Jordyn Romero. Photo: The Inertia/Megan Youngblood

The Inertia‘s own Films Manager, Jordyn Romero, screened her latest award-winning documentary We Are Like Waves, which follows the story of Sanu, a young girl from Sri Lanka, as she works against cultural norms to become one of the first native female surfers in her country. Jordyn spoke to some of the work that she did to recognize her place as a foreign filmmaker, and balancing the importance of bringing such stories to light while avoiding falling into the “white savior” trope which can be far too present in such cultural exchanges.

“I think you have to be very aware of your role when you are going somewhere to tell this type of story,” Jordyn said. “Our approach was to have that awareness while we are there and know that our job is to amplify and tell this story in the truest way possible. Sanu was a part of it from the very beginning, she was in all of our script meetings, and throughout the process we were constantly getting her feedback to make sure everything was true to how she felt and how she wanted the story to be told. In the end, it felt like we were just vessels for her to tell her own story, as opposed to us telling her story for her.”

Jordyn hopes that her film and others like it will help shift the mindset of filmmakers going to different countries and push them to consider their role more strongly and tell their stories in the most respectful way possible. 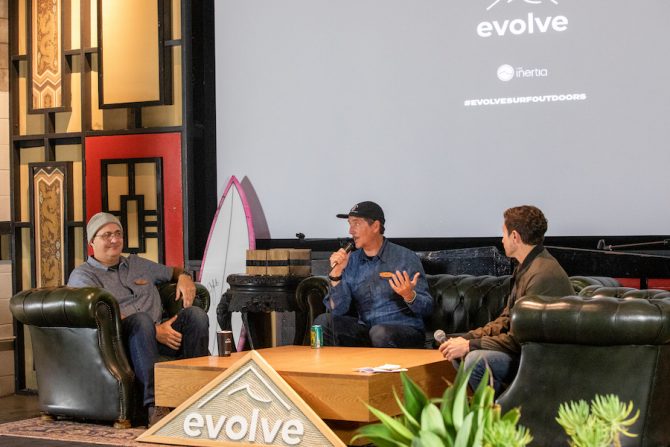 Michael Stewart and Kevin Whilden discuss how planting kelp forests in the ocean could help save our planet. Photo: Megan Youngblood.

Kevin Whilden and Michael Stewart of Sustainable Surf shared the great strides they’ve made with their SeaTrees initiative, and how planting and protecting coastal ecosystems has become the most effective way to suck carbon out of the atmosphere.

“We started Sustainable Surf about a decade ago, and the SeaTrees program – getting people to not only do less bad but actual good – has been something that we’ve been working on since before Sustainable Surf, but no one wanted to hear that yet,” said Michael Stewart. “So we had to start with other programs within surf culture like the Eco Board project, and working with the WSL, doing everything we could to make it cool and easy for people to live more ocean friendly lives.” With that public awareness built, they launched SeaTrees. By making purchases through supporting brands or contributing directly to the program we can all help SeaTrees carry out their mission of working with coastal communities to plant mangroves, repopulate kelp forests, and rebuild coral ecosystems, so called “Blue Carbon” ecosystems, while creating jobs at the same time.

“Nobody thinks about the ocean as the solution to climate change, but they should,” said Kevin Whilden. “The ocean actually holds 90 percent of carbon in the carbon cycle, as opposed to two percent in the atmosphere. So if we’re going to take carbon out of the atmosphere the ocean is a great place to put it. Blue Carbon ecosystems are plants that live on the edge of the ocean like kelp, coral, and mangroves. And these ecosystems are far better at sequestering carbon than any other ecosystems that exists. A mangrove sequesters ten times more carbon per acre than a terrestrial rainforest.”

“But it’s also about biodiversity and species protection,” Kevin continued. In Southern California, SeaTrees has partnered with The Bay Foundation to cull sea urchin populations which have been destroying kelp beds on a massive scale due to a lack of natural predators and turning them into “urchin barrens.” And their efforts have made a difference. “Over a few months time, the areas we were working on have become unrecognizable to us with such an incredible amount of growth. It’s an incredible thing to be a part of,” said Terry Herzik, a commercial diver who has been working with SeaTrees to carry out the urchin culling process. 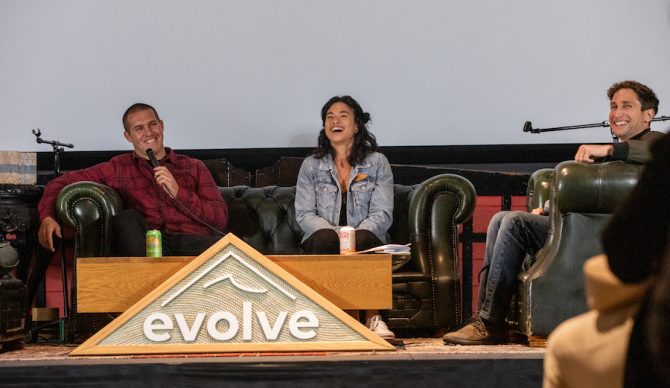 After a quick break to mingle and grab popcorn, we hosted the world premiere of Peak California, The Inertia’s latest film featuring big-wave surfer Jojo Roper and climber Nina Williams. The premise is simple. Take two highly successful athletes in their respective disciplines and have them trade places. Nina taught Jojo, who is afraid of heights, how to climb. Jojo taught Nina, who has a fear of ocean waves, how to surf. The result was a heartwarming cultural exchange between surfing and climbing, and a reminder that being vulnerable and embracing your inner student is an important and fulfilling activity.

Onstage and on screen, Jojo and Nina related to the experience of stepping outside of their respective comfort zones, showing just how fun being a “kook” or “gumby” can be. 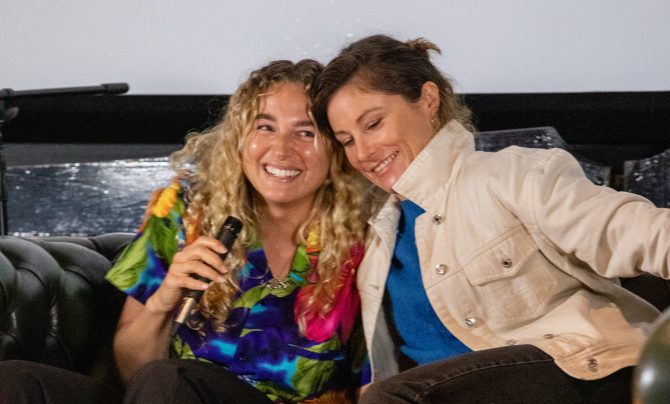 Robin has been a huge inspiration to young ladies like Izzi who are pushing the boundaries of women in action sports. Photo: Megan Youngblood.

Last, but certainly not least, we had the honor of premiering an episode from Robin Van Gyn’s FABRIC series, a five-part documentary about female athletes, artists, and activists using their platforms in surfing, snowboarding, and skateboarding for good, and the work that goes into doing so. Robin was joined by world champion and professional big-wave surfer Izzi Gomez, who starred in the section of Van Gyn’s series titled “Knowledge.”

“At first we were just going to go out and make a film, but then there was so much going on with 21 different athletes, artists, musicians, and activists, it became impossible to cut it all down to an hour or even an hour and a half. So we grouped different people by subject and turned it into a series,” said Robin. “I wanted something different — I wanted to see other people talk about stuff and that’s all that I really could do, use my platform to give someone else the opportunity to say something and tell their own story and let it evolve from there.”

“I feel like the surf industry is just so saturated with edits of like six minutes of air reverses,” said Izzi. “So it was refreshing to be a part of something different with so many different topics. I’ve really never seen anything like it.” 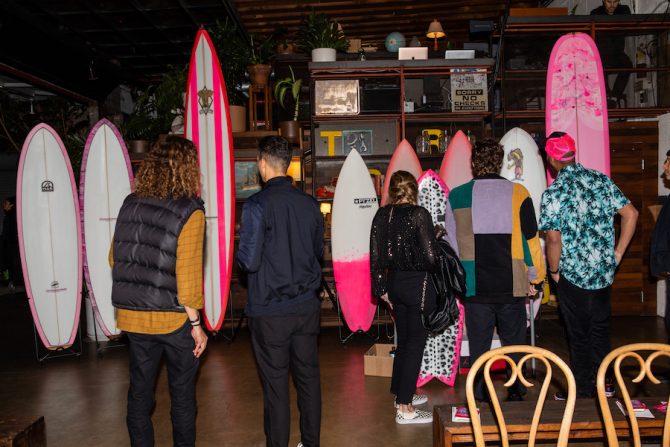 A fine selection of shapes were up for grabs, including a single fin gun by Lyle Carlson and three Firewire Spitfires. Photo: Megan Youngblood.

The night ended with an exciting Pink Board Project raffle with shapes from renowned surfboard shapers like Lyle Carlson, Pyzel, Barahona, and a selection from Firewire – all glassed pink in Ryan Harris’ Earth Technologies eco-friendly construction. Panelist Robin Van Gyn walked away with a midlength, and seven other lucky people, surfers and soon-to-be surfers alike, walked away with a pink surfboard in hand.

Select panels from The Inertia’s EVOLVE 2021 will be made available to view online. Check back soon for more. Per Los Angeles health guidelines, the event adopted a strict COVID protocol to keep attendees and the surrounding community safe.

A massive thank you goes out to our partners at Sierra Nevada, White Claw, Chevrolet, and Klean Kanteen for making this monumental gathering possible. We can’t wait for next year.