Paul Van Doren and Vans: How One Man Changed the Shoe Industry Forever 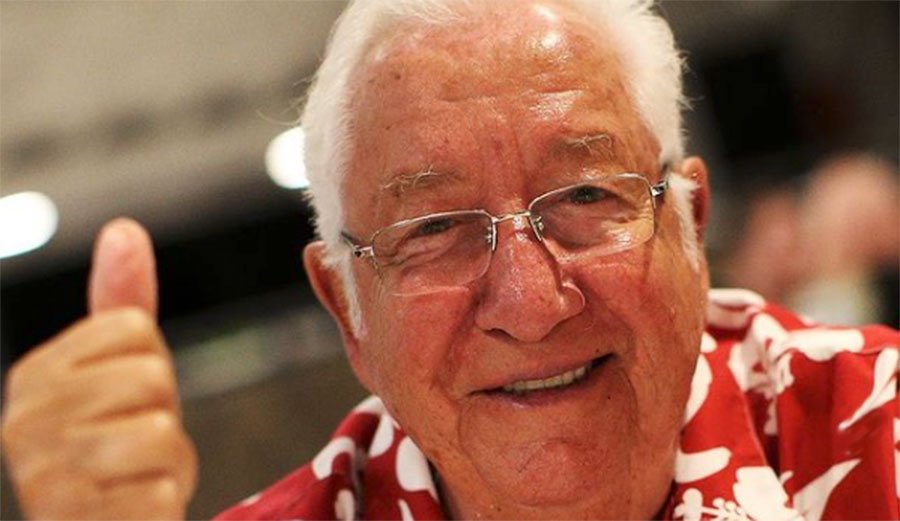 Paul Van Doren died on May 6, 2021. With decades of hard work, ingenuity, and foresight, he helped shape an entire industry. Photo: Vans/Instagram

In 1982, Sean Penn fell out of a van filled with pot smoke. On his feet were a pair of checkered slip ons made by Vans. Almost overnight, those shoes became a sensation across the United States. Within a few years, Vans would be one of the most successful brands in the world. On May 6, 2021, the man behind that brand, Paul Van Doren, died in Fullerton, California. He was 90 years old.

Of course, Vans was around long before that iconic scene from Fast Times at Ridgemont High. For nearly two decades, in fact, and the brand was widely popular in skateboarding and BMX riding, especially in Southern California. But outside those relatively small worlds, Vans wasn’t even close to the juggernaut of a company it would become. And what it would eventually become was because of Van Doren’s singular focus on making a well-made, simple shoe.

Van Doren was born in 1930, in Braintree, Massachusetts.  He dropped out of high school at 16 and got a job at the the Randolph Rubber Manufacturing Company, where canvas shoes were made. At the time, he probably didn’t expect to be one of the biggest shoe-makers in the world.

“My idea was to make the best shoe with the best materials and workmanship,” he wrote in Authentic, a memoir published just a few days before his death. “Making shoes is an art. I never wanted to make second-rate anything, and when it came to shoes, vulcanized rubber was synonymous with quality.”

In 1966, the Van Doren Rubber Company officially opened its doors at 704 East Broadway in Anaheim, California. Paul’s brother James joined the team, along with an investor named Serge D’Elia and another colleague, Gordon Lee.

Their idea was simple: make the shoes in a nearby factory in Anaheim to cut out the middle man. It made it easy to fill custom orders for different sizes at small volumes and in a wide variety of patterns or colors. At the time, men’s shoes sold for $4.49 and women’s shoes for a whopping $2.29.

The thing that first set Vans apart was the now-iconic diamond pattern on the sole of the shoes. Since they were using vulcanization, the rubber was stickier than most shoe soles at the time, and skateboarders found that extra grip extraordinarily helpful. Since skateboarding was still a slow-growing sport, Van Doren immediately saw an opportunity to grab hold of a new market, and skateboarding became the focus of Vans.

“Until the skateboarders came along, Vans had no real direction, no specific purpose as a business other than to make the best shoes possible,” Van Doren explained in Authentic. “When skateboarders adopted Vans, ultimately, they gave us an outward culture and an inward purpose.”

The New York Times reported that the Van Doren Rubber Co. even allowed skateboarders to buy one shoe at a time — something especially important to skateboarders, as one of their shoes would wear down far quicker than the other depending on whether they were goofy or regular footed. Within a decade of opening their first store, the founders were talking directly with skateboarders and taking their advice to heart. They were creating shoes solely for skateboarders, and skateboarders loved it.

“Everybody else was kicking these kids out of the park, kicking them out of pools,” Van Doren told Los Angeles magazine. “And here’s a company listening to them, backing them and making shoes for them.”

Soon, Tony Alva and Stacy Peralta were on the team. That was before they were legends, but Van Doren and Vans saw what they could become if skateboarding took off the way he expected it to. And he was right. With their help, Vans created the Era, one of the most iconic shoes on the market today.

Still though, Vans wasn’t mainstream. In the early 1980s, the brand was mostly found in Southern California. But then Sean Penn took the role of Spicoli and sparked a stereotype that still lasts today. Rumor has it that the choice of the Vans checkered slip-ons was Penn’s and Penn’s alone. Sometime in 1982, he walked into a store in Santa Monica and walked out with a pair. He liked them so much he decided to wear them for the role of Spicoli, and in doing so gave the first kick to a ball that would eventually roll down a very long road.

“In those days, a lot of actors could decide what they wanted as their costume,” Fast Times director Amy Heckerling once told The Inertia contributor Shelby Stanger. “This was before the days of product placement and before you had to clear products before using them on film.”

Heckerling, who grew up in the Bronx, wasn’t familiar with California surf culture. When Sean Penn brought in the Vans slip-ons, she decided to trust his judgement. That trust turned out to be a real boon for Vans, and, according to Heckerling, once the movie hit video stores, the phone lines at Vans were clogged with kids trying to get their hands on a pair.

Within a few months, Vans more than doubled in size, going from a very respectable $20 million company to a $45 million one. Now, all these years later, Vans are all over the world. Celebrities wear them on the red carpet, huge brands like Disney have collaborations, and they’ve even been worn inside the White House.

Throughout it all, however, Van Doren and Vans didn’t forget about the people who made the brand what it is. The company sponsors surfers, snowboarders, and artists now, too. Vans was behind the Warped Tour for a quarter a of a century, and, of course, sponsors the Triple Crown of Surfing.

Van Doren’s impact on multiple industries can’t be understated. Unlike many founders of global brands, he held the respect of everyone who worked with him until he died. Still, even in death, his memory is held in the highest esteem.

“We lost our founding father, but his roots run deep with us,” wrote Tony Alva when the news of Van Doren’s death was released. “We will carry on his teachings and traditions. One day at a time.”