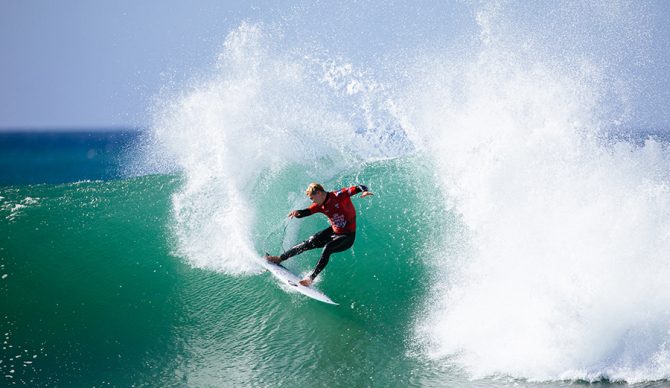 Shaper Marcio Zouvi was born in Rio de Janeiro but has been based in the States since the 1980s. In 1992 he formed Sharp Eye Surfboards and in the last 25 years, has turned it into a global force. His most notable surfer-shaper relationship has been with Filipe Toledo. However, at the Corona Open J-Bay, Jack Robinson, Kanoa Igarashi, Baron Mamiya, Tatiana Weston-Webb, Johanne Defay, and Miguel Pupo were all on Sharp Eyes. I caught up with him in his San Diego shaping bay.

With J-Bay such a unique wave, are the team rider’s boards very different from other stops on tour?

Yes, it’s a unique wave, but we have worked with our riders at the wave before, so we tend to go over what was used the last time and see which boards worked best on the racier wave. Then we adjust based on the surfer and any changes they’ve had. So, for example, Filipe has gained weight as he’s been working out and getting stronger, so there’s been a bit more volume in his boards. 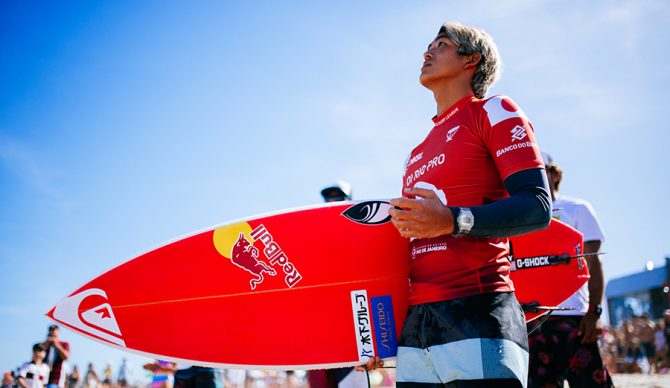 According to Marcio, no one tweaks his gear more than Kanoa. Photo: Thiago Diz//World Surf League

Do the surfers ever ask for changes themselves, based on how they want to approach J-Bay?

Some of the guys have asked for changes, but we work so closely together that it is pretty incremental and nothing drastic before an event. I would say it’s Kanoa that likes to experiment the most; he never settles and always likes to see what’s out there. It’s challenging, but as a shaper that’s exactly what you want from a team rider.

Looking at Baron, it was his first time competing at J-Bay, how do you approach his boards?

With Baron as it is his first time, I just built the boards that I think would go the best for him at J-Bay. So that was the 77 model, with a good amount of nose rocker, but with continuous flow. That’s the model Filipe won there a few years back and so we just varied the size and the volume to fit Baron. It’s a learning curve for him, and we’ll build on his feedback and the lessons he learned this year.

Could you provide the exact model and dimensions of a few of the team’s boards?

Apart from the surfer’s size why the differences?

It comes down to the ability and approach of each surfer. Kanoa has been asking for more drive, so he’s been lowering the tail rocker for control. The pros are he goes super-fast and can engage the rail at high speed, but it can lead to some skipping out. He feels he can control it and that’s the direction he wants to go. Others want an easier turning radius, as Filipe does on his boards, and so the surfer’s approach dictates the dimensions and bottom shape.

Jack Robinson is officially on the team. What’s been the process of quickly getting up to speed with him?

Yep, Jack’s signed the contract and so we have been experimenting. It’s hard because the WSL schedule is so tight, but my Australian crew has been providing a lot of boards for Jack to try, and I’ve supplied my shapes. So, he’s been riding all the models, and he’s been narrowing down the models and the dimensions to the ones he likes the best. 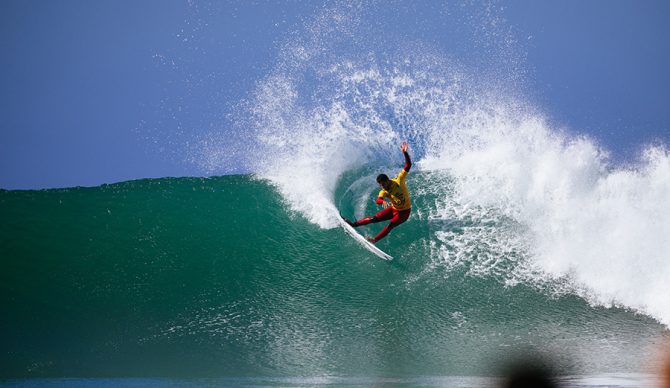 The man has a thing for turn radius. Photo: Beatriz Ryder//World Surf League

Have you been surprised by his success?

Yes, and no. We knew Jack well, but when he first made the Tour we didn’t think he was surfing to his potential. It’s really hard to make the adjustments and adapt to all the different waves on tour. That’s why the equipment makes all the difference. A lot of the shapers can make great boards, but you have to work closely with a team to dial the boards for each stop on tour. Without that, it leaves no room for error. Mistakes happen. I think for Jack that was the key. He hadn’t had that support before, and it allowed him to flair and surf to his potential. I really think he will be a world champion one day.

It seems there’s still a huge focus on the CT for you, and other shapers.

Absolutely, so much time and effort are devoted to the team riders and their surfing in competition. It shows that high-performance surfboards still rely on elite WSL events. It’s challenging and exciting to see the results and awesome to celebrate the victories.