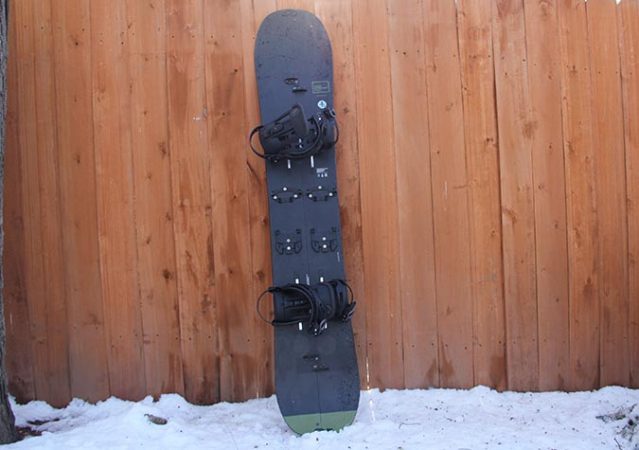 The Flight Attendant X: an easy choice for every type of backcountry rider.

The dog’s head was barely above the snow. Her body expanded and contracted in heavy pants and you could see her breath melting the tiny snowflakes that had fallen on the end of her soft, brown nose. After descending 600 feet or so I’d waited 10 minutes for her to catch up. She looked up at me anxiously–the deep stare and soft whine in anticipation of my next move gave her away. Maggie, a Springer Spaniel, has been a longtime friend of mine in the backcountry. But she was struggling. Big time.

She reminded me of that old college roommate you still see on occasion and sometimes try to convince to come out on powder days. The friend you thought was fit enough he wouldn’t go full junk show in the backcountry or on a hike out of bounds–but he barely makes it back to the car in a sweaty heap of cotton, the stale smell of alcohol seeping out of his pores in a wet, gooey mess.

That junk show was my dog, minus the putrid, day-old alcohol smell. I was out testing the hub-bub around Burton’s latest splitboard, the Family Tree Flight Attendant X. Fortunately, it was performing better than the dog in the two feet of fresh, ultra-dry powder. You couldn’t have asked for better testing conditions. But “no friends on a powder day” doesn’t apply to this pooch. Maggie isn’t huge, so I helped her inside my backpack and made a slow traverse down to an old snow-covered dirt road where she could take steps without sinking up to her chest and switched my board into walk mode.

If you didn’t already know how to annoy your friends, insist on taking your dog with you on backcountry trips. In short, they can be a pain in the ass. But the Flight Attendant X? Definitely not. The hype and positive reviews around this board are real: it’s extremely lightweight, easy to adjust, and ultra playful in the backcountry. If you’re more the type that enjoys rolling a fatty and riding low-stress pow in the mountains, this is your board (avalanche awareness always applies, of course). Plus Burton has become a one-stop shop in the backcountry split world, licensing the best parts in the industry to create a killer setup. It’s like buying one of your favorite mountain bike brands that’s loaded with the best components in the game from other companies. It makes for a good ride. 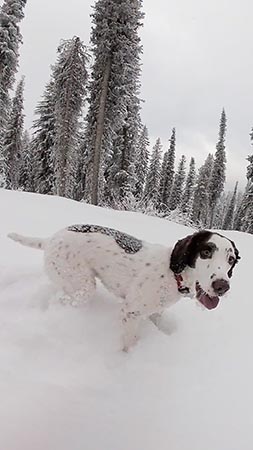 Before I get into the particulars, though, a bit about the tester: I come from a family of Nordic nerds. They taught me to ski on freeheels as a grom. I was raised in the backcountry but swung both ways with gear. As I told one Twitter user, I don’t identify as a skier or snowboarder, but ride both.

Now, for the tech, the Flight Attendant X gets busy with the “Channel” system—used in Burton’s solid boards since 2007 and introduced to the company’s split line in 2014. It’s essentially a hollow slider that controls the plastic pucks for stance adjustment on either foot, making tiny tweaks simple. “Mounting screws and inserts in a traditional system to adjust stance width or angles is really tedious,” says Scott Seward, a Burton design engineer. “Having two sliding sets of inserts makes it so easy to micro-adjust your stance in the garage or on the snow.” Whether you ride in a freestyle or more directional stance, the adjustments are super easy.

Burton knows boards. They were the original. But they’re also a big enough brand to be able to make a technical piece of gear like a splitboard better by partnering with the right companies: Voile made the original splitboard and its connective devices that keep the board in one piece during the ride down are still the best in the industry, which Burton utilizes. As is Voile’s puck system (where the bindings attach to the board for downhill sliding). 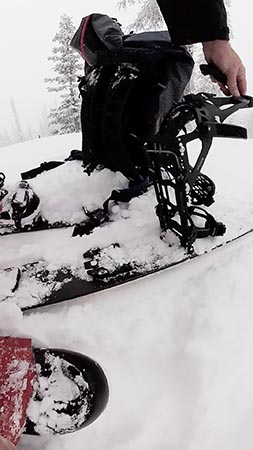 The Hitchhiker Bindings in action. Burton partnered with Spark R&D on these bomber attachments.

But one of Burton’s most recent partnerships might be its most important: Spark R&D Bindings has established itself as an industry standard. Will Ritter’s Bozeman, Mont.-based company created a catch-all binding that can be switched between touring and shred mode by simply lifting a toe piece. Adding its own twist on straps (Hammockstrap™ and Supergrip Capstrap™), Burton now uses Spark’s Tesla1 technology in its Hitchhiker Binding, which can be used on most any system with the Voile pucks that come with it. It’s about as solid as one can get in the complicated world of splitboard bindings. Burton’s work with G3 skins rounds out its partnerships on the Flight Attendant X.

Now, in terms of material, Burton takes care of its own. The Flight Attendant X is as light as you’ll find in the industry, thanks to a mystery material the company uses (but not so mysterious after Seward explained it): “I would say one of the biggest contributors to the light weight is the composite, pre-cured fiberglass and carbon blended material,” he said. “We also removed the top sheets, which saves us weight, and then not using petroleum saves a bunch of weight, too, which really improves the sustainability of the board as well.” 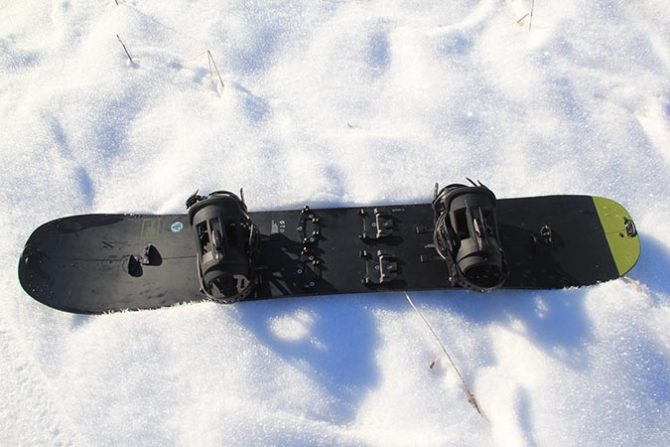 If you’re looking for a knock on the board—which depends entirely on your riding style—you may find it in its lack of stiffness. This a powder play toy. I did feel the flex when traversing a long, packed cat track when touring a resort before it opened. If you’re going to be riding with your hand on the wall, dug into your edges on steeper, icier or more hardpack descents, you might want to go with a different option (or a solid board with stiff boots and crampons). “Flex is such a crazy thing as it’s totally preference,” said Seward. “We’ve had people tell us they’d like it to be stiffer, and an equal number would like it to be softer, so we created a board in the middle that satisfies a broad spectrum.”

All this tech means the Flight Attendant X isn’t cheap. But the board–which is sort of a hybrid shape between freeride directional and twin tip freestyle–runs with a three-year warranty so your investment will be protected.

Seward hinted at a stiffer model in the future but for now, the Flight Attendant X is a solid option for the everyman. It’s ideal on the deepest of powder days, the type that drowns small animals. So maybe leave the dog at home. 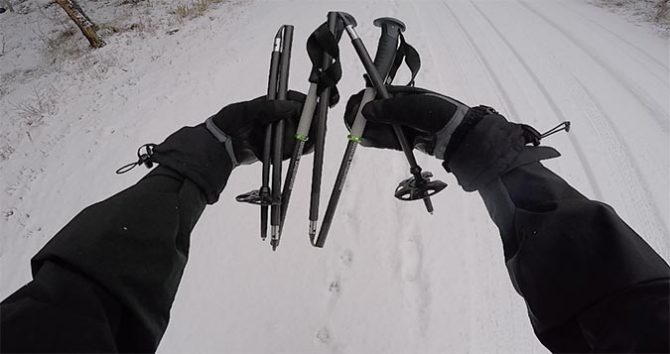 Editor’s Note: Backcountry riding is inherently dangerous. But it’s easy to increase your knowledge. Know Before You Go is offering a free online avalanche course. Be safe out there.