The Best Drones for Surf Photography According to the Pros 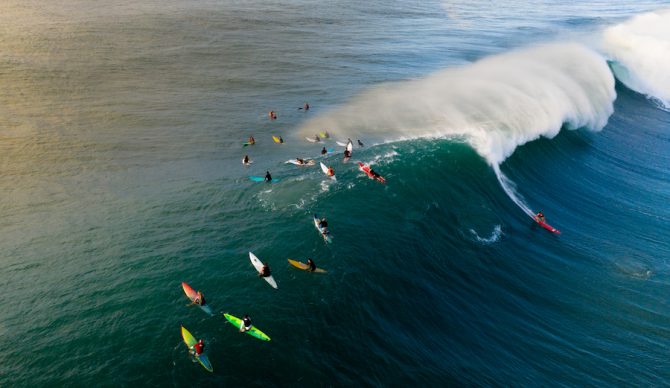 Drone Photography is becoming ever more popular in the surf world. Now, alongside stunning close-ups and down-the-line shots from the water, we’re seeing glorious drawn back shots from above that, in a single word, are breathtaking. Just check out some of the aerial shots that were submitted to The Inertia’s 2021 Film and Photo Challenge a couple months ago. The winning shot (below) from Nick Gruen is certainly a stunner.

Although it may seem simple to capture such imagery, it isn’t. Drone photography requires all the skills of a good photographer such as knowing how to compose a shot, knowledge of light as well as good piloting skills and spatial awareness to keep the drone in the air.

And then, there is the equipment. High-quality drones definitely make the art of drone photography easier, bringing along features such as follow-me software, upgraded cameras with zoom lenses and cinematic modes, as well as stability enhancements for high-wind scenarios. But, such pro-level features come with a pro-level price tag, and you’re not going to be making much use of a zoom lens (for example) while you’re still learning to fly. And furthermore, as pro photographer and Mavericks Surf Awards Drone Operator Abe Alarcon told me, “everyone crashes their first drone.” No reason to drop over $1,000 on a piece of equipment that will end up in a tree – or worse – the bottom of the ocean.

Thankfully, there are some budget-conscious options out there for those looking to get into drone photography, as well as a whole range of options up to (and beyond) $3,000 with more bells and whistles than most pros know what to do with.

I caught up with pro photographers Nick Gruen and Abe Alarcon, both highly proficient drone photographers who have used their piloting skills to capture stunning imagery all over the world. Nick, based on the North Shore of Oahu, was our Aerial category winner for the 2021 Film and Photo Challenge, with his stunning shot of Teahupoo from above.

Teahupoo from above. Photo: Nick Gruen

Abe, based out of Santa Cruz, Calif., has made a name for himself as the “Red Baron of Mavericks” (I just made that up), flying around one of the scariest big waves on the planet to capture stunning imagery and videos of some of the best rides in recent years at the infamous big wave destination.

Here’s the drones Abe and Nick suggested for those getting started, as well as some mid-range options and the drones they use as pros. Along with some advice, of course, because who doesn’t need that.

TLDR: What are the Best Drones for Surf Photography?

Top of the Line Pro

What Factors Make A Difference?

Number one is flight time. That $70 drone on Amazon may seem like a steal, but if it’s only got 15 minutes of flight time, that’s barely enough time to get in the air and look around before coming back to earth. In any case, swappable batteries are a must, even with 30-minute flight times. When Abe is out at Mavericks, he has six batteries on hand, and a portable charger. “Once one battery dies, I put a new one in and throw that one on the charger,” he says. “In theory I could keep flying forever. And I have two controllers as well, because those eventually die too.”

Other considerations include drone range, video resolution (pay attention to the frames per second as well as the fancy 4k, 6k, 8k numbers), warranty (because the truth is you’re going to crash a drone at some point), software features like follow-cam or cinematic mode, and drone speed/wind resistance (both depend on how powerful the rotors are).

At least in the U.S., most drones are going to require a registration of some kind under the FAA. This is relatively simple to achieve, and only costs five dollars, but definitely is worth knowing and doing, so you’re not risking a massive fine. Drones under 250 grams (.55 pounds) don’t require registration, something that DJI was aware of when they designed their Mini line of drones, which weigh a scant 249 grams.

Registration aside, it’s worth noting that laws regarding where you can fly a drone are fairly strict. No Fly Zones in the U.S. include near and above airports, wildlife refuges, military bases, prisons, national parks, and The White House. Privacy laws apply as well – no pointing your drone’s camera at your next-door neighbors sunbathing nude in their backyard.

DJI vs the Rest of the Industry?

This article is about to read like a sponsored article for DJI. It isn’t. They simply make the best drones out there, and have an absolute stranglehold on the drone market. There are a couple other companies that make good equipment, and I’ve done my best to include them, but for the most part we’re just talking DJI. “There are a couple of things that I love about DJI’s drones,” Abe told me. “They’re great because you can actually work on them. The first time I wrecked a drone, I was shooting surfing with it in Santa Cruz – the battery was dying so I brought it in to land on the beach. but right as it landed on the sand and I’m staring at the screen I see a set wave hit the beach, and it soaked the drone. But my friend had told me that maybe distilled water would help to get the salt out, so I went and got some distilled water and started washing my drone in the parking lot. People were so confused, but after I let it sit on rice for two weeks, it actually worked! The gimbal was off, so I replaced that piece, and that’s what actually sold me on DJI, that I could work on my drone and replace parts to keep it running.”

Something else Abe mentioned that stood out to me was the warranty that DJI offers on its drones. If you crash a DJI drone, you can send it back (even in pieces) and for a deductible they’ll send you a new one. The only problem with the warranty is that you need to have the drone, or at least the pieces of it, to send back. If you lose your drone over open water, or are unable to find its final resting place, the warranty is null and void. Definitely something to think about for surf photography. Abe says that’s the main reason why he uses his Mavic 2 instead of his Inspire drone for surf photography. “If [the Inspire] sinks in the ocean I’m out over $3,500 versus $1,300,” he said. 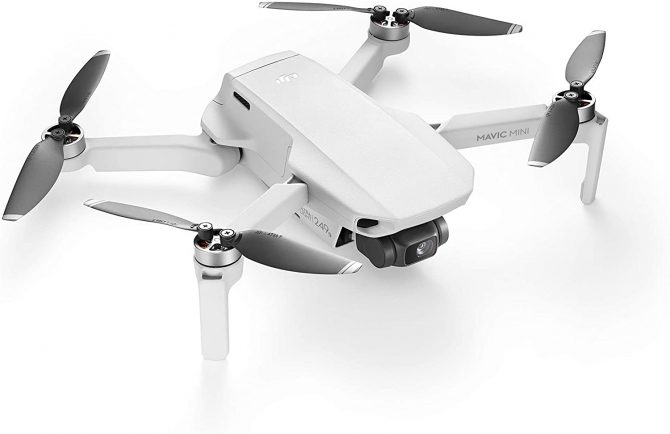 The Mavic Mini is as cheap as you should go when buying a drone. That being said, this little guy still packs a punch. Since being replaced by the Mini 2 (see below), the Mavic Mini brings near-pro level photo/video for just $309 (renewed), an absolute steal. You won’t get all of the new features that the Mini 2 brings such as upgraded software and level 5 wind resistance (the Mavic Mini has level 4) but for more than 25 percent cheaper, you can’t go wrong.

Speaking of absolute steals, it is crazy how close to pro-level the Mini 2 comes while still costing less than $500. Although the camera isn’t as good as the Mavic 2 Pro/Zoom (and at 1/3 of the price I should hope it wouldn’t be), it still shoots 4k/30fps video, which are pro-level numbers. Another awesome feature, already mentioned above is the wind resistance. It has level 5 wind resistance, the same as the Mavic 2 Pro/Zoom. If you want to get started in aerial surf photography, and are willing to pay a bit more than the older Mavic Mini, this is the drone to get.

The Mavic 2 Pro/Zoom (talking about the two of them here because they’re based on the same drone body) is as pro level as you need when shooting surf photography. Like Abe said, you’re risking the full cost of the drone any time you take it out over open water, so the incremental gains in photo/video quality you get when using a higher-end drone like the Inspire series (in his opinion) isn’t worth the financial risk. And at least as far as the drone body goes, you don’t get much better specs than the Mavic 2. A 10km range gets you pretty dang far (that’s 6.2 miles in U.S. terms), and level-five wind resistance means it can withstand wind speeds of 19-24 mph.

One thing that sets the Mavic 2 Pro drone apart from the Zoom is the powerful Hasselblad camera that it’s equipped with: it has a one-inch sensor with a larger ISO range for shooting in lower-light environments.

Abe loves his Mavic 2 Zoom for the ability it has to get close to the subject, without getting too close – pretty important when the subject is a surfer on a 25-60-foot wave at Mavericks. It’s the same drone as the Pro, above, but with a zoom camera instead of the Hasselblad. The Hasselblad performs better at shooting in low light environments, but the ability to zoom in while staying further away is pretty sweet, and helps keep the drone safe. 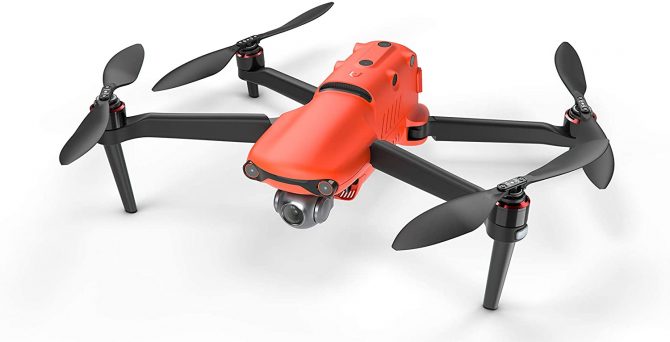 From Abe: “This is the only other drone I would consider besides a DJI.” With stunning 8k video capabilities, and 40 minutes of flight time, this drone (at least on paper) surpasses DJI’s Mavic 2 Pro (the comparable DJI model) in two important respects. However, it doesn’t come with DJI’s awesome warranty (mentioned above). There are plenty of reviews out there comparing the two drones side by side, but it seems like the Autel Evo II does come out on top quite often.

Top of the Line Pro

The DJI Inspire series is as good as it gets when it comes to drones, but they’re not for everyone. First of all, Abe told me that, “you only need an Inspire drone if you’re shooting something cinematic like a high-end movie. For throwing the video up on Instagram, an Inspire just isn’t necessary.” That being said, Nick does use both his Inspire and Mavic when shooting over the water, I guess it just depends on how risky you’re willing to get for that perfect shot.