Billy Kemper on Training, Nutrition, and Mental Toughness for the World’s Biggest Waves 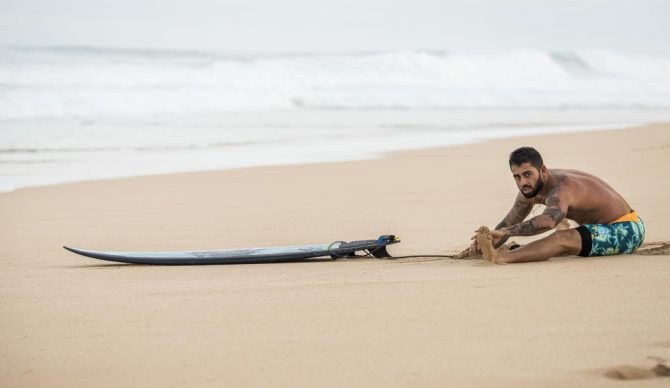 Billy Kemper has earned his place as a dominant force at Jaws. Photo: WSL/Poullenot

Editor’s Note: This feature is part of The Inertia‘s Health and Wellness Spotlight, an initiative that explores emerging trends in nutrition, diet, and fitness in surf and outdoor culture. Unequivocally, excellent health enables more time to fully enjoy the ocean and outdoors. This initiative is powered by our friends at Vivobarefoot.

Maui is essentially a kingmaker in surfing today. It makes sense. Nowhere else can you find bountiful opportunities for air wind off perfect ramps (Ho’okipa) a reasonable drive from pristine barrels (Honolua Bay) and have both leading up to the most perfect XXL wave on the planet (Pe’ahi a.k.a. Jaws). Billy Kemper was raised on this windswept rock before moving full-time to the North Shore of Oahu. Kemper’s relationship with Jaws earned him the title of WSL Big Wave World Champion in 2017/2018, as well as the hometown bragging rights of winning the daunting Pe’ahi Challenge a record three times, in 2015, 2016, and 2018. The Inertia caught up with Kemper to learn more about his approach to health, nutrition, and mental toughness.

The physical training that has supported Billy’s ascent to being a multiple-world-title holder has been an ongoing process that began seven years ago.

“I’ve been working with Kahea Hart since day one — we started with basic CrossFit, and it moved into mobility, speed, agility, pilates stuff, yoga stuff, a bit of everything all the way down to mixed martial arts to boxing to ginastica. Now, in the last year we’ve moved into Foundation Training and also the pool training that Laird Hamilton’s been teaching,” Kemper said.

The basics are simple and effective: find a coach you trust, tailor the workouts to your personal aspirations, and have a blast doing it.

“For me, I’ve created my own formula that suits my surfing and my goals and my dreams. I feel like it benefits me more than any other kind of fitness in the world,” he said. “That being said, having a coach who’s a surfer as good as anyone is a huge part of our success as well. My coach [Kahea Hart] knows what we need to build for my surfing and that’s why we work together. I love doing it and I have a great time while training.”

Kemper turned to a couple revered worldwide for their fitness prowess and nutrition guidance to make sure the food he put in his body was maximizing the rigorous workouts that build a solid foundation for high-intensity wave riding. Matt and Cherie Chan are sought-after fitness gurus who have not only excelled in CrossFit competitions, but also work as coaches for others in training. Billy met Matt through one of his sponsors, Progenex, and the rest is extremely disciplined yet still delicious (and highly effective) history.

“Matt is at the top of the totem pole of any nutritionist in sports,” said Kemper. “He works with the best of the best. He does a macro-nutrient diet where you count your macros and I have a daily restriction. It’s very strict but very rewarding at the same time. It’s the real deal. There’s a lot that I can’t eat, but there’s a lot that I can eat. I feel my energy when I’m training and when I’m eating and working with Kahea Hart and the Chan family I just bring confidence to the table and I feel like nobody can beat me.”

For his other favorite big wave surf snack, Billy keeps it close to home and embraces his roots by infusing, “some poi, some Hawaiian kalo — it’s kind of like a sweet potato filled with power, filled with mana. It makes me perform the way I do.”

You may know this power-packed food as taro, and on top of the actual nutritional benefits it holds (rich in potassium, magnesium, calcium, phosphorous, fiber, folate, antioxidants, and vitamins B, C, and E), it’s a supremely sacred plant in Hawaiian culture. The mana — life-force —in the taro Kemper refers to stems from thousands of years of native Hawaiians tending this plant on Hawaiian lands, teaching the children generation after generation how to pound poi in a traditional practice that goes back to the Islands’ earliest Polynesian arrivals.

As a father of four and an extreme sports athlete traveling the world, Kemper has a lot on his plate. But last year he was hit with the hardest challenge imaginable when his mother reached the end of her battle with cancer. Known to many simply as Auntie Linda, she was a petite woman who beamed with light as she greeted everyone at each contest while she supported Billy, and she sparked a light in everyone she spoke to that she clearly left her on Earth in the form of her son.

Kemper incorporates the memory of his mother in the mental preparation he does before every heat he paddles out in. He began working with a speech coach and a mental preparation coach this year, and together they developed a set of five statements that Billy repeats for mental fortitude. One of them: “I FIGHT LIKE MY MOM, AND WE NEVER GIVE UP.”

“They’re just little personal quotes that fire me up. I wrote those [five lines] down and I listen to them on repeat before I compete,” Kemper said. “I say them with confidence and with the good body language, and it just sets my mind to where a loss isn’t an option. It does the job.”

Kemper has obviously found the magic formula to keep his body running like a well-oiled machine, but to him, true health is genuine happiness. And nothing makes Kemper happier than giving that gift to his family.

“I feel like health has a lot to do with happiness,” Billy said. “So for me just to keep my family smiling is kind of the only goal in life. All this surfing and all these titles and awards are kind of icing on the cake, but as far as every day it’s keeping my family healthy and strong and bringing healthy organic food to the table, and bringing home not only money, but a heart full of joy to spend time with them and make sure my kids will remember me every day of their childhood.”

View more features from The Inertia‘s Health and Wellness Spotlight.