Blue Space: How Being Around Water Can Boost City Dwellers’ Mental Health 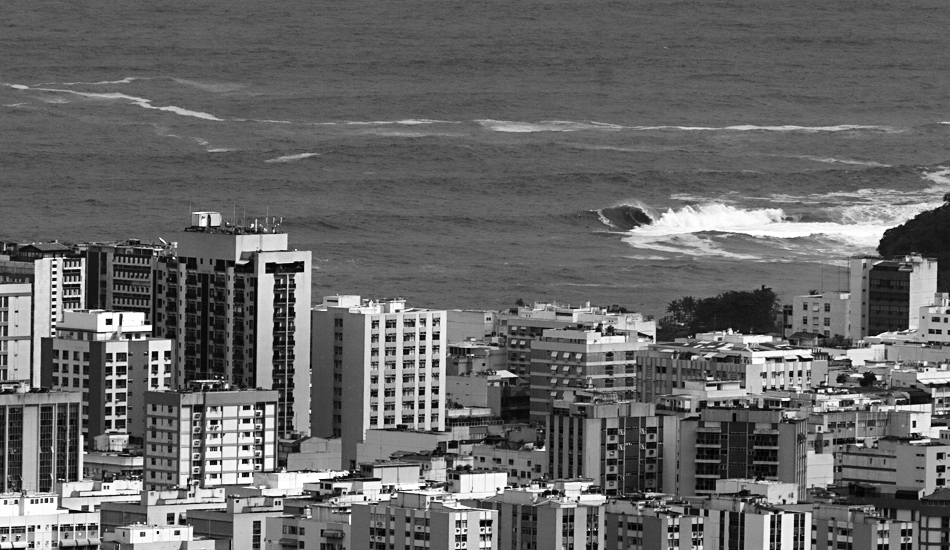 Officials are increasingly recognizing that integrating nature into cities is an effective public health strategy to improve mental health. Doctors around the world now administer “green prescriptions” – where patients are encouraged to spend time in local nature spaces – based on hundreds of studies showing that time in nature can benefit people’s psychological well-being and increase social engagement.

Much of this research to date has focused on the role of green space in improving mental health. But what about “blue” space – water settings such as riverside trails, a lake, a waterfront or even urban fountains?

You probably intuitively know that being close to water can induce feelings of calm. Many poets and artists have attested to the sense of awe and magic that water can evoke. But can it deliver the same wide-ranging benefits that urban green infrastructure brings to mental health? A few studies have shown that water bodies score just as well – if not better – in supporting psychological well-being as compared with “green” nature.

So far the evidence is sparse, though, and mostly limited to coastal settings in Europe. What if you’re in one of the 49 countries in the world, or 27 American states, that are landlocked with no ocean shore? For natural capital to deliver health benefits to people, it needs to be right next to them, integrated into the everyday fabric of their world.

Targeting Everyday Well-Being
If you do have access to blue space, it can make you happier, reduce your stress levels, improve your quality of life and make you more sociable and altruistic.

This was the finding from one study my collaborators and I carried out in West Palm Beach, Florida. A short walk along a downtown waterfront with a design intervention we devised improved both perceived and physiological stress, as measured by heart rate variability.

Our design intervention increased levels of shade and seating along the shoreline to improve comfort levels and incorporated a series of “fascination frames”: translucent picture frames fitted with historic waterfront scenes from the early 20th century that reminded visitors of this place’s aesthetic and cultural history.

This temporary pop-up intervention increased participants’ engagement with the shore, piqued their curiosity (an integral component of well-being), decreased their stress levels and increased their subjective well-being. And the people exposed to our intervention were more likely to report higher levels of altruism and feelings of belonging.

Researchers believe these kinds of health benefits arise through a number of pathways. There might a direct benefit, for example, from water’s ability to reduce heat stress in a hot climate – the way fountains cooled areas in 13th century Islamic Spain. Water can help reduce traffic noise, and so lessen the stress caused by a loud cityscape. Researchers also report a direct effect on stress regulation, finding that contact with nature slows down the human stress response and induces calm. 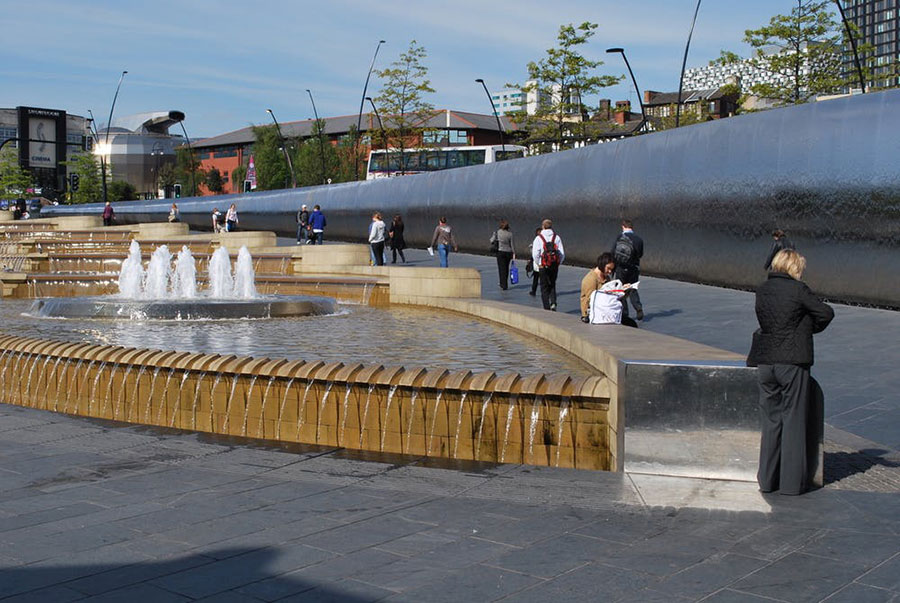 People tend to be more physically active in environments where there is access to water, and you’re more likely to meet people there, either on an impromptu basis or for organized activities. Researchers think that the soft visual stimuli of water – the patterns of light falling on it as it flows – holds our attention without any conscious effort and allows recovery from cognitive fatigue, providing scope for reflection. This idea, called Attention Restoration Theory, argues that fascination in the natural environment – in this context, the curiosity and wonder that water sparks – is a critical environmental cue in the process of psychological restoration.

My colleagues and I are now using electroencephalography to explore the neural signatures of different urban settings in people’s brains and to identify whether immersive blue-space environments – including smaller water features such as rain gardens – can offer similar benefits to psychological well-being as our green space research has shown. 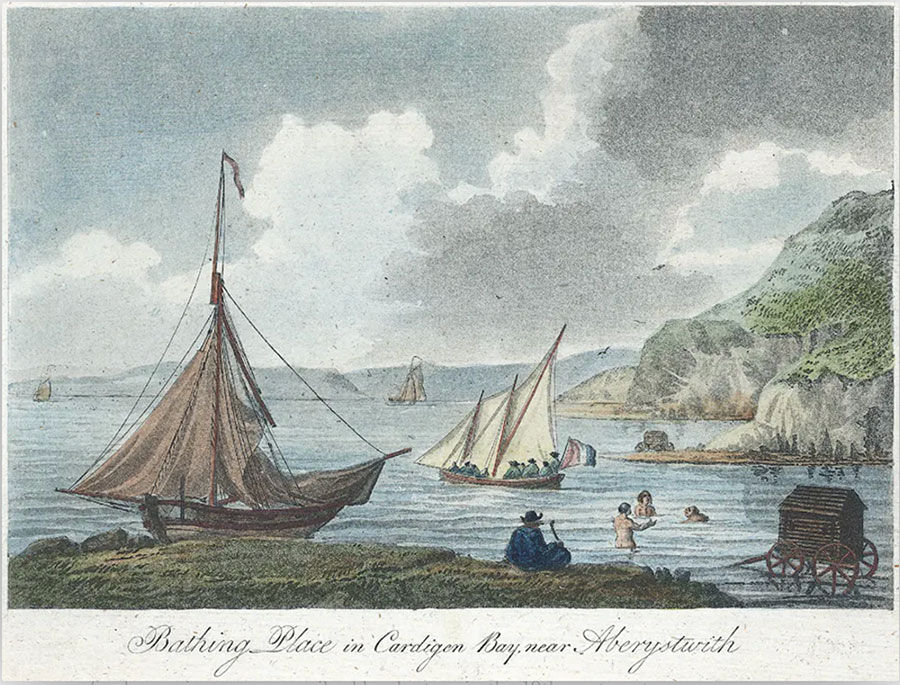 Bathing place in Cardigan Bay, near Aberystwith, circa 1800. Photo: National Library of Wales, CC BY

Targeting Health Problems Via “Blue Care”
The idea of water as a curing agent is not a new one. Fans of Jane Austen’s “Sanditon” will appreciate how sea bathing – and the fresh sea air – was prescribed by doctors in the 19th century to treat a range of maladies ranging from melancholy to heat stress. The popularity of English seaside resorts spread until the 1850s, when the trend for cold water submergence ended.

Today, hydrotherapy is still used to support recovery from physical injury and as a means of pain relief. But the application of “blue care” for psychological well-being and physical health has been somewhat forgotten.

A recent research review identified only 33 studies where blue care interventions, such as a beach activity, swimming, sailing, fishing or canoeing, were used to treat individuals with specific mental health problems – including PTSD, addiction and depression – and people with physical disabilities. Overall, these studies found that blue care interventions delivered direct benefits for health, especially mental health and social well-being.

Despite the 19th century belief, water therapy cannot cure mental health problems. However, it does have a potential role in alleviating some of the symptoms of anxiety and depression.

Piggybacking On Other Water Goals
But, again, there is little evidence for all these blue health benefits beyond coastal settings. How might these approaches be developed in inland cities? How can urban planners better integrate access to water into people’s lives, no matter where they’re located?

My colleagues and I are eyeing what planners call the water-centric city, or “sponge city.” It’s a key strategy in climate change adaptation and in managing water resources in a sustainable and resilient way.

Cities are experimenting with new ways to deal with stormwater that combine hard and soft engineered systems for the capture, diversion, infiltration, cleansing, and retention of stormwater. This includes rain gardens and exposed water channels that capture rainfall; at the same time, they add a softer layer to the street by incorporating perennial plants and grasses. Innovations like these invite people to linger in the streets, enjoy the water and be sociable.

Led by the University of Washington, a team of researchers and I have advanced a new framework to help city planners and policymakers measure the mental health effects of adding – or taking away – nature in their city plans, with the goal of integrating nature into the public health agendas of future cities.

Understanding the impacts of both green and blue spaces can encourage cities to approach blue design in an innovative way. Including a wide range of interactive and passive water features – which also serve to manage stormwater – within our cities can increase opportunities for play, curiosity, animation and stress alleviation.

Blue urban design – alongside green – may well be an agent for promoting mental health and not just an amenity.