Danny Davis on Falling in Love With the Mountains Through Splitboarding 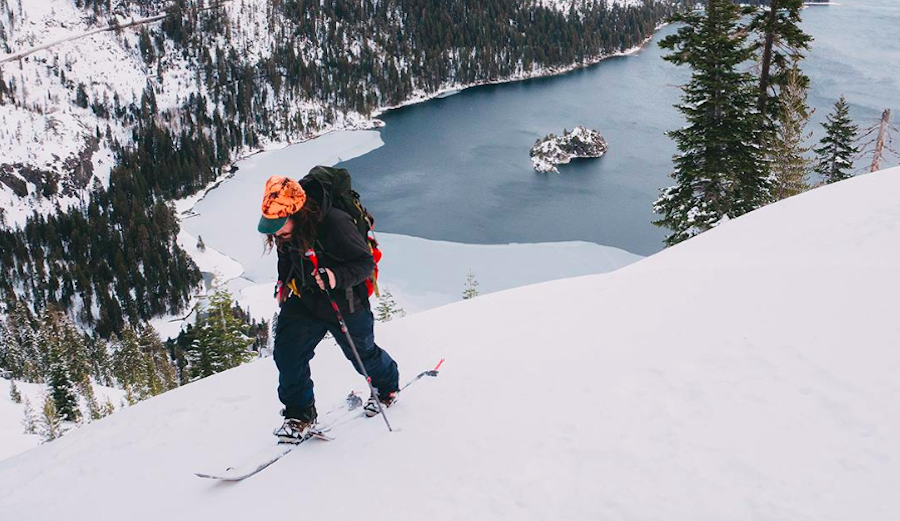 Temperatures are in the low forties in Vail, Colorado. Clouds begin to blow through, stealing away the bright sun from the morning and the action on the mountain at the 2019 Burton US Open of Snowboarding steadily begins to spill into the bars of the lodges for the aprés. Danny Davis is kind enough to find a quiet room to sit down with us and answer a few questions as the inviting hum carries on in the distance.

Davis is one of snowboarding’s brightest characters. His competitive achievements in halfpipe are well-documented. And his other creative outlets, namely Peace Park and Frendly Gathering, have exploded in popularity since they first began. As we chat with Davis, though, the conversation quickly veers into a budding interest of his: freeriding, and more specifically accessing backcountry terrain on a splitboard. Last year, our own Joe Carberry had the pleasure of riding with Davis, Nick Russell, Jeremy Jones, and Ian Walsh in Tahoe, and now to hear the man put the origins of his newfound interest in his own words is inspiring. So contagious is his love for the mountains, we wanted to share his words with you below. Keep an eye out for the full interview coming soon. And tune in to the Burton US Open here.

I’ve always been into freeriding. When I was 18 years old, I was on a thing called uninc at Burton and those guys were really the first ones that got me out into the backcountry. And it was sweet because it was just like, “Here you are. Come on a heli trip. You’re gonna learn a lot and you’re gonna have to grow some balls.” And so that was the beginning of it really falling in love with freeriding – watching those guys, failing miserably, you know, at getting shots. Blowing it left and right. Getting into the middle of a line and tumbling down it, and coming out and those guys going, “Yo, you just got really lucky.”

So, that side of it I really like. The reading of the line. Where am I gonna push my slough? How do I wanna do my turn that’s good for photos and video but also helps me make it down this thing safely?

It’s a whole different ball game than what I grew up doing which was competing. And competing is its own beast. It’s its own line to figure out, you know? How you deal with the pressure. What tricks to do in qualifiers and what to save for finals.

I’ve really been kind of tapping into splitboarding because, well, my roommate Nick [Russell] has been getting me into it. He’s a big splitboarder. Big walker. And a lot of stuff you can walk. It’s right there right off the road. You look at it every day, and you’re like, “Oh, we can’t snowmobile there.” But you put a splitboard on you and can be up there in an hour.

It really hurt my mentality for a while being like, “I’m gonna go out and spend eight hours on my feet and get three runs.” That tripped me out. But, now that I’ve been so immersed in splitboarding I’m really getting used to it. I’m really finding the efficiency of it and what we can ride where other people don’t really go. Exploring some mysty zones and it’s really just kind of what I’m into right now, you know?

I like riding lines and I’m falling in love more with just the mountains. I fell in love with snowboarding because I was a little competitor. I was good at it. I could do backflips. And I got good at it at a young age.

But, freeriding and that part of snowboarding is kind of a different pleasure of snowboarding. The whole contest side of things is, “Hey, you’re good. Here are some points and here’s some money. You did well. Come to the next contest. Okay, you did well again. You’re good. Tricks are lookin’ cool!” And you get all this affirmation that you’re killing it.

But, freeriding is so different. Nobody’s even seeing it a lot of the time. You ride a sick line and your buddy’s at the bottom and he’s the only one who’s like, “That was insane!” And you high five.

And I’m not good at [freeriding]. I think that’s what’s sucking me in is I have yet to really master it. Not that you ever really master halfpipe riding or slopestyle riding or that I’ll ever master freeriding, but I’m gonna try.