The Day the Music Died (For Me) 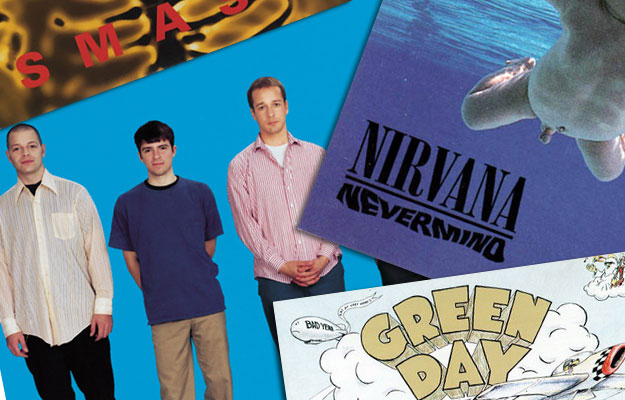 I’m a product of the ’90s. The New Kids were the shit for a while when I was a kid. I had one of their t-shirts. I didn’t like it, but I still had it. I watched the A-team and MacGyver (the first two seasons are staring at me right now from their DVD cases) and hauled ass back from school to watch Ducktales and Darkwing Duck. Saturday mornings I’d get up early to watch Zack Morris make out with Kelly Kapowski while unseen spectators hooted from the sidelines. I listened to Soundgarden when Chris Cornell still had a voice, Pearl Jam before they made the same song over and over again, and Nirvana before Kurt Cobain “killed himself.” Conspiracy theories aside, what in God’s name happened to music in the last 10 years? So in classic High Fidelity format, I present:

The Top Three Albums of my Life:

What do those three bands have in common now? They all suck. A lot. I was listening to the radio yesterday, and the DJ announced she was going to play a new song by Weezer. I’m still not entirely convinced that Weezer has made the transition from best band ever to horrible teeny-bopper, shit-shoveling, moneymakers, so my ears perk up when I hear they’ve come out with something new. Considering that Weezer has consistently been making shittier and shittier albums since the Green Album, you’d think I’d have lost all faith entirely. But no, like Mulder, I wanted to believe. I wanted to believe that one day Weezer will announce that the terrible music they’ve been making is all just a big joke – one with a punchline along the lines of “you morons will buy ANYTHING”. But I’m starting to really doubt that now. Cue DJ pressing play. Cue me turning the volume up, with the hope lightening my eyes like one of those kids on the Christian Life commercials. At first I thought the radio station screwed up and played the wrong song. But that voice…

OH MY GOD, it’s THEM. What the FUCK is going on here? I’m your Daddy? Really, Rivers? Hey, remember The Sweater song? El Scorcho? PINK TRIANGLE!? What is this garbage I hear spewing forth from my speakers? Did Weezer turn into a bunch of 12-year-old girls (not that there’s anything wrong with 12-year-old girls…we just have different musical tastes) with Barbies rammed into their ears? Because that’s what this sounds like. I had to convince myself it was better to turn the radio off than to swerve into oncoming traffic. God damn, Weezer, have some respect for yourselves. Your name was Jonas.

On to Green Day. Christie Road was stuck in my head for a good two years. The next three years it turned into Longview. Those were a good five years. For three power chords and some glue sniffing punk rockers, those guys made great music. Then they stopped sniffing Whiteout at parties and started wearing man-scara. Effectively ending another great band –but skyrocketing them into the stratosphere of mainstream music. Make a couple of songs about war, look up towards the sky in your videos, man-scara running off your eyelids like the talent pouring into the gutter. What happened to She? Where did the guy go that wrote Basket Case? How did that turn into the weird synth crap that is American Idiot? If I could give one piece of advice to Billie Joe, it would be to stick the aerosol can back up your nose and sit down with a guitar again.Look at Rancid! They kill it, they’re huge, and they still play the music that got them to where they are. Go back, Billie. Please.

Then there’s the Offspring. Ah, the Offspring. The worst offenders of my list. Yeah, they were good once. They were really good. And then Pretty Fly for a White Guy ruined everything. You wrote Come out and Play! Smash was the best selling independent record of all time! Why would you do this?! It physically hurts me. I take it as a personal insult. The Offspring is so terrible now that I don’t even want to think about it. I have nothing important to say, except this: Youstupidgoddamndumbshitmotherfucker. That blew my face off in grade 6. I thought it was the coolest thing ever.

So all this begs the question: is it my taste in music that’s changing, or the music itself? Because one thing I notice is that the demographic that these bands are playing to is the same one I was in when I really got into these guys. I can’t believe my taste in music has changed that much. I know it hasn’t. I still whistle that epic three-minute instrumental at the end of Only in Dreams. I still wonder why Billie Joe sang “I went to a whore HE said my life’s a bore.” And I still gets insanely excited when I hear Self Esteem. I honestly believe that the more you suffer, the more it shows you really care, and I will always want a girl who laughs for no one else.

It’s them, not me. They shaped my musical tastes, and now they’ve taken me to the dump, throwing me unceremoniously into the kitchen waste section among the eggshells and banana peels. They’ve done that without even leaving some kind of legacy for me to listen to. I’m stuck in the mid ’90s, hoping against all odds they’ll go back to the really, REALLY awesome bands they once were.

Are they just pandering to the masses? When they get picked up, do their labels tell them what age group they’re shooting for, no matter how long the band is in existence for?

This sucks. What I’m about to say is something I never thought I’d hear come out of my mouth.

Kids these days don’t understand what good music is.