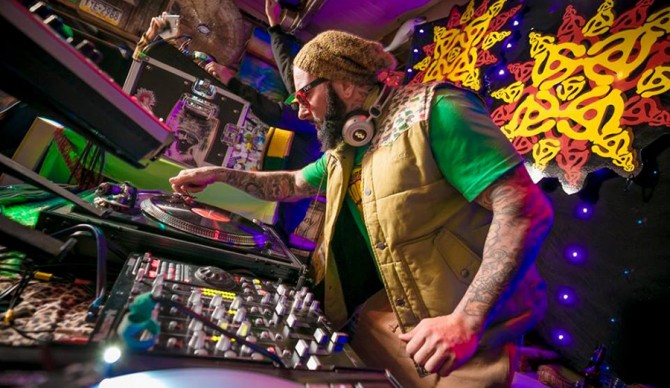 When it comes to DJing, Mark Longenecker says vinyl is here to stay.
Photo by Dominic Agostini

What do the sound of rolling surf, the hum of a tattoo machine and the righteous rhythms of reggae music have in common? Everything, says Mark Longenecker, owner of Endless Summer Tattoo in Cocoa Beach, FL.  “If you love to surf, then you want to live at the beach. Beach people love reggae. It all goes hand in hand.”

Widely known in the tattoo industry for incorporating all the aforementioned islands-inspired, saltwater-infused elements into his original pieces — be the canvas human, a brick wall, or a fiberglass twin fin — Longenecker truly embodies a term that best describes his work and studio, something he calls “tropistyle.”

Longenecker has dedicated more than 20 years of his life to the craft of tattooing, which has earned him a jaw-dropping portfolio, praise from peers worldwide, non-stop bookings, and even a final four finish on Season 5 of Spike TV’s reality show InkMaster.

Equally, if not more impressive though is the amount of time and creative energy spent (parallel to his tattoo endeavors) honing his skills as a musician and DJ. Admittedly skeptical of DJing and its legitimacy while leading his own band in college, Longenecker’s eyes were opened during a party where he got his first up-close look at how much talent and technique is needed behind turntables and a microphone. From that point, his musical perspective turned in a new direction. “As a DJ, I transitioned from spinning techno, to breaks, to drum and base and then finally to reggae music. You can never grow too old for reggae, and I will spin it until I die.”

Akin to his signature style of tattooing and drawing, “MC Longneck” has developed a vibe definitively his own. It’s apparent to those who see him spin regularly during Jamaikin Me Crazy parties at Mambos in Cocoa Beach. “I pride myself in my selections,” he says. “That’s why most reggae DJs refer to themselves as ‘selectors.’ It’s all about the hunt to find those rare gems, new tunes and sick remixes. Putting all that together at the right time is what makes me the DJ I am.”

When asked about his musical stye influences, Longenecker lists several. “As far as DJs, Diplo is a genius. Locally, I have always looked up to Lance O from Kulcha Shok Muzik. I love listening to Chronixx and Protoje and believe they are the future of reggae music.”

However, when it comes to which artist he’d feature on his dream playlist, Longenecker was emphatic in his answer: Buju Banton. “He is my No. 1. Any album from him is amazing.”

Similar to learning tattooing etiquette and different techniques from mentors, Longenecker had to earn his mix master chops on stage. “Once I dedicated my DJ career to reggae, I ended up getting to open for some major reggae acts like Yellowman, Collie Buddz, Eek-a-Mouse and Toots and the Maytals. I would do my best to pump up the crowd. But, the next thing I know, the band would be doing a sound check over my music. At many of these events, I would end up feeling like filler; just some slight entertainment to pass the time between bands. So I got inspired to host a party that makes DJs the stars of the show again.”

Enter “Dub Massive.” Each January, those around Central Florida look forward to a signature get-together that Longenecker says harkens back to old-school raves where DJs rule the roost. In addition to an evening of thumping beats from a progressive lineup of local spin doctors, Dub Massive has evolved into something much bigger.

“I started Dub massive strictly as a party to celebrate reggae music and the DJs. One of the DJs, Jack Hoffpauir from the New School Dropouts, ended up passing away. He used to raise money for the suicide hotline with his events. I ended up making my party a charity benefit. The benefactor changed to the Sea Turtle Preservation Society and then finally to Surfers for Autism (SFA). After I worked with SFA the first time, I saw immediate results with the kids. I now work exclusively with them,” he says.

The recently completed Dub Massive 2016 did not disappoint. Another large turnout came to celebrate a good time for a good cause. During the festivities, a custom hand-painted surfboard by Longenecker, featuring an ode to his reggae muse Buju Banton, was raffled off among attendees. All proceeds went to SFA. 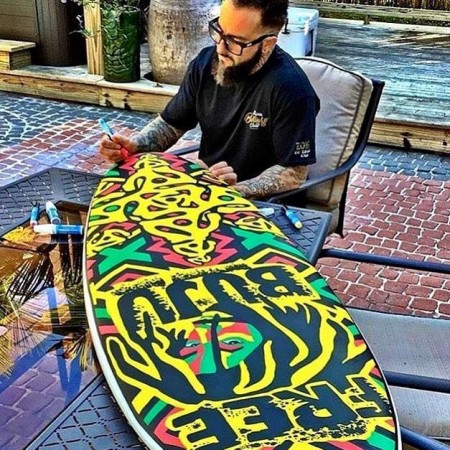 Unique to this year’s Dub Massive was the event’s theme: “Vinyl Revival.”  According to Longenecker, records are making a comeback as major tools of the trade for DJs worldwide. “Vinyl is bigger than ever right now,” he says. “People are buying record players again and collecting records like the old days. I think the excitement of digital downloads has worn off. You can’t pick up a digital download, open it and enjoy the artwork like you can with vinyl. It’s something real that you can hold, and it just sounds real when you put that needle in the record.”

It’s obvious how stoked Longenecker is on all his creative outlets. His work speaks for itself, whether in his tattoo studio, cruising waves, or atop a DJ platform. And it doesn’t appear his desire to appeal to people’s senses will subside anytime soon.

“I can practice a DJ set over and over and then switch it all up in the moment I am spinning because I feel that is the new direction the vibes need to go,” he says. “I really try to understand and know the words of every song I play. I want the crowd to know the meanings and messages of those songs as I take them on my musical journey.”