Interview: Joe Principe of Rise Against 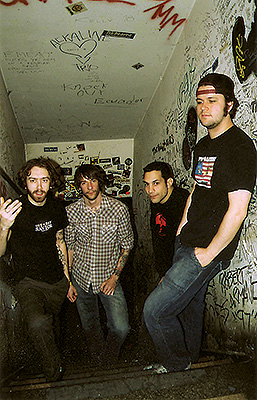 A portrait of the band. Photo courtesy of Fat Wreck Chords

At the time we started the band, there were so many doom-and-gloom-bands starting. There were a lot of goth-themed punk bands and we appreciated it. Our friends do that stuff really well. But we just wanted something that had some positivity to it, that inspired change for the better. That’s why when we started this band, it was very intentional, but unspoken, that we would do this band in a way that our influences did their bands–like 7 seconds and Minor Threat–they were very inspiring. It’s like we were carrying that torch.

Speaking of Minor Threat, I know that most of the guys in the band are straight edge. Tell me about your decision to pursue that lifestyle.

I think that’s a decision that everybody needs to make for themselves. When I was growing up, there were a lot of people getting into it with kind of a gang mentality. It’s like they were doing it more to be a part of a group. For me, it was a personal choice. I guess I was pre-wired in a way where it just wasn’t for me. That’s the right reason to be “straight edge.” The [straight edge] label was kind of like whatever. It’s taken a little bit out of context actually if you read the lyrics to [Minor Threat’s] song “Out of Step” or “Straight Edge.” But I think over the years, it just kind of formed into this thing that it wasn’t mean to be. It’s the “gang effect” (laughs).

Have you ever met Ian Mackaye?

Yeah, he’s a very awesome person. When we were on tour with Bad Religion, [Bad Religion and former Minor Threat guitarist] Brian Baker took us to the Dischord Records house and Ian made it a point to be there to meet us. That house still looks exactly the same as it does on the cover of that Minor Threat record. [Ian] still has every demo he’s ever gotten tucked away. It’s amazing. We went to the basement where Minor Threat got to practice and he’s just a very genuine person. When you accomplish that much, it’s sometimes unavoidable for it to affect the way you act. I don’t mean that I would expect him to be arrogant, but it’s just hard to maintain a sense of normalcy when you have that much on your shoulders and everyone credits you with starting this crazy movement that you never intended to start. But yeah, he’s a very down to earth guy and definitely one of the highlights of me playing in Rise Against was meeting him.

You mentioned Bad Religion, who you’ve toured with several times. I watched you on tour with those guys in 2004 along with another punk band, From First to Last, whose singer Sonny Moore has obviously become a giant in the EDM space under the Skrillex moniker.  Are you a fan of EDM? Looking back now, was Sonny’s transition from a screaming frontman to an EDM megastar a surprise?

I’m not a fan of that genre, but I do respect Sonny. He was definitely the creative force behind From First to Last. He was 16-years-old on that tour and he always had these crazy visions of song ideas that he was working on backstage. I would always pay attention to him because he would always have a guitar in his hand and he always had GarageBand [software] open on his laptop. So it doesn’t surprise me that he went [the EDM] direction and that he’s successful at it. I respect him because some of the guys in Rise Against went to this party where he was performing and he actually stopped the show and said something to everyone like, “Put your phones down and enjoy the moment!” I always thought that was so cool of him to say because a lot of people are missing out on what’s actually happening because they’re too busy filming what’s going on. I mean, I see the pros and cons of that, but yeah, I respect him. He still comes from a very punk rock attitude and I love that about him.

Do you still get nervous before you play?

It depends on the show. I think this festival that we have in Detroit, Orion Fest, we’re playing with the Red Hot Chili Peppers and although I’m not like an enormous Chili Peppers fan, I obviously respect Flea for his bass playing and what he’s accomplished. It’s pretty nerve-wracking to play in front of somebody like him.

You play Fender basses exclusively. Was this the case even before you got a sponsorship from them?

Yeah. The very first bass I had was a knockoff of Fender. It was from a company called Memphis. It was a jazz bass but it was just a cheap knockoff. That was given to me because, well, originally I played guitar. I played guitar for like a year and then a friend of mine asked me to start playing bass in his band. It just became supernatural and I just kind of had the ear for it and I liked it better. The first bass I actually bought with my own money was a Fender jazz bass. I just fell in love with it. It was like $400 for this used ’70s jazz bass. Over the years, I switched to a P-Bass just to kind of have a beefier tone. But yeah, it’s always been Fender. They’re just really comfortable for me. I’ve tried a Rickenbacker here or there or a Music Man, but the pickups are always in the way of where I pick, so…

You’ve been influenced by many bassists including Matt Freeman of Rancid. What is the biggest thing you have learned from him as a musician? If Rancid ever needed someone to fill in for him at a show, what song of theirs would you be most excited to play?

Man, I would love to play “Rejected” off their first record if I could pull it off–you know, if I practiced a little bit (laughs). That song kind of has a special place in my heart. When I first heard Rancid, it always just stuck out to me. But yeah, what I’ve learned from Matt is that he uses his thumb to fret strings as a shortcut. I never thought about doing that until I toured with him and I was like, “wow.” It’s such an easy thing to do and you can kind of open up the way you chord that stuff so sometimes I do that.

How would you say your bass playing style has changed from albums like The Unraveling and Revolutions per Minute to more recent ones like Endgame?

I think I’ve toned it down a little bit. I’ve realized that you don’t have to go crazy all the time. I respect bass players that can do that, but for what we do now as a band with bigger rock songs, sometimes the bass can get in the way or take away from the intent of a chorus or something. So yeah, I try to step back a little bit and play for the song, not for myself, you know?