Can We Learn Sperm Whale Language? Researchers Are Using Artificial Intelligence to Find Out 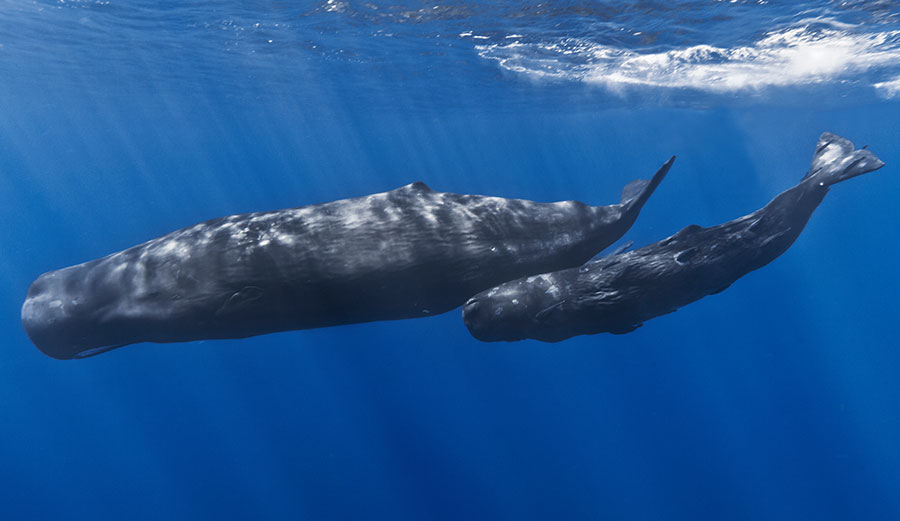 A mother sperm whale and her calf off the coast of Mauritius. Will we be able to understand them in the future? Photo: Wikimedia Commons

If you’ve ever been lucky enough to spend time underwater in an area with whales, you’ve likely heard them. They’re curious sounds; clicks and squeals and deep, melancholy rumbles penetrating through incredible distances. They often sound close, just out of your field of vision, and it’s easy to imagine some great creature slowly moving by in the dark blue. It’s more likely, however, that they are much farther away than that, because whale songs can, by some estimates, travel as far as 10,000 miles. It’s beyond doubt that the noises are used to communicate with other whales, but is it an actual language? Well, researchers are using artificial intelligence to try and break the code of sperm whale communications.

Sperm whales are among the loudest creatures on Earth. Their songs are called codas, and they’re extraordinarily complex. Codas might even be complex enough to count as an actual language, but so far, humans haven’t been able to understand what they might be saying to each other.

Sperm whales have enormous brains. Six times larger than ours, in fact. But bigger doesn’t necessarily mean smarter. The complexity of the brain and the brain-t0-body size ratio likely have more to do with intelligence than plain old size. Humans, despite the fact that we’re considered to be the most highly-evolved species in the world, don’t win either of those categories. The common tree shrew wins brain-t0-body size ratio and the complexity contest is a bit of a hard one to accurately measure — but dolphins, octopuses, some whales, and elephants have more complex brains than we do. And whale songs are a good indicator of that.

According to a recent study by the Cetacean Translation Initiative (CETI) called “A Roadmap to Deciphering the Communication of Sperm Whales,” the complexity and duration of whale vocalizations suggest that they are at least in principle capable of exhibiting a more complex grammar.”

The past decade or so has been a big one for AI, especially when it comes to machines learning for human languages. Right now, machines are capable of taking dense collections of data and deciphering aspects of syntax and semantics, as well as sentence structure and word meaning. In short, machines can learn languages just by “listening” to them — much like we can.

Which is why, as you’ve guessed by now, researchers are in the process of collecting as many different whale sounds as they can gather. The plan, put simply, is to feed all those sounds into a machine and see whether AI can make any sense of them. CETI chose sperm whales because their clicks can sound weirdly similar to morse code, so the AI might have an easier time analyzing them.

The clicking isn’t just for communication, though. Since sperm whales are capable of hunting at depths of up to 4,000 feet, they also use them as a form of echolocation. It has been noted, however, that the echolocation clicks are noticeably different than the communication clicks, which are much closer together.

So far, according to Live Science, the CETI team has about 100,000 different sperm whale clicks on file. That might sound like a lot, but they estimate that the AI will need somewhere around four billion of them. To get to that number, CETI is setting up microphones in the sperm whale haunts all over the world, microphone-carrying drones, and swimming robots that can follow pods of whales as they click their way through the sea.

Even if CETI is able to collect enough data, there’s no guarantee that the machines will be able to parse out a language. That, however, is part of the fun for the researchers — and if it works, they’re hoping it can be applied to other animals as well.

“Sperm whales, in particular,” they wrote, “with their highly developed neuroanatomical features, cognitive abilities, social structures, and discrete, click-based encoding make for an excellent starting point for advanced machine learning tools that can be applied to other animals in the future.”

For now, we’ll have to just try and imagine what animals might be saying to each other — but the question that still lingers is this: if you could talk to animals, would you want to know what they’re saying?