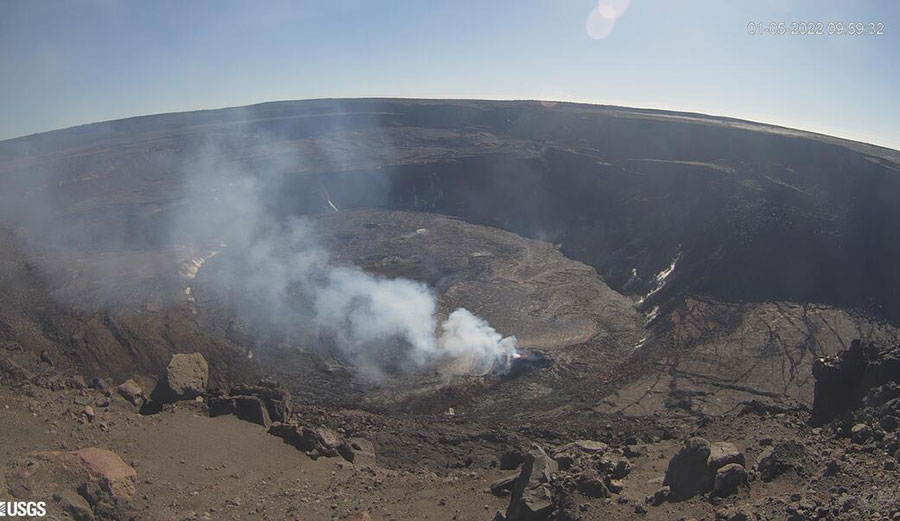 The view from the west rim of the summit collapse features. Photo: USGS/Public Domain

According to reports, a man is dead after he fell into Hawaii’s Kilauea Volcano on January 2. “A 75-year-old Hilo man died after falling from a closed area within Hawaiʻi Volcanoes National Park late Sunday night,” the National Park Service said in a statement on Monday.

The man was reported as missing in the park by his family just after midnight on Sunday. Rangers from the National Park Service along with Hawaii County firefighters searched in the darkness for him. They eventually located his body 100 feet below the crater rim, just west of the Uēkahuna viewing area at the summit of Kīlauea. At approximately 8 a.m. the following morning, they were able to recover the man’s body with a helicopter.

As of this writing, the man’s identity has not been released and no additional details about his death have been made available. The Park Service is investigating.

In 2018, the U.S. Geological Survey labeled Kīlauea as the country’s most dangerous volcano, largely in part to the massive increase in volcanic activity. Kīlauea has been erupting since 1983. In 2008, a lava lake formed at the summit crater. It’s a relatively rare volcanic feature that is caused by a regular replenishment of fresh magma from below, and has become a tourist attraction.

In 2019, a 32-year-old man fell 70 feet into the volcano and miraculously survived. According to a statement by the National Park Service after the 2019 incident, “the man had just climbed over a permanent metal railing at the Steaming Bluff overlook to get closer to the cliff edge,” when he slipped and fell from a 300-foot cliff.