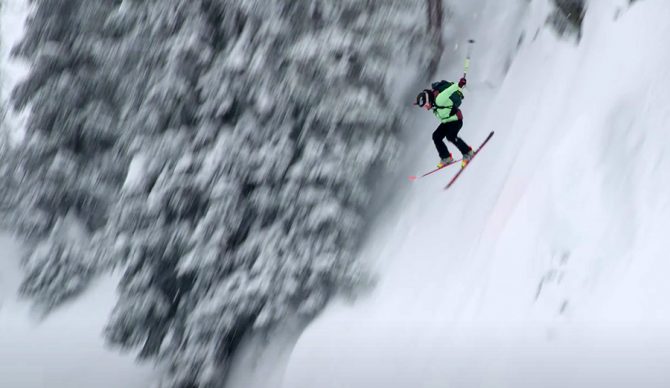 A still from the trailer of Nexus, the first ski film entirely made by women. Photo: Arc’teryx

In the new ski documentary Nexus, women don’t just appear in front of the camera pulling ridiculous aerial stunts — they’re also the ones behind it.

Sponsors dropped the trailer last month, with plans to release the documentary this fall, though no specific tour dates have been announced yet.

Michelle Parker started breaking barriers for women skiers 20 years ago and she joins an ensemble cast of the sport’s new generation of badasses. That includes Brooklyn Bell, Caite Zeliff and Veronica Paulsen. But the film also showcases women juggling the ski life with jobs in healthcare, and a couple of young Vietnamese newcomers creating new spaces for women and underrepresented athletes.

The film separates into into five segments, each following a female skiing duo. During production, the filmmakers kept hearing the same thing from the skiers: “It’s special to be out here with so many women.”

“For many of us, this was the first experience of its kind,” the film’s website states. “The overwhelming majority of cinematographers, photographers, and editors working on Nexus are female. Who better to tell women’s stories than female creatives?”

In the world of outdoor sports, Parker knows as well as anyone. She’s been pushing the boundaries for years as a skier, and then as a mountain biker. While some other films like Pretty Faces and The Approach Film have expanded representation for women athletes, Parker said Nexus is special.

“In my 20-year career, I never thought I would see the day that I was out in the mountains filming for a project with all women behind the lens, directing, producing, the whole nine yards,” Parker wrote on Facebook last month. “The creators of Nexus were up against the odds and I cannot wait to see the full-length film. Such a special and memorable project.”

Behind the camera, Shannon Corsi takes the lead as director and executive producer. Sophie Danison and Katie Lozancich work as photographers and producers.

“There aren’t enough words to describe how excited I am to finally share this!” Corsi wrote on Instagram. “@nxusfilm is a project I’ve been working on for two years — a feature length ski film that follows five pairs of athletes and showcases the very different ways that skiing has impacted the trajectory of their lives.”

Check out the trailer, below: