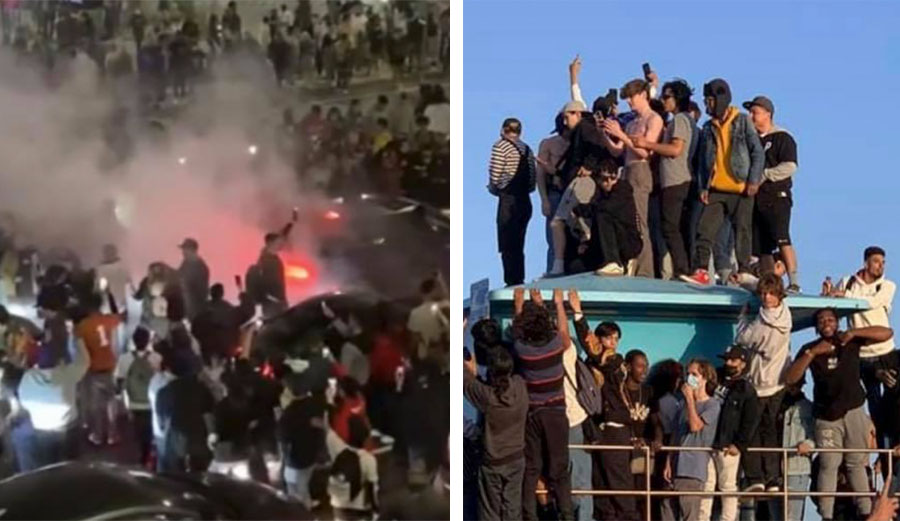 “Adrian’s Kickback” turned went from a party to a riot. Images: Facebook/Rockin’ Fig

Sometime last week, a man posted a TikTok video inviting people to his birthday party in Huntington Beach on Saturday, home of course to the U.S. Open and a good portion of the surf industry. The video gained steam and by Friday, officials were aware that they might be facing a party of epic proportions. Within a few hours, by Saturday evening, the party turned into a riot with thousands in attendance. A riot in Huntington Beach is something that HB police are probably a little more used to than they’d like to admit.

According to reports, at least 2,500 people came to “Adrian’s Kickback,” as the party was known. It got so big that officials were issued an emergency overnight curfew. At 7:13 p.m., they declared an unlawful assembly in the downtown area and put the curfew in effect at 11:30 p.m. Still, tear-gas was needed to disperse the revelers. In the end, some 150 people were arrested.

“You had children running in all different directions, and they just started tagging everything,” Mark Matters, the owner of HQ Gastropub, told the Los Angeles Times. “They tagged the whole front of my place. The tear gas, you could smell it going into our place, just underneath the doors. We closed our windows, we locked our front doors, and we had everyone go out the back.”

Matters wasn’t the only business owner who had his storefront tagged. Rick Fignetti, who owns Huntington Beach’s Rockin’ Fig Surf Shop, also dealt with graffiti. He, however, has images of the person responsible. “Well,” he wrote on Facebook, “never a dull moment in HB. An out of control TikTok party turns into a riot with the downtown and my shop getting graffitied! By the way the guy with black hoodie did it!”

According reports, partiers were throwing bottles, rocks, and fireworks at police. Over 150 officers were eventually called to the scene from nearly every agency in Orange County. They were, at least, standing by after police were made aware of Adrian’s Kickback party that started to gain steam on social media earlier in the week.

Of the people arrested, 121 were adults. Twenty-eight were juveniles. They will reportedly face charges of vandalism, failure to disperse, curfew violations and fireworks offenses. Thankfully, no real injuries were reported.

Huntington Beach, of course, is well-known for its riotous history. In the 1980s and ‘90s, the OP Pro was the scene of wild riots — most notably the ’86 Op Pro, where police cars were lit on fire and local businesses were looted.

The curfew was lifted at 5:30 a.m. on Sunday morning, and a few hours later, some members of the community turned up to begin cleaning up the mess the raucous partiers made to celebrate a stranger’s birthday.