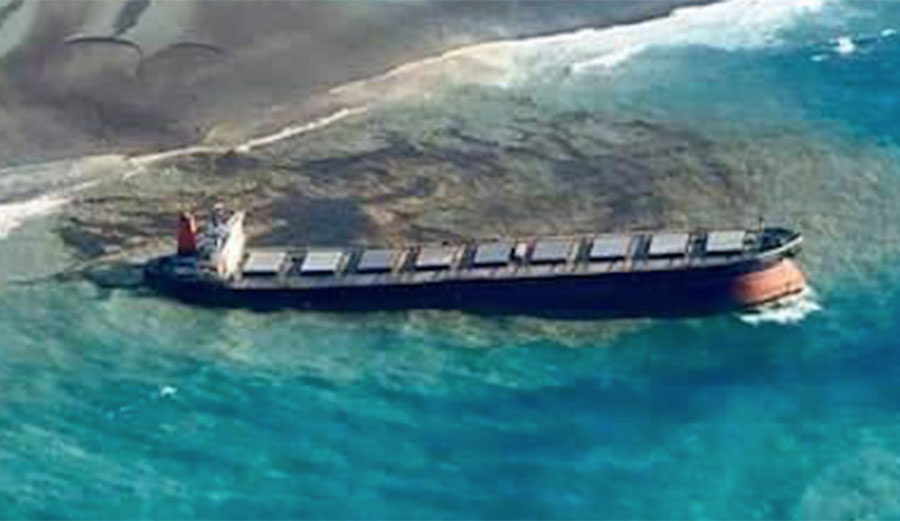 The MV Wakashio ran aground on Jul 25. Now surfers are signing an open letter to the shipping company responsible. Photo: Surfactionism.com

On July 25, a ship loaded with 200 tons of diesel and 3,800 tons of oil ran aground on a coral reef in Mauritius. It was — and very much still is, despite how quickly the news cycles tend forget these things — a disaster of nearly unimaginable proportions. Now, surfers all over the world are being asked to sign an open letter addressed to the company responsible for the spill.

“The blue waves and beautiful shores of the Southeast & Eastern coast of Mauritius are covered in oil,” reads a press release. “Whales, dolphins, rare birds, sea turtles, and all manner of marine life are dying. People who rely on fishing and tourism to feed their families have worked tirelessly to lead the clean-up. Their lifestyle and livelihoods have been destroyed and will be impacted for years.”

The campaign, which was created by the Sea Users Association (SUA), calls for fair compensation to those affected by the accident. SUA was approached by sea and coastal users in the area who might not have the means to hire a lawyer to fight for their claims.

“We don’t know how long it will take for the ecosystem to be restored, and for how long the sea will remain unsafe for fishermen, as well as for those using the sea and the beach for tourism and leisure activities,” said Virginia Lamarque, President of SUA. “Consuming seafood from the affected region is now prohibited and the risks to health arising from consumption are still unknown. Many direct and indirect consequences may only be known over time. The impact goes beyond measure, from the fishermen and local businesses to the inhabitants of the region.”

The tanker, named the MV Wakashio, was owned by the Nagashiki Shipping Company. Within days of the accident, oil was seen spilling from the vessel and into the surrounding waters. Authorities and locals banded together to launch cleanup efforts, but they were hampered by high winds and large waves. Prime Minister Pravind Kumar Jugnauth declared a state of environmental emergency and called on the international community for help.

Emmanuel Macron, the president of France, announced that the country would be sending equipment from the nearby island of Réunion, along with crews to deal with the spill. Japan has also sent a team, and Japanese officials say they are taking full responsibility. They’ve vowed to do everything in their power to “resolve the issue.” A few days after the accident, the executive vice-president of Mitsui OSK Lines, Akihiko Ono, released a statement saying he is sorry for “the great trouble we have caused”.

“We ask the Insurer of the Wakashio the Japan P&I Club, Nagashiki Shipping Co Ltd, Mitsui OSK lines Ltd, as well as those responsible for the wrecked ship, to pay out the maximum possible to help rebuild lives and clean up the mess,” the open letter reads. “The impact on the environment and on livelihoods is going to be immense — don’t run away from your responsibilities and look for loopholes in evidence. The payout must be to the maximum that is legally possible.”

Like most surfers — or anyone who spends a fair amount of time in the ocean — the local community of surfers on Mauritius are angry. “As surfers, we get to share a special bond and relationship with the sea,” said Jerome Bonieux, a local surfer. “The coral reef is our church and the turquoise water our holy water. Seeing this massive ship crushing our reef for days, only one km from my home spot, was really heart-breaking. The 1,000 tonnes of oil that leaked in our lagoon has caused massive damages to the livelihood of all the sea users in the area. Having other surfers from around the world join hands with us will be crucial in keeping pressure on the people to be held accountable for this tragedy. Accidents like this can’t happen in 2020, we cannot accept this!”

Once the letter gets enough signatures, it will be sent to the insurer of the Wakashio, the Japan P&I Club, as well as the Nagashiki Shipping Co Ltd. For its part, the shipping company has said it “will respond in good faith to any damages in accordance with applicable law.”

Add your name to the letter here.