An Angry Sea: What Happened at Malibu Should Have Surprised Exactly No One 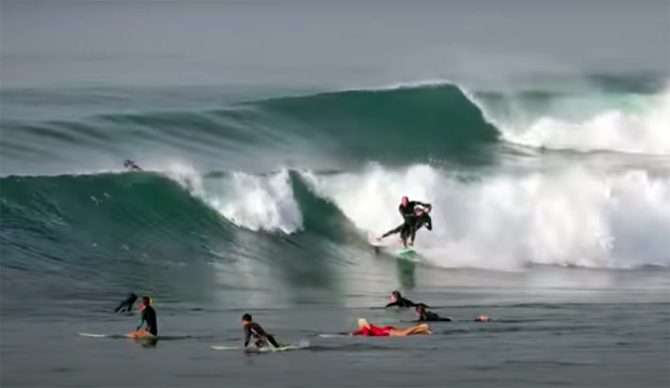 Where have we seen this before? Photo: Brad Jacobson//Screenshot

It was a perfect storm, at least so far as Surfrider Beach in Malibu, California, was concerned. Hurricane Frank, spinning like a top in the warm Pacific off the coast of Mexico, pulsing robust SSE swells toward the West Coast that by early August  would deliver the best waves of the summer at any number of lucky SoCal spots — but especially Malibu. Six to eight-foot surf, advantageous tides, light winds and a heat wave: what’s not to like?

Plenty, it seems, at least judging by online reaction to footage of the fabled point’s early August swell-fest, which saw commenters from around the world howling in outrage at video depictions of the crowded, chaotic lineup and the mayhem that ensues when literally hundreds of surfers of widely varying skill levels vie for self-expression all at the same time.

As if the logjam were something new, or more to the average vitriolic commenter’s point, something aberrant.

It’s not. Hasn’t been for a very long time…if ever. Let’s forget ancient history, including passages like this from an issue of Hawaii’s Paradise in the Pacific magazine, published in 1897: “Down the front of these swift combers rode every hour scores of men, women and children, crouching, lying or even standing upon their shooting surfboards.”

A single score, by the way, being defined by Webster as “a group of 20.” Meaning that, most probably, few of our Polynesian progenitors were ever “alone with the surf and their thoughts.” Nor were pioneering North American and Australian surfers during the early 20th century who, unless grainy photos and footage have been lying to us all these years, apparently never went surfing alone, and, in fact, rode the vast majority of the waves they discovered along then-virgin shores either in front of or behind a buddy.

Focus, then, on modern surf history, which, for discussion’s sake, I’ll assert began in 1960, with the advent of the polyurethane foam surfboard. And I’m choosing this pushpin on the timeline having just streamed a surf movie that I’d never seen before: John Severson’s The Angry Sea, first released in 1962. Keep in mind, the footage therein was shot primarily in 1961, which means only about 12 months after the widespread transition from balsa to foam. This surfing thing was new, man. And many of the lineups depicted — Rincon, Malibu, San Onofre, Swamis, Windansea — were already packed! Not just crowded, but with surfers of all stripes dropping in on each other, taking off behind, running each other over, boards and bodies flying. A wintertime Redondo Breakwall session looked more like a demolition derby than a surf session — and unlike today’s lightweight and/or styrofoam-epoxy boards, these guys were pearling, bailing and kicking 35- pound, one-inch redwood-stringered projectiles into their buddy’s crotches. 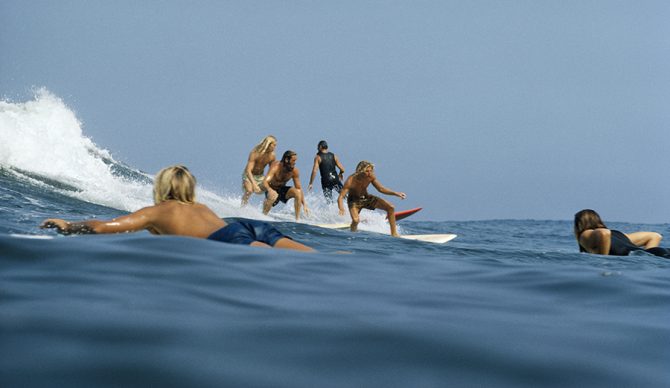 Even when Severson shot more out-of-the-way breaks, like Lunada Bay or even then-unnamed waves in Northern Baja, surfers seemed compelled to take off together, one inevitably getting stuffed behind the curl or both resigned to performing uneasy go-behinds, moral authority uncertain. During one particularly well-attended session at San Clemente’s Cotton’s Point, a young Mickey Muñoz is shown trimming across a left wall, only to get dropped in on in the shore break. Incensed, once past the interloper Mickey turns and gives a middle finger to what narrator Severson deemed, “the guilty party.”

This is what was happening in 1961-62 — so much for the good ol’ days. Truth is, nobody under the age of, let’s say 80, has any right to complain about crowded lineups, or the fact that they don’t get to ride waves at breaks like Malibu with nobody else out. Nobody ever rode Malibu with nobody else out, Tom Blake and Sam Reid having shared the horse-drawn wagon ride to that classic bend in the coast in 1926, where they reportedly slid their first wave together. And still, many of the online features and subsequent comments following the August swell at First Point contained consistent lamentations about how virtually impossible it is to get a wave to oneself at Malibu. Well, of course it’s virtually impossible. Not because it’s crowded, but because surfers almost uniformly refuse to share with one another.

Don’t believe me? Then picture this: The 2007 “Corral Fire” in Malibu, which saw the Pacific Coast Highway blocked at Webb Way, three blocks west of First Point, and Sweetwater Canyon Drive, three blocks east of the Malibu Pier. No thru traffic allowed, the surf three to five feet and clean, the wind straight offshore and only three surfers in the lineup: one legendary Malibu fireman, cooling off after a hot night on the line, and two equally legendary locals, both Malibu realtors and both of whom lived within walking distance to the point. A witness later described in print a particularly fine set wave on which the two locals rode together in what he called, “…a dynamic, fluid duet, both resident surfers celebrating the joy of having the ordinarily crowded lineup to themselves.”

Bullshit. Presented with a once-in-a-lifetime opportunity to surf Malibu with only two other guys out, one of the legendary Malibu locals still dropped in on the other and they fought for position, crossing each other’s wakes, checking their turns, breathing on each other all the way to the pier.

That during the Hurricane Frank swell one of these two would end up losing his real estate job following an angry, Rumpelstiltskin-like tantrum that went viral, and which was really just a natural extension of the surfing ethic on display that day back in 2007, should really come as no surprise. It’s what happens when surfers cannot, and more importantly, will not share with each other.

But let’s save that topic for the next big swell at The Superbank.