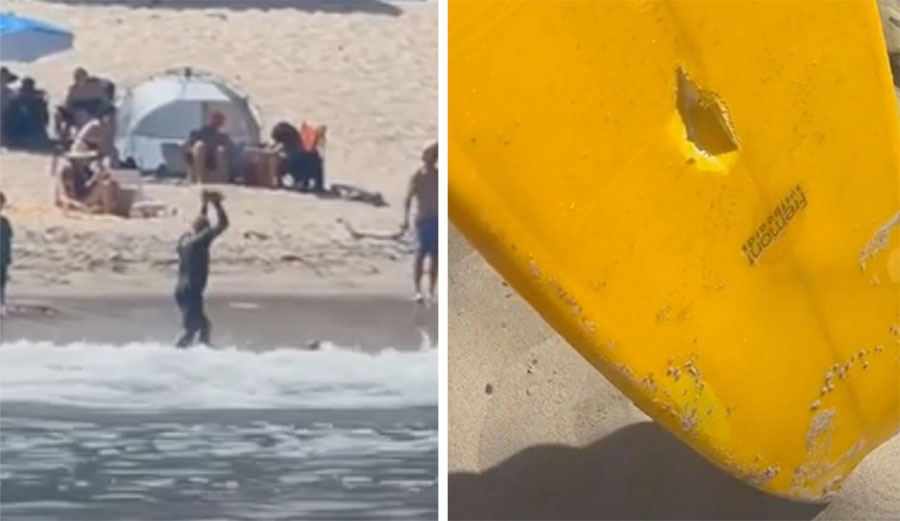 Andy Lyon decided that a rock needed to be implanted into this surfboard and the consequences for his actions are proof that it’s not okay anymore. Photos: Screenshot/YouTube

In the first week of August, a Malibu resident named Andy Lyon took off on a wave at First Point. But when he took off on that wave, he burned someone, as is very likely to happen there. A small collision occurred — which is also very likely to happen there — but what Lyon did next cost him his job. Violence in surf lineups used to be a little more acceptable when surfing was still just a fringe activity. But now that it’s a full-blown sport with its own league and a giant industry around it, the days of window waxing, leash cutting, and water boxing are vanishing in the rearview.

Lyon has taken off on plenty of waves in his 50-some-odd years surfing what has now become one of the most crowded waves in the world, and he’s one of the few people who can actually be called a “local.”

After the collision, the 59-year-old proceeded to chase the other man’s board into the beach, pick up a large rock, and bash a giant hole in the bottom of it. That wasn’t quite enough for Lyon to make his point, though. He then took the surfboard, paddled back out towards the pier with it, and let it go. The other surfer, who hasn’t, as of this writing, been identified, is described as “in his 20s.”

In the comments section of a now-deleted Instagram account, Lyon claimed that the other man involved in the incident had been being “a disrespectful punk on a piece of shit retro board” who was “trying to race me up the point.”

As is the case with most things these days, the whole incident was caught on camera. It hit the internet — YouTube, TikTok, Instagram, etc. — and went sorta-kinda viral. An Instagram account called @andylyonisakook dedicated to seeing Lyon held accountable for his actions popped up. Lyon was dubbed “the angriest man in surfing. “And then Lyon, who worked for The Agency Malibu, was canned from his job.

“The Agency was founded to create a unique group of professionals focused on community and camaraderie within the real estate industry,” his employer wrote on Instagram. “We endeavor to be pillars in the great Malibu community and foster an environment that promotes integrity and respect. Upon learning about the incident involving Andy Lyon, we have decided to part ways with this individual. The Agency emphatically denounces the individual’s behavior, and our hearts go out to those involved in this incident.”

Lyon has been a fixture in the Malibu lineup for a long time, and his salty demeanor is pretty well established. So established, in fact, that Hunter Jones, Lex Weinstein, and Kassia Meador gave him an award for being the “Saltiest Local” in the World Surf League’s (De)Tour Series. The celebration of being the saltiest local is a bit of a throwback to an age when being a salty local was considered something to be proud of, but times are changing.

Lyon is from a generation where the kind of action he took wasn’t quite so frowned upon. It was seen as a way to regulate the lineup, to keep the crowds down and the place safe, and the locals were the ones who generally dealt out the punishment for infractions.

Think of Pipeline, back in the day. “Catching cracks” from the Pipeline Posse or the Wolf Pak kept the hierarchy intact. The Bay Boys at Lunada famously used violence and intimidation to keep what they saw as “their” wave as empty as possible. As time has progressed, however, the Pipeline lineup has become a little less defined in the absence of a regulatory force and the Bay Boys are pretty much defunct.

And although Malibu hasn’t ever really been a place like Pipe or Lunada Bay, there did indeed used to be some semblance of a pecking order. But in a place that has around four-million people living just down the road, the number of so-called “locals” is so high that all the rules have gone out the window. Everyone, except for a few people like Lyon, appears to have basically given up on following the unwritten rules of surfing. It is a little ironic, though, that Lyon was in the one ignoring the unwritten rules in the first place, yet he took it upon himself to enforce them because he felt he deserved more waves simply because he’d been surfing there for longer.

Malibu is a free-for-all now. Every wave has multiple people on it. Regulating is no longer possible, unless everyone surfing there agrees that the rules should be followed again. And the backlash to Lyon’s action is proof that attempting to regulate with violence is no longer acceptable.