If This Is the End for Kelly Slater, There’s a Single Number That Will Define Him 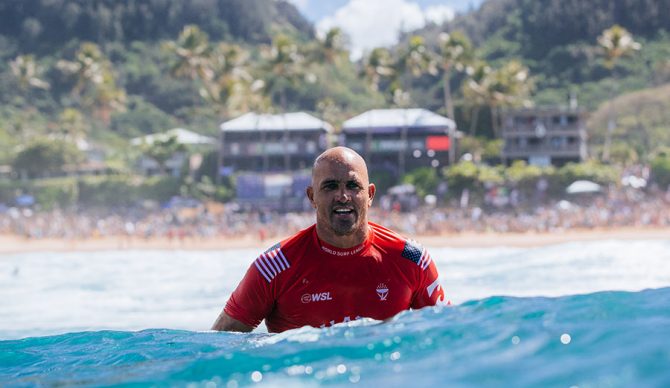 A lineup Kelly Slater is so very familiar with. Photo: Tony Heff/WSL

What you see above, in pure numerical terms, are Kelly Slater’s Pipeline finishes through the years.  His last finish, you may have heard, was this week. Twenty-nine events, eight wins, the final victory just six days before his 50th birthday. He hasn’t missed an event. In 1992 he was the youngest ever Pipe Master. Now he’s the oldest. And while it may be obvious, only one of those numbers is guaranteed to define him.

In between his first and last event, there’s such a degree of continued excellence at Pipeline that to call it merely consistent is to severely degrade the achievement. In the 29 years he has only had one early-round loss. That was in 1997, in a defeat to Johnny Boy Gomes, who had surfed from the trials and would go on to win the event. Kelly by that stage had already secured his fifth World Title. In 21 of the 29 events, he’s had the equivalent of a semifinal finish or better.

In this latest incarnation, Slater’s average heat total was 14.70, eclipsing his two-wave career average at Pipe of 13.92. Only John John Florence, who has surf 13 Pipe Masters shades him on that. In the 2022 field, the next in line was Jordy Smith with a career average of 11.01. Everyone else who surfed is in single figures. Slater also has the best winning heat ratio of 71 percent, just a percentage point above Gabriel Medina and Florence.

We could go on. In surfing, Kelly’s career, especially at Pipe, on almost every metric, he is incomparable. Heck in any sport, pick any GOAT, and the numbers probably won’t stack up.

Now obviously, this win felt different. The numbers don’t show the emotion. If you wanted to dive deeper, to understand more, you could employ a NASA supercomputer and go all Beautiful Mind into the mathematics of his Pipe success. Or you could simply stare at the instantly iconic Brent Bielmann photo of a crying Slater being paternally cradled by Seth Moniz in the water just after the win (below). The numbers don’t show the skill, the bravery, or the emotion. They don’t illustrate what it takes to spend three decades of your life chasing the same goal.

The stats don’t also predict what happens next. Is there more data to be added to the set? “This may be it for me, I’m going to have to have a talk with myself before Sunset,” Kelly said during the awards ceremony interview.

It was, as ever when it comes to Slater’s retirement plans, suitably cryptic. Kelly and competitive surfing have had a “will they or won’t they?” relationship for almost a decade. There’s obvious unresolved sexual tension, and surf fans simply must watch on and see whether Kelly can resist going into a full-blown relationship, or simply walk away. 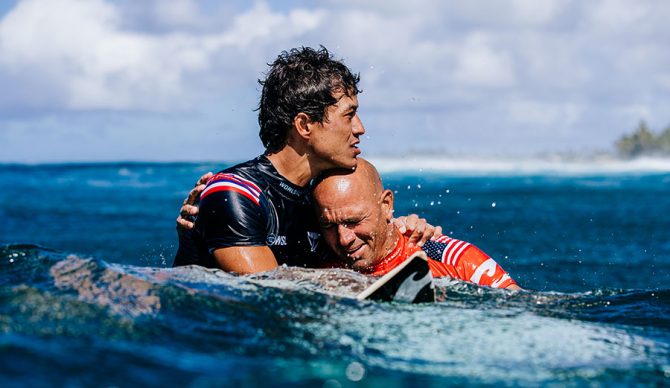 An image that has quickly become iconic. Seth Moniz and Kelly Slater, after the final. Photo:Brent Bielmann/WSL

You might remember in July 2018 when Parko announced his retirement at J-Bay in a carefully planned media launch. A few hours later whilst guest commentating in the booth, Slater immediately dropped his own end date announcement, stating that the end of 2019 would be his last lap. Except it wasn’t.

Now after this Pipe win, he’s yet again dangled the carrot, throwing doubt even on his involvement at Sunset, due to start in just four days. The Australian leg and Kelly’s vaccination status, the elephant in the room, also hasn’t been addressed, if we discount the Australian Sports Minister, who said, “I reckon Kelly knows the rules. It doesn’t matter whether you’re a surfer, or a tennis player, a tourist, or anyone else, they apply to everyone.”

Given the radio silence, “Kelly, are you vaccinated?” is one simple post-heat question that surf fans might have expected him to be asked. Especially since the answer could actually keep him from competing and essentially force his retirement.

But there again, it starts to get messy. Maybe it’s best to just stick to the numbers; they are clean, they are straight forward, and they don’t lie. For 30 years Kelly Slater has maintained a level of excellence at Pipeline that defies logic, age, and human endeavor. Kelly called this victory his best yet and he’d know. Surely, the number “one” is the fitting end to that beautiful mathematical sequence.