Surfing Can Never Slide Far From Its Spiritual Source 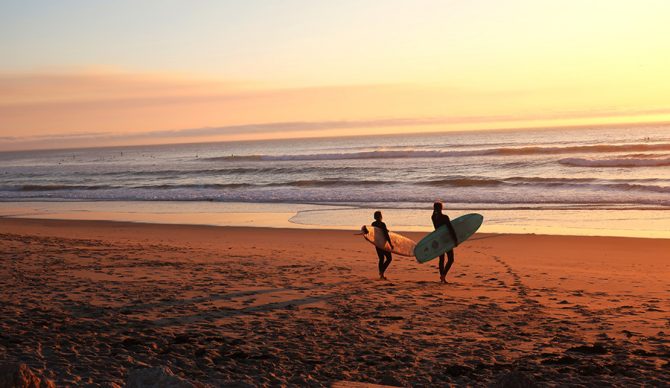 We’re all drawn to it.   Photo: Sacha Verheij//Unsplash

Win Butler of indie giants Arcade Fire gave a recent interview on BBC Radio 6 Music in which he discussed the musical influences on the band’s new album We. David Bowie’s 1971 Hunky Dory is one such seminal force. Win goes on to tell of the “soup of influence” that can be heard even in the music of a fully formed artist like David Bowie. Of which, in his eyes, Bob Dylan and Neil Young are two.

This idea hit me for six while striking a chord across my parietal cortex (in other words, it got me thinking). Got me thinking how as surfers, we are the same. Whether it’s on a conscious or subconscious level, we look back to inspire us forward. This is pertinent to the surfer as an individual as well as the whole evolving mass of surf culture. The keels are engaged, and they are round-housing us back to the energy source.

Without wanting to sound cliche, I will bring the cliche-riddled rubber band into this. The further surf culture gets stretched from where and why it started, the more energy it attracts to ping back, and the faster it will get back. Just like the fabled rubber band.

Every surfer can remember the feeling their first wave gave them (whitewash doesn’t count). The clued-on ones keep this intangible sense close to their chests. As surfers, we push for bigger waves, for harder turns, for longer barrels – we explore it all to catch a little sniff of that first light-bulb moment. Often, it will elude us. The unshakeable hand of time makes this feeling a harder one to find.

The same can be said for surf travel. Surfers travel to extensive ends in the blind hope that they capture something from their youth. Family camping trips down the coast when waves were chomped down just as fast as cornflakes. Tooth, nail, boat trip down payment – we are in a constant search for new territory to stoke the fire of our eternal gromhood. We all have the same seed within us that fuels our desire to surf. Some seeds are nurtured, others are left to the worms, but they were all once planted. 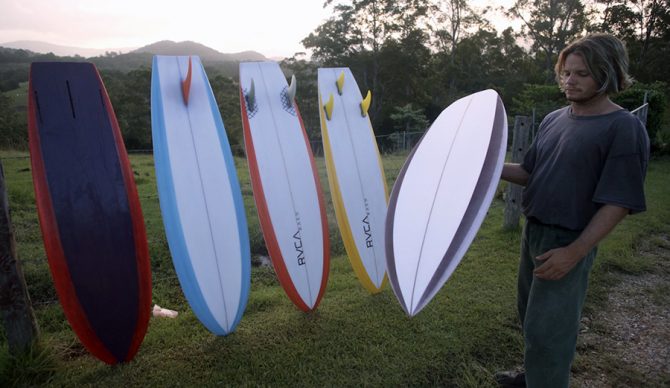 Ellis with his creations. Photo: RVCA

Look at surfing as an absolute and the same principle can be applied. The further into the future we go the more our culture craves its origin. The purple patch before mass exposure, energy drinks, and three full-roter waves existed. In a time when moving along the face of a wave wasn’t such a contested commodity. When making every section count wasn’t a necessity. When surfers had time to appreciate the wave-riding experience for what it is, nothing more.

This is it. To connect with energy supplied by dense air molecules that move across vast oceans chasing low pressure. The spiritual source of surfing hums underneath the noise, you just have to dig a little deeper to find it in the current state of play.

One example, in a literal ocean of them is Byron Bay surfer-shaper Ellis Ericson who has taken inspiration from George Greenough’s Edge surfboard designs into the bay. Grassroots, out-of-the-box, original-thinking, Greenough came up with his Edge theory in the early sixties and has been tweaking it ever since. With the guiding eye of his Yoda, Ericson has given the concept a new field of vision – creatively shaping his way into the unknown while tapping the past for influence.

The surfboard you wax up has an inescapable parallel to how you move on a wave. Jumping on a thick single fin every now and then won’t make you a weaker surfer. Yes, it will slow you down, but in an age of acceleration, a weighted dose of the slow is exactly what is needed.

Surfing isn’t solely a soul-arching-and-searching quest. It’s also a lot of fun. Hanging out and surfing with friends and family is one of the funnest things in life. Surfers don’t, however, dedicate their every thought process, daily action, and entire lives to the act just because it’s fun. There is something else going on here.

If done for the right reasons, this slide to the source may just be what will save surfing from going too far down the shaved-armpit rabbit hole. Like musicians or the savannah animals, maybe us surfers, all we’re trying to do is get back to the watering hole. To where it all began.