Win or Lose, Teahupo’o Could be Kelly Slater’s Last Stand 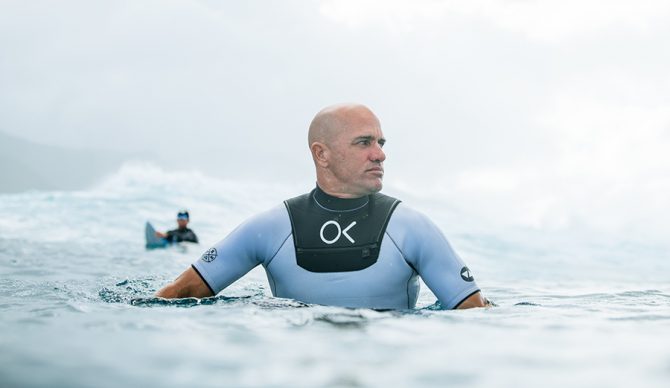 It’s been said before. But could it be real this time? Photo: Beatriz Ryder//World Surf League

Could today be the last time we see Kelly Slater surf in a contest singlet? With the Outerknown Tahiti Pro set to finish, the GOAT is just three heat wins away from securing a record sixth CT victory at Teahupo’o.

If he were to win, heck even if he weren’t, surely it would be the ideal time to, once-and-for-all, for real this time, announce his retirement. It would bookend a season that started with a Pipeline win and be the first lap since 2013 that he would have claimed multiple CT victories.

After that incredible Pipe Masters, many thought it was the perfect time for Kelly to leave competitive surfing on a high. That was his eighth Pipe Masters title, won 30 years after his first in conditions as good as the event had seen in its history. At the time he described it as the “best win of his life.” Given it was his 56th CT win, that was no small claim.

However, it seemed that victory only fueled Slater’s motivation. The carrot of the WSL Finals at Trestles, and a shot at a 12th World Title, was a narrative arc that Kelly couldn’t resist. It also wasn’t unrealistic. With G-Land, J-Bay, and Teahupo’o on the calendar, the head start he’d given himself at Pipe meant he had a real shot.

Yet in the next five events in Hawaii, Australia, Europe, Indonesia, and Africa, he won a single heat. The narrative arc had turned into a screeching nosedive. With the WSL Finals and a World Title out of reach, he withdrew from El Salvador and Rio. J-Bay, his other spiritual home, brought no further salve.

Now as we wrote back after Pipe, Kelly and competitive surfing have had a “will they or won’t they?” relationship for almost a decade. The unresolved sexual tension has been a backing soundtrack to the tour since he turned 40.

In July 2018, you may remember Parko announced his retirement at J-Bay in a carefully planned media launch. A few hours later whilst commentating in the booth, Slater immediately dropped his end date announcement, stating that the end of 2019 would be his last season. Except it wasn’t. In that case, injury and COVID, played their part, but now, having had a full injury-free (ish) run at a world title, and come well short, can the 50-year-old sustain another year battling surfers half his age?

Which brings us back to today in Tahiti. Chopes is the other wave, apart from Pipeline, that has brought him the most competitive success, benchmark performances, and emotional highs. As an added motivation, it is the event that he also sponsors. In terms of setting up a mic drop, it couldn’t be better.

And even if he were to lose in the quarters, semis, or final, the chance of him calling it a day remains as high as at any time in the backend of his career.

But, oh, praise be, what if he was to win? What if he were to slide into a blue-green buzzer beater in the final? Imagine him dropping in late, and navigating an eight-foot barrel with that no-hands, timeless grace. Picture him being ejected into the channel in a cloud of spit, arms aloft, to a chorus of victorious cheers. If there was ever a time for one of the great athletes of all time to retire, surely it would be there and then. Here and now.

All that could happen today. It could be Kelly Slater’s last stand. And what a stand it’s been.

Watch the WSL Tahiti Pro live on Facebook or at WorldSurfLeague.com.