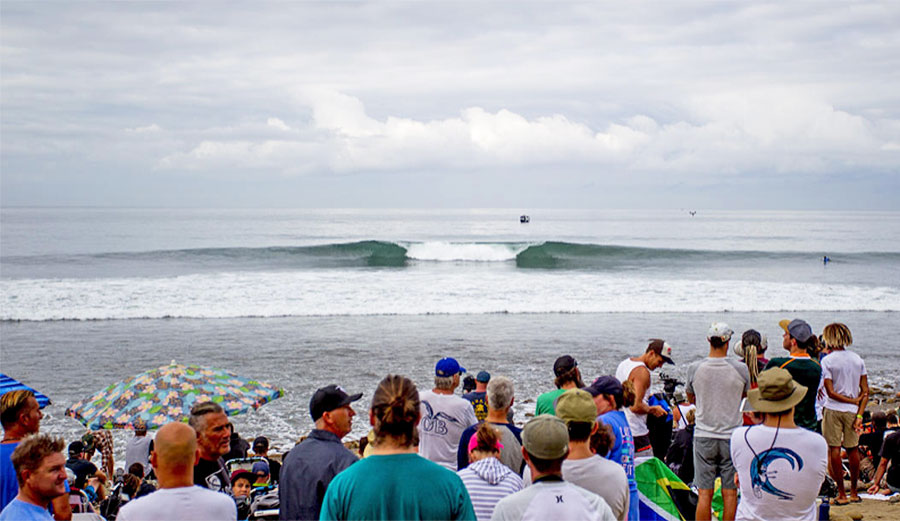 The conditions were great for Finals day for the 2017 Hurley Pro at Trestles. Photo: WSL/Kenneth Morris

September is generally a pretty good month at Trestles. It’s relatively predictable and, thanks to its favorable south swell exposure, is easy to forecast. To say nothing of the wave quality, that’s why the World Surf League decided Lower Trestles would be where the Rip Curl WSL Finals will take place. And the forecast is looking good. It’s still a ways out, but if all goes according to plan, the final day will be a good one.

The Rip Curl WSL Final, which runs from September 9-17, has a different format than prior years. Instead of the old days-long contest, it’s a one-day, winner take all event.

Although it’s still a little too far out to accurately call what the conditions will be, forecasters and the WSL are all expectantly hopeful that the long-term forecast will pan out. As of September 2, there are three storms swirling off shore that could deliver solid waves within the waiting period.

“The waves will pick up on the 11th-12th thanks to a low near New Zealand right now,” Surfline’s Director of Forecasting Kevin Wallis told the World Surf League. “This storm isn’t a monster, either (peak seas modeled at 25-30′), but it does take a pretty good track with strong high-pressure support on its western flank that helps widen the fetch.”

As well, another storm is looking as though it could add a larger bump to Southern California’s most famous wave.

“Another storm that’s expected to track through the central South Pacific over the coming weekend potentially sends a larger SSW swell for the 13-15,” Wallis continued. “Similar to its predecessor, this storm could have good high-pressure support on its western flank. It also looks like a stronger storm that’s closer to Southern California. These are all positives. Current model guidance indicates overhead surf at Lowers with a decent chance of more consistency.”

Last month, forecasters gave a longer-term forecast to event organizers. And although accurately forecasting a swell more than a few weeks out is generally on the same level as fortune-telling, it appears that that forecast is panning out.

“Interestingly, this pattern jives fairly well with the climatological outlook we provided the WSL with over a month ago,” Wallis explained. “That very-long-range outlook offered one key takeaway: there’s a strong chance of above-average surf at Lower Trestles during the September 9-17 window.”

Watch the 2021 Rip Curl WSL Finals at Trestles on Worldsurfleague.com.