5 Times Authorities Cracked Down on Surfers Amid Coronavirus Pandemic 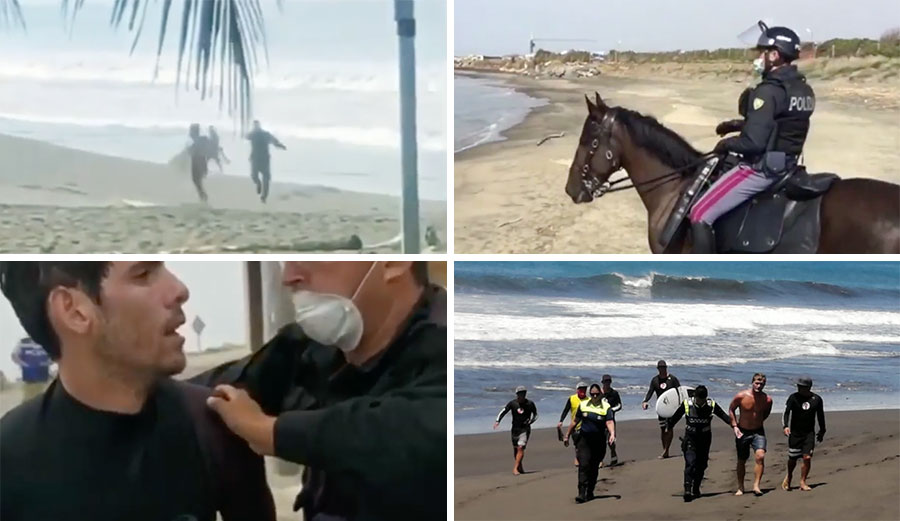 We’re living through some weird shit right now. There’s a virus burning through the residents of Earth, and the only thing we can do to fight it is to stay away from each other. Countries are locked down. Shelter in place orders are in effect. People are dying and hospitals are overwhelmed. Surfers, however, are often prone to thumbing their nose at the man, so when the man says “hey, stop surfing” a lot of surfers say, “screw you, I’m surfing.” But when taking a few weeks (or even months) off surfing means potentially saving the life of someone old or immunocompromised, it shouldn’t really even be a question. Just do what scientists say we should do and stay at home as much as possible. Still, though, since surfing is really fun and everyone’s off work, people are riding waves. And the police are cracking down all over the world. Here are five examples.

1. Punta Hermosa, Peru
According to reports, Peruvian officials arrested this guy for violating the quarantine and going surfing in Punta Hermosa, just south of the country’s capital, Lima.

2. J-Bay, South Africa
Jeffreys Bay is home to one of the world’s best waves, so one could see how it would be very, very tempting to paddle out. But the cops there aren’t having it.

3. Costa Rica
In perhaps the most egregious of all the surfing-related stay-the-fuck-at-home episodes, a surfer who is apparently Simon Rex, can be seen actually getting shot at by Costa Rican police. According to rumor, Rex was in Costa Rica filming for Snapt4. “Waves were firing but so were the cops,” he wrote, “so I split.”

4. Hermosa, Costa Rica
Apparently, a few days before Rex was running from hot lead, Noe Mar McGonagle, a surfer out of Pavones, Costa Rica, was detained by officials for surfing while the country’s beaches were closed. According to reports, he was only fined for his actions. A few days later, he took to Instagram to apologize. “I want to apologize to the Costa Rican people, police, and Garabito Lifeguards,” he said. It is hard for an athlete to not be able to surf while people can go for a run or ride a bike. We are human and sometimes we make mistakes. I want to lead by example and encourage everyone to stay home.”

5. Italy
Of all the places to respect a quarantine, Italy might be the most important. It is one of the hardest-hit countries, but while most Italians were staying indoors, one guy was out surfing. The police were not happy. Body cam footage released by Italian police shows a pair of officers on horseback waiting for him to come in. While it’s not clear if he faced any charges, the police spread the video around on social media to try and encourage absolutely everyone to do their part.