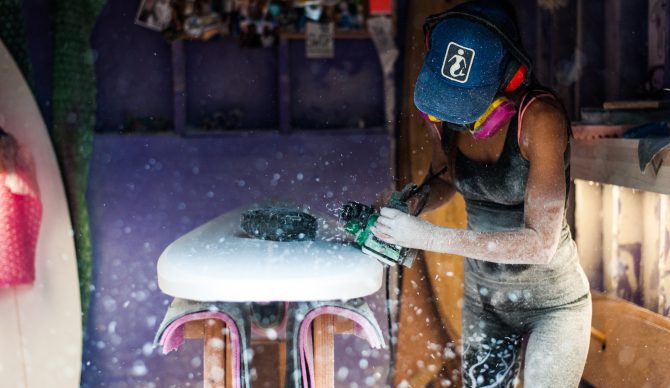 Shape like a girl, because it’s awesome. Photo: Laurent Chantegros

Surfboard building is unlike any other trade – there’s no formal training or trade schools. Hand shaping surfboards breeds a culture all its own, interconnecting generations with knowledge and tradition passed down from one to the next. Techniques are often unique to each shaper and refined over time, and eventually given to someone else to progress knowledge. Mentorships, which often spring from within intimate circles in shaping bays or sanding rooms, have mostly been a benefit of the guys-only club. It can be a tough one to break into.

“Have you ever used a power tool?” was the first response I received when I expressed interest in shaping a board to my friend, who I deeply admired as a surfer and shaper. It’s not uncommon for women to face challenges of legitimacy in trade jobs, but often the biggest hurdle for women in surfboard shaping is simply picking up the planer for the first time.

Here are five women that did, thankfully. They build surfboards for the pure love of the craft, and while doing so, have unintentionally pioneered women’s shaping. 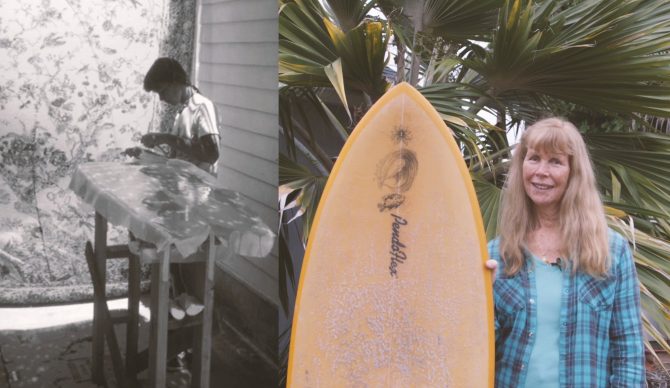 Pendarvis making a fish during her college years, and today. Photo: Screenshot/Las Shapers.

An original female trailblazer in the water and in the shaping bay, Cher Pendarvis has witnessed many changes in surfboard design throughout her life. In 1965, Pendarvis began repairing boards, which eventually led her to making her own during her college years in San Diego (In the short film, Las Shapers, she recalls when the materials cost under $20.) As one of the first surfers to ride kneeboarder Stephen Lis’ new fish design in the early 1970s, Pendarvis began crafting shorter, faster, and more maneuverable boards under six feet while everyone else still rode longboards. In addition to shaping, Pendarvis wrote and painted. She still shapes alongside her husband Steve Pendarvis at Pendoflex surfboards and often adorns his boards with her art. She continues to do what she loves: surf, paint, and shape.

Learn more about the Pendarvis’ at Pendo.com 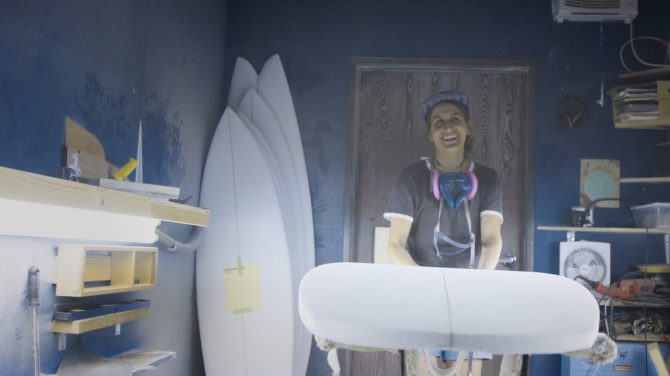 Christine Brailsford Caro first shaped a plywood paipo over 10 years ago and hasn’t stopped shaping since. She incorporates her talent for illustration, wood carving, and design into her label, Furrow Surfcraft, based out of Leucadia, Calif. Her designs draw inspiration from transitional-era surfboards of the late 1960s at the dawn of the shortboard revolution. She focuses on single fin eggs and twin-fin fishes that encourage fluidity, glide, and smooth rail-to-rail surfing (see paddle power, too). Brailsford Caro offers unique edged-bottom boards, influenced directly from the legendary George Greenough, who instructed Marc Andreini to share his innovative templates with a few select shapers, and Brailsford Caro was one of them.

See her designs at Furrowsurfcraft.com. 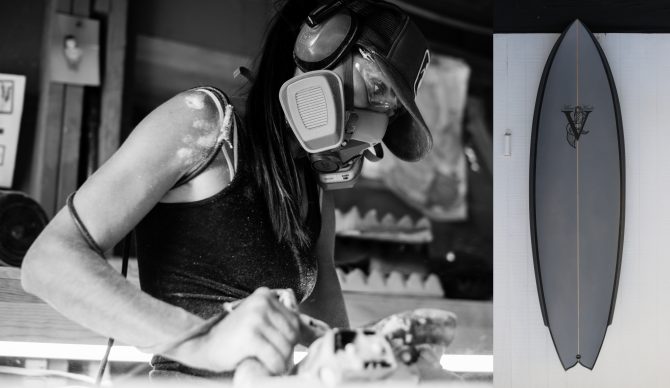 Valerie Duprat shapes out of her backyard in Encinitas and focuses on performance shortboards. Photo: Laurent Chantegros.

French transplant Valerie Duprat moved to California 20 years ago. Duprat, a biochemist and mother, was searching for a creative outlet and found that with shaping. It began as a hobby 10 years ago and evolved into a business, Mère-Made Surfboards (a clever play on words, as mère means mother in French). Duprat learned from shaper Matt Kinoshita, who taught her techniques and philosophies he’d gleamed from the Ben Aipa.

“For sure there are challenges in being a minority,” Duprat told me in regards to being one of the few female shapers. “However, being a female in a male dominated industry also opened up doors just because of the curiosity factor. With hindsight, having to prove myself harder boosted my determination to succeed and therefore helped my journey in the shaping world.” All of her boards are custom ordered and hand-shaped from the shaping room in her backyard in Encinitas. Duprat focuses on performance shortboards but also shapes longboards and fun shapes. 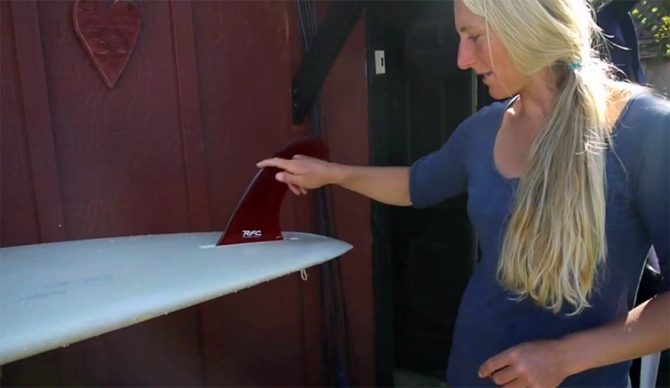 Ashley is a maker of fine craft. Photo: Screenshot

Goofy footer Ashley Lloyd grew up surfing Malibu and her shaping mentor, Danny Tarampi, was the first person to put a planer in her hands back in 2002. A few years later, Lloyd would join Bing as a team rider and shape her own signature longboard model. After gaining momentum with Bing, she branched off to create her own shaping company, Ashley Lloyd Surfboards, based out of Santa Cruz. Lloyd is also pioneering a future for sustainable surf craft (as most of know, the board-building process isn’t always environmentally friendly). She builds ECO boards using a bio based epoxy, recyclable eps foam, and flax cloth instead of fiberglass. Lloyd signs each board “Made with love,” sharing the gift of surfing while also caring for the environment.

See her designs at ashleylloydsurfboards.com. 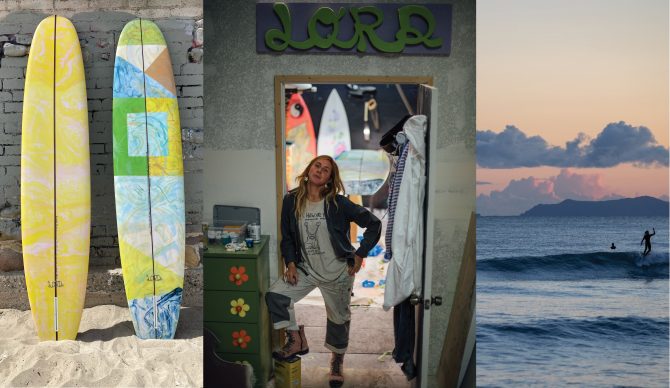 Rachel Lord was introduced to to shaping before she surfed. In her sculpture classes at the Rhode Island School of Design, Lord fell in love with the feeling of blending edges and carving objects out of wood. Lord bought her first surfboard at 29, frustrated at everyone that told her she wouldn’t excel at surfing after her teen years, and even more frustrated when nobody was willing to teach her how to build surfboards. She dove headfirst into the world of longboarding and hand shaping while living in Ventura, Calif., combining her love for art with surfing.

Lord has kept at the shaping craft since, and is completely self-taught through YouTube videos, books, blogs, and allowing the tools to guide her. She mentioned that it was difficult to gain confidence at first, but that process has since proven rewarding. “I was able to take ownership of my own process, not dependent on someone else’s approach,” says Lord. She’s now based out of Oceanside, Calif. under her label, Lord Bords. She told me that, “women often find shaping through art, which leads to a diverse point of view.” She comes from a New York and Los Angeles gallery scene and studio painting background, leading her to view her boards as an art form. She thrives off adding her own aesthetic, where she incorporates hand-painted foam, abstract foam stains, and 1970s-style fluorescent sprays to create colorful and energetic designs that are both fun to ride, and fun to look at.