7 Weeks Later: The Story of One Man’s First Post-Quarantine Surf in the Canary Islands 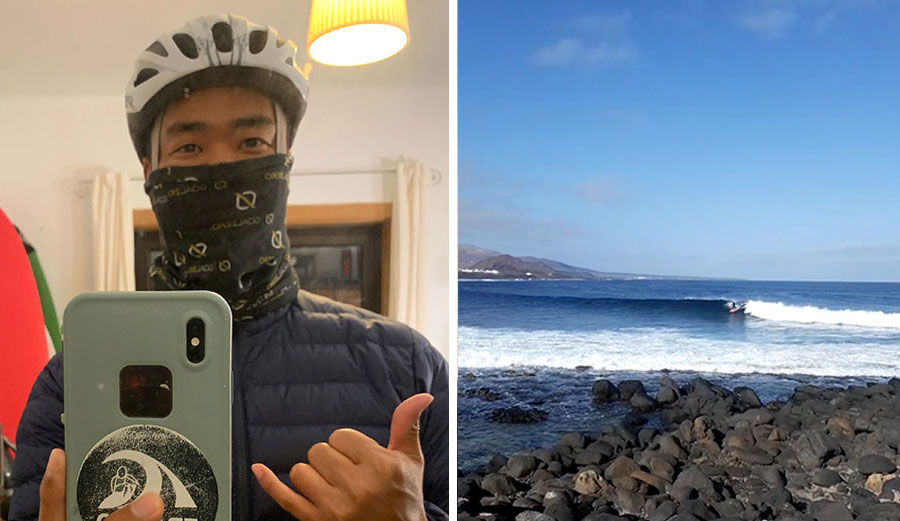 The Inertia‘s Mark Sawyer-Chu tells the story of what it was like to surf again in the Canary Islands after seven weeks of lockdown. Images: Mark Sawyer-Chu

At just after 5 a.m. on Saturday, May 2, Mark Sawyer-Chu‘s alarm went off. Outside, the sky was still dark. He threw the covers off, then went to the kitchen and ate a small bowl of cereal. With a neck warmer wrapped around his mouth and nose as a makeshift mask, he strapped his bike helmet on. Riding his bike down to the beach as the sun was just beginning to paint the horizon, he was excited. He hadn’t surfed in nearly eight weeks, and now, after almost two months of lockdown in Spain’s Canary Islands, Mark was finally going to get in the water.

Of Spain’s 25,428 Coronavirus deaths, the Canary Islands had 141. The first case was reported on January 31. A German tourist tested positive for COVD-19 in La Gomera, a craggy, volcanic island that’s the second smallest of the main islands in the Canary Island chain. Nearly a month later, on February 24, a doctor from Italy who was vacationing on Tenerife was the second person to come down with the illness that was in the early stages of its global spread.

Much like the rest of the world, the Canary Islands locked down. Everyone was ordered inside, and the Canarian officials took it seriously. “This is not a vacation,” wrote the Canary Islands Ministry of Health. “Your collaboration is essential to prevent the spread of the virus.”

For the most part, people complied. For seven weeks, residents weren’t allowed to leave their houses except to go to the grocery store or pharmacy, and even then, only one person per household could go.

And now, after what felt like an eternity, they are venturing out into the world again — a changed world, but the world nonetheless. The Great Pause has almost stopped, and slowly, things are starting up again. Canary Island surfers have some new rules to follow, though.

“It’s the first phase of the quarantine lift here in the Canaries of Spain,” Mark said into his phone as he stood in the dark outside of Oasis Surf House, a beautiful bed and breakfast guest house that he and his wife, Lydia, operate when he’s not coordinating partnerships for The Inertia. “We’ve been on lockdown for seven or eight weeks, so it’s been a while since I’ve surfed. Going to try and get out there today and see what it’s like. It’s just after six. The first phase is 6 to 10 a.m. You can go again in the evening from 8 to 11 p.m.”

Surfers aren’t allowed to cross municipal lines or drive their cars to surf. That wasn’t a rule that everyone followed, however, and some of the lineups were packed, like in Gran Canaria, another island west of Lanzarote.

“Most of the surfers, whether they’re Canarian or Spanish locals or visitors, are very respectful of the police and Guardia Civil,” Mark said. “However, there are a few going outside quarantine restrictions — surfing before the designated times to surf, driving in a car, and biking into other municipals — and risking backlash on the greater surfing community from law enforcement.  You would never see protests like the ones in America here.”

As of this writing, surfers in the Canary Islands are required to pick one session a day, although Mark said that some of them are ignoring that rule. Surfers must go alone and can’t drive to the wave they want to surf. And that’s not all. “If you bike, both hands must be on the handlebars and you can’t be holding a surfboard under one arm,” Mark explained. “You must carry mandatory photo ID to show which municipal you are living in.”

For those who don’t follow the rules, minimum fines start at €600 Euros, about $650 USD. And those rules aren’t just lip service. According to the Canarian Weekly, the first weekend that adults were allowed out to exercise or go for walks resulted in just over 700 fines in Las Palmas from the local police.

Mark, though, stayed in Teguise Municipal where he lives and ended up surfing a semi-secret spot that can hold a lot of swell. And of course, since no one had surfed in two months and weren’t in the greatest shape for surfing, it got pretty big.

“It was big and heavy, and I was stuck on a tiny 5’7. That was the only board I had stored in the village with an amigo,” Mark recounted. “The locals were on 6’6 step-ups or bigger. After getting a few liters of Atlantic seawater shoved up my nostrils, I ended up just sitting wide in the channel and watched everyone else get some epic rides. It was futile trying to paddle down those faces. Pumped to be coming out of home lockdown, but definitely not in any shape to be surfing big waves yet. I don’t think many people are ripping after such a long quarantine.”

As some parts of the world are beginning to recover from the pandemic that stopped the global community and has killed over a quarter of a million people worldwide so far, we’re all beginning to see what the new normal might look like. For those communities opening up again, a measured, cautious approach is required to ensure we don’t slip back into the darkness.

But there are still waves, and in time, this will all be in the rearview mirror, getting smaller as our memories fade. What will remain, hopefully, will be some kind of universal truth that, despite our differences, we’re all just humans who can be forced away from the things we love by a tiny virus — but by working together, we can help each other get back to doing those things sooner rather than later.

See more from Mark and Lydia on Instagram@thestokelife and follow Oasis Surf House.