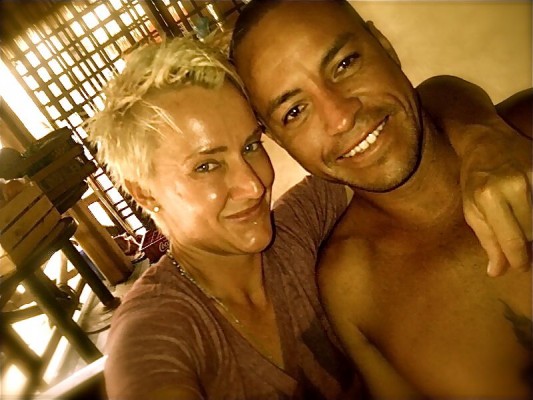 Even the best of the best have sessions where they go out and get nothing.

You just have to tell yourself that tomorrow is another day and another opportunity to get a good one.

That first swell continued to decline, but a new storm was forming off the coast of Chile with good direction and periods for Puerto. I was supposed to be flying back to LA in a couple days….Greg Long liked the way that storm was looking. Hmmm, yeah my flight was getting changed. Chi Chi Rodriguez is posting up and waiting for the swell.

The next few days Puerto wasn’t that great, and after a few frustrating surfs my filmer friend Chris and I decided to take Paige and her friend Nekoa to a couple of the points for a little change of scenery and to catch a bunch of waves, ride short boards, and feel what it is like to do turns again.

On the drive back from surfing a righthander up the coast, it started to rain… HARD. There was a crazy thunder and lightning storm all night. That INTENSE rain didn’t stop for a good 48 hours straight. Then it stopped for about an hour and then it started raining again. Paige had her flight out on day 2 of the storm. I was supposed to be on that flight, and I was kind of wishing I was just to escape the crazy storm that was pounding Puerto. But I knew waves were coming.

The next week it rained like crazy. Most of the boys had cleared out at this point to go to the Big Wave World Tour event in Peru. It would hit there first and then it would be coming to Mex. I spent the rainy days hiding out in my hotel room with a few excursions to La Punta, which after the intense rain had the best sandbar I had ever seen at that place. All the rain had blown out a river down the coast and it blew a bunch of sand out by the lighthouse, it looked like a reverse Superbank.

A few days later the big wave boys returned from Peru and the swell was starting to show. I remember going to bed that night and I could hear the huge waves crashing in the shore-break like thunder.

I was up early the next morning with my coffee as the day started to break, and we got our first look at what the ocean looked like.

It was ugly. It was massive, but it was all over the place. It just looked really out of control.

Greg and a few of his crew had paddled out at dark and were trying to figure out which peak to sit on. It looked really hard. As the sun grew higher in the sky, more brave souls ventured out.

I watched from the safety of the beach.

When I surf big waves I am very calculated. I know the risk I am taking when I throw myself out there, and I like to know that if the risk is high, the chance for reward is also high. If that ratio is not correct, I have no problem waiting until it is correct. I watched for 6 hours. For the first two hours nobody caught a wave. In the next 4 hours there was a 40-minute window where the ratio started to look correct to me, and then it got ugly again.

In that window I saw some amazing rides go down. The Peruvian Gabriel got two amazing barrels. One was just spectacular, huge wave, super late drop, I didn’t think he was going to make the drop or get under the lip in time but he did and then that barrel went so square around him and just blew him out so hard. I think Greg came out of one barrel and came close to coming out of another one but it clamped. There was a lot of clumpy ones, a lot of close-outs, a lot of drops that were just to hairy to make. I was really surprised nobody got seriously injured. Kohl got probably the biggest wave of the day, a massive left but right as he went to pull into that enormous cavern, he hit a phantom chop and went skipping down the face and then got obliterated. I think he hurt his back on that one. It was a really heavy wipeout.

Right around mid-day, a 20-foot cleanup set caught everybody by surprise. I saw my friend Silvia Nabuco’s 9′ 4” going over in the lip, and the wave was so big it made her huge board look like a 5′ 9”. It was a total yard sale of boards scattered everywhere and 3 or 4 more big waves in that set cleared the entire lineup.