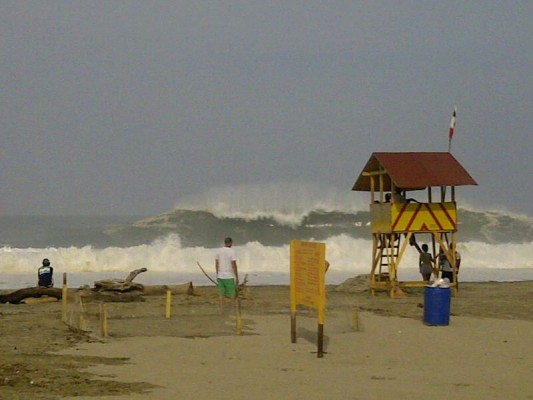 Not many people paddled back out after that. Everybody was ready for a break and the onshores were starting to pick up.

I went back to my room and was struggling with my decision to not go out there for the morning session. I knew it was the right thing to do for me, but it’s hard because you always wonder “What if? What if I would have got one of the few make-able ones today?” I knew the odds of that were almost nil, so I tried not to beat myself up to much.

Later that afternoon I decided to do some tow-ins with Dave Langer, Coco, Oscar, Koa and some of the other boys.

It was nice to get a bunch of waves out there for a change, and it was especially nice to have the life vest on for some of the beatings. I got a couple little barrels. But there were not a lot of make-able ones. I had one long barrel from Farbar that would have been so amazing, but I got clipped in the head so hard right as I was coming out of it that I actually saw stars for a few seconds. Oscar got an insane barrel towing. One of the Hawaiian kids that was with Koa got a couple nuggets, too.

The next morning it had dropped a little bit, but there were still some bombs. It looked much cleaner and more organized than the day before. I was amped. I was going to be leaving the next day, and I knew this was my last chance to try to get a bomb paddling.

I paddled out. It was kind of drizzling. It wasn’t that crowded – maybe because of the rain – or maybe everybody was tired from the day before. I was out for about 15 or 20 minutes, and then a set popped up out the back and I paddled out to it. I was almost going to paddle over it because I thought if I tried to catch it I would be too late, but something inside of me said “Just GOOOOOOOO!!!!!”

I turned around 3/4 of the way up the face and paddled into the thing – almost air-dropping into it backside. It was a heavy late drop, and when I got to the bottom I didn’t have the time to pull up under the lip in time before it came crashing down. I had to straighten out and then just got pummeled by the thing.

After taking the next few waves on the head, I got washed into the beach. I was feeling victorious for making the drop on that wave, but if only I could have got up in the barrel in time that would have been the wave of MY summer.

Two big swells, three broken boards, a few barrels, some tow-ins, 36 tacos, 28 cervezas and one heavy drop later, it’s time to say goodbye and thank you to Mexico for another awesome summer.